Share All sharing options for: Link Gumbo 5/4/12 - Every Man A King 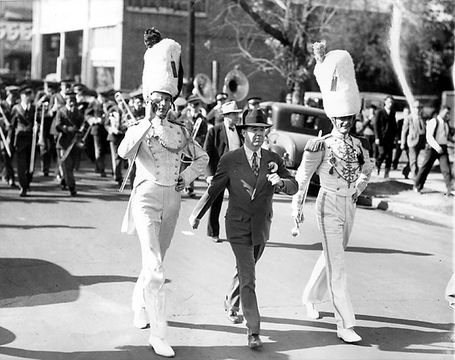 Gov. Huey P Long leading his favorite campaign tool, the LSU Marching Band. Because it's been that kind of a week in Louisiana

Like a lot of sports websites, we like to keep politics as a non-issue here. But sometimes it juts into the world of sports whether we like it or not, and in Louisiana this more often than not proves to be entertaining.

Firstly, there is the matter of the sudden firing of LSU System President John Lombardi last week. Thanks to some fine reporting by The Chronicle of Higher Education, we learn that Gov. Jindal, in tandem with something called the LSU Flagship Coalition (which counts Ragin' Cajun James Carville among it's membership) has essentially seized control of the Board of Supervisors and is pushing for changes that the LSU faculty does not believe are in keeping with the ideals of making LSU a top tier research institution. Lombardi being a roadblock to those changes is essentially why he was suddenly fired (officially without cause, I might add, so he still gets to draw a hefty sum for his troubles) The matter is worth some discussion (and if yall don't keep it civil down there I'm going to turn this blog around right now) but as the BoS has essentially rubber stamped every contract and proposal the AD has brought before it for decades, it's not a big issue on the sports side of things.

More connected to LSU, and the Honorable Kingfish above, is the uncovering this week by Fox 8 New Orleans of a shady, old, oil land lease contract from the 1930's that has quietly netted the heirs of Huey Long and W.T. Burton hundreds of millions of dollars over the years. The LSU connection comes from W.T. Burton descendants, the Lawton family. You'll recognize that name from either Jack Lawton Jr., who currently serves on the LSU Board of Supervisors, or more likely from Jack's uncle, William "Bill" Lawton, who was the primary contributor on the Bill Lawton Squad Room addition to Tiger Stadium a few years ago. So, thanks for that, Kingfish.

And then there is the matter of Tulane in a modern day political mud fight of it's own. It's much applauded plans for a new on campus stadium (which, all Greenie hate aside, is a really great move for both Tulane and the New Orleans HS football scene) are now, at least temporarily, derailed by a bunch of whining uppercrust in the surrounding Uptown neighborhood who don't want the noise or parking inconvenience of a 30K seat, D1A football stadium in their backyard (side note: "Tulane Football: NOT IN MY BACKYARD!" gets funnier every time I type it). Never mind that a little thing called Mardi Gras does that already every spring. Essentially, yesterday the NOLA city council passed a motion that forces Tulane to not only pass all of their construction plans to the city in advance, but allows the city to potentially disapprove of those plans, putting the whole future of the project at risk. Both Mayor Landrieu and Saints/Hornets owner Tom Benson have issued statements in support of Tulane's ambitions, so a drawn out battle may be on the horizon. Normally, I'd give the edge to the side that's supported by the Mayor and a hugely popular and influential local business leader, but this is a Tulane game we are talking about...

Back to actual sports news. There are somewhere around 20 press conferences happening in the world of college sports this morning. The BXII is introducing it's new commissioner, Stanford AD Bob Bowlsby (yes, BOWLSby), The WAC is imploding, La Tech will be dancing on it's grave, The Sun Belt is expanding, an CUSA is becoming "WACin' 2: Electric Boogaloo." This would be a true CONFERENCE EXPANDAGGEDON, if any of these teams actually mattered at all. Meanwhile the MAC is going to just keep it's head down and let this all blow over.

What would the potential new playoff system have looked like in the past? For one, LSU would have had a rematch IN 2007!

Roll Bama Roll did THE SEC AS 80'S METAL BANDS and it's mostly accurate, except for the fact that LSU is clearly Van Halen. I could explain it, but WAFB's Jaques Doucet already did that at length a few years ago.

This is about as compete a recap of Tennesse's spring as you are going to find anywhere.

All you stat heads out there will like this really cool chart of college football attendance over the last 5 years.

It's a stellar weekend in college baseball (our preview will be appearing here later this morning), with the most intriguing matchup being #11 Purdue, the biggest surprise in college baseball not named Kentucky, traveling to LA to face #14 UCLA in a series that could determine which team is a national seed. (Yes, Jim Delany, that's a B1G baseball team succeeding on the same criteria that the rest of the nation faces. You should have better faith in the teams in your own conference). Previews of the rest of the weekend, featuring some key SEC matchups, from Baseball America and Perfect Game are also worth a read.

In more baseball news; Austin Nola is on the national Shortstop of the Year watch list; Kevin Gausman, Raph Rhymes, and Nick Goody are on the Golden Spikes Player of the Year watch list; You should still be voting for Austin Nola everyday for the Senior CLASS award; I am leery of any sort of proposed meddling with college baseball by MLB and their idea about going to wood bats can get right the F out of here.

Shaq (make that Dr. O'Neal Ed. D) has a unique workout these days.

Trying to beat the already low prices on the scalpers market, LSU is offering 2 for 1 deals on the North Texas and Idaho games. Save your money and get them cheaper on the day of.

The man who caused the World's Largest Outdoor Cocktail Party to be renamed is leaving Georgia. The locals are dancing in the streets.

Lastly, a hearty congratulations to Scott Long in his first week flying solo during a time that would make lesser bloggers like myself take a well justified break.