While both teams this weekend have likely secured postseason berths, both teams are looking to make their paths to Omaha a bit easier. LSU needs a big road win to help secure a national seed, while Ole Miss (30-16; 10-11 in SEC) wants to get into the regional hosting conversation. I spoke with our SBN Blog Bros at Red Cup Rebellion (who, aside from being Ole Miss fans, are pretty decent people) about the ReBears and their chances this weekend. I also answered a few questions they had about LSU, which you can read on their site.

PodKATT: In the one outing I've seen him, starter Bobby Wahl was less than impressive against UGA, but otherwise has a nice record and a stellar 2.09 ERA. How quickly did he adjust from his role last year in the bullpen and what other arms do the Tigers need to look out for?

The Cup: Bobby Wahl has been a really pleasant surprise for all of us. He was a highly touted recruit but, as a freshman, only saw action in set up or closing roles. After this past summer's Cape Cod League season, a lot of scouts told us that he was the real deal and would win games in the SEC as a starter. We were skeptical because we saw nothing to believe he'd be a reliable Friday night guy but we'll be damned if they weren't right. Wahl has impressed in most outings (as you mentioned, the Georgia game wasn't his best) by displaying great control and better-than-average velocity on almost all of his pitches.

Mike Mayers has become a reliable Saturday guy. On Sunday, Ole Miss trots out TBD (literally, our Sunday guy is "to be determined" leading into every weekend - it's frustrating). In relief, freshman Hawtin Buchanan has great velocity, while Aaron Greenwood and Dylan Chavez have settled into set up and closing roles pretty well over the past couple of weeks, so they're guys that you should see a lot of this weekend.

PK: Alex Yarbrough has the bad luck to be hitting .417 in a season where Raph Rhymes is hitting .503, but there appears to be solid hitters up and down the Rebel line, with about half of the regulars hitting over .330 and a pair of double digit home run hitters. No team has the kind of offense of even 2 years ago, but is this a lineup that can get it's self out of jam in the late innings?

RCR: To answer your ultimate question, no. This isn't a lineup that can get itself out of jams or capitalize on opportunities. People are quick to point out that Ole Miss is second in the SEC in batting average. That's true, and nice, but the average literally drops when the chance of scoring rises. The second best average in the league drops to seventh in the league with men on base, ninth with men in scoring position, and dead last when the bases are loaded. It's bizarre, but the numbers don't lie; we're great in low pressure situations and awful in high pressure situations.

Yarbrough is the real deal though. Not only does he hit well and with some pop, but he's actually a pretty skilled second baseman. We look forward to seeing him in the major league.

PK: Statistically, both teams are quite similar. Both hitting at about the same ~.300 clip and both staff ERAs hovering at ~3.20. What about Ole Miss has you believing they'll take the series this weekend?

RCR: The home field advantage, even though it isn't pronounced as much in baseball, is a real thing at Swayze field. Ole MIss' biggest series wins - Florida and Arkansas - have been at home. Losses to Mississippi State and Georgia were on the road. This team just plays really well at Swayze field. Since these teams are as similar as you mention, this is the only thing I can really figure gives us an edge. 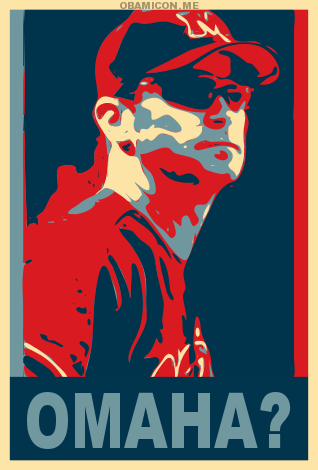 PK: There is a bit of a fatalist attitude with Ole Miss baseball, and this year's team appears poised as it always does to finally make it to Omaha. If it doesn't happen this year, at what point does (LSU alum and known traitor) Mike Bianco's seat get warm?

RCR: We actually had a good discussion about this on the Cup this past Tuesday. Fans are pretty divided as to how to answer this question. Some people feel that if this team preforms poorly in Hoover and isn't hosting a regional, then Bianco hasn't done enough to prove that he deserves to keep coaching at Ole Miss. Other people feel the guy would have to fail and fail miserably to lose his job and deserve losing it.

It's hard to answer this question with confidence because we're not really sure what our new athletics director, Ross Bjork, expects out of the baseball program. My guess is that if Ole Miss misses out on hosting a regional again this year and doesn't improve next year, then Bianco is likely fired.

PK: LSU always wins the numbers game, but I've routinely expressed my envy of the types of crowds both Mississippi St and Ole Miss draw, especially the Ole Miss student section. What should our OFs be worried about?

RCR: I haven't been to right field in years (I believe I was last there in 2009), and I've hard that the rowdiness has increased a lot, but the heckling and insults have gotten, frankly, lame. This is the student section that, in a 2005 regional, made an outfielder for Oklahoma cry because they mocked his sister. These guys print out fielder's Facebook pages and Twitter feeds and Google the hell out of them to get whatever it is they can on the guys. The most memorable stunt they pulled was a few years ago when they printed out a lifesize poster of one of Florida's outfielder's sisters, who just so happened to be a Hooters bikini model. They draped that over the wall as he was jogging out to warm up. Rumor has it that he was visibly horrified.

For this series, I'd just expect a lot of bad insults and slurred curse words. Nothing these guys haven't heard anywhere before. The crowd should be large and rowdy, but nothing outrageous. 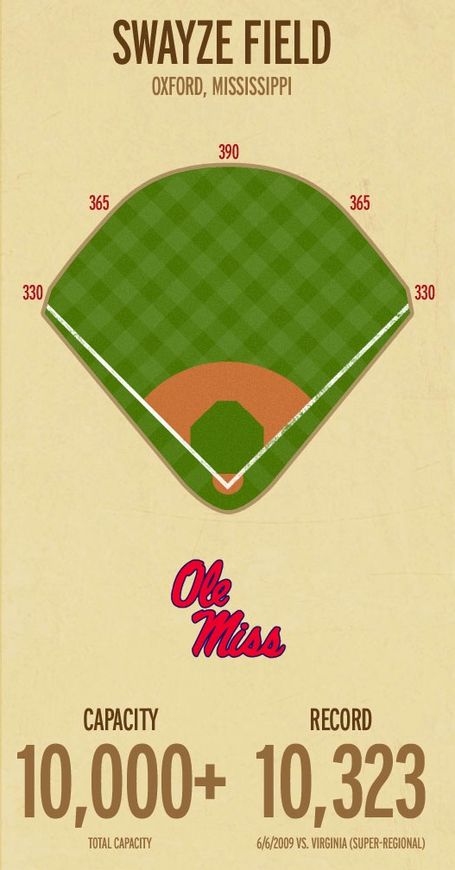 It's summer in the south this weekend. High 80's and a slight chance of thunderstorms all weekend. Only Saturday is being televised, with video for Fri and Sun only available through Ole Miss' streaming service.