In an ongoing effort to try and get us all through these final three months before football season starts, I thought it might help out to maybe suggest some good reading. As much TVas I watch, the summer is a great time to catch up on reading and to do a lot of research, etc…

It shouldn’t come as much of a shock, that I read a LOT of sports-themed books, and with this being a sports blog I’ll focus on those. First up, "Blood, Sweat And Chalk," by Sports Illustrated’s Tim Layden. 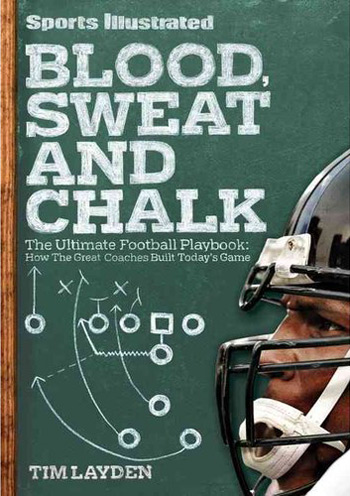 Layden is on the short list of SI writers I always pay attention to, mainly his 1996 profile of then-Tennessee quarterback Peyton Manning played a large role in the intensification of my college football fandom, and also ignited my interest in sports writing. And where would all you people be without that?

The book, published in 2010 and now in paperback, trumps itself as "the ultimate football playbook," but it reads more like a history book, breaking down and giving perspective on various offensive and defensive schemes from the wing-T to the Bill Walsh West Coast Offense to the A-11 to the Buddy Ryan 46 Defense.

And as much as Layden profiles the schematics of those gameplans, with perspective of what created them and note of their fallout and effects on the game going forward, he also pays tribute to the fraternity that is coaching. Very few of the innovators discussed claim credit for what they did, and all were incredibly open about sharing knowledge, sometimes to their own detriment.

Chapter four and five illustrate this well discussing the development and rise of option football and the Wishbone, which began in the mind of Texas Longhorn assistant Emory Bellard and came to dominate the game in the hands of Oklahoma and Alabama teams of the 1970s. The ‘Horns adopted the scheme out of desperation, but it didn't take long for then-Sooner assistant Barry Switzer to see the value in the scheme and try to adopt whatever principles he could gleam from film study. Things turned when OU head coach Chuck Fairbanks called Texas' Darrell Royal in 1970 to ask for a favor: for Bellard to oteach the entire offense to Switzer:

Bellard was stunned. As much as he had been willing to help other teams, the thought of handing over his prized weapon to the rival Sooners was too much to swallow. "Darrell, you gotta be joking," said Bellard.

Royal was the boss. Bellard backed down. Switzer called a week later and kept on calling for several months. "Anytime he had a question about what to do in a certain situation or against some defense, he would just call me right up," says Bellard. "We just gave the whole thing to ‘em"

Royal and the Longhorns would never beat the Sooners again, until his retirement in 1976. Switzer road the offense to the head job himself, winning national titles in 1974, '75 and '85 with stars like '78 Heisman winner Billy Simms, Joe Washington, Steve Davis, J.C. Watts and Jamelle Holieway.

The Wishbone story also illustrates one of Layden's other permeating themes: necessity is consistently the mother of innovation for football coaches -- but talent always wins out eventually. Almost every schematic shift or invention in the book begins as a way of coaches working to make up for a lack of talent with a new strategy -- but talent always wins out eventually. Hell, the zone-read was born out of a happy accident at Glenville State in West Virginia when quarterback Jed Drenning kept the ball on a busted shotgun handoff and ran to his right, because the defensive end closed on the back. Then-coach Rich Rodriguez simply asked Drenning why he ran that way, and the light bulb went off.

Nearly every coach in the book either saw their new attack grow legs they ran it with better players, or, in some cases, watched another coach do it. LSU's own Paul Dietzel discusses the way the wing-T began to spread throughout the south as the Tigers had their successes with the Rabb-Robinson-Cannon backfield, but Arkansas' Frank Broyles wasn't quite as lucky:

"We didn't have Billy Cannon."

Don Coryell and Bill Walsh had somewhat middling success with the St. Louis Cardinals and Cincinnati Bengals (Coryell as head coach, Walsh as coordinator), but their respective passing attacks took off with quarterbacks like Dan Fouts and Joe Montana throwing to targets like Kellen Winslow, John Jefferson, Jerry Rice and John Taylor. Likewise, Ryan's 46, which began as a way to make up for a lack of talent by disrupting offensive blocking scheme, led to one of the greatest defenses in NFL history with Mike Singletary, Otis Wilson, Richard Dent and Wilber Marshall on hand.

One of my favorite themes, simplicity, comes up again as well, such as in Don Coryell's numbering system for his "Air Coryell" route structure -- what we now know as the basic 9-route "route tree" that every NFL team uses -- where a simple number like 837 would tell the X, Y and Z receivers which route to run. Joe Lee Dunn begat the 3-3-5 stack defense simply by dropping the two ends in his 5-3-3 into coverage against faster offenses.

A final big-picture idea that the book exposes is the cyclical nature of the way the game evolves. The schemes speed up, slow down, spread the field horizontally/vertically or compress things back in. The pulling and trapping guards of the single wing begat Vince Lombardi's power sweep which begat John McKay's Student Body Right at USC, and eventually Joe Gibbs' counter-trey and Tom Osborne's I-formation option attack. Middletown, Ohio high school coach Glenn "Tiger" Ellison created the foundation of the Run-and-Shoot offense that Mouse Davis would use to make superstars out of Jim Kelly and Warren Moon, and later would lead to Rodriguez' spread-and-shred attack at West Virginia.

Defensively, the creation of the Wishbone and option offenses moved defenses out of the traditional "50," or 5-2 front into the 4-3. And Jimmy Johnson took that to the next level with the fantastic athletes he recruited to the Miami Hurricanes. As Air Coryell and Bill Walsh passing attacks began to exploit blitz-happy NFL defenses, coaches like Bill Arnsparger, Dick LeBeau and Dom Capers fashioned the zone-blitz. And as pro defenses moved more towards the smaller, faster 3-4 defense, Johnson arrived in the NFL and ran them over with a mammoth offensive line and Emmitt Smith.

Space is always the key. Can you create some for the biggest and fastest guys on your offense? Or can you create holes in the defense's blocking? Will the variants of the A-11, still developing in California high schools, be the next revolution?

All-in-all, Layden paints an engaging tapestry in about 255 pages that drops a lot of knowledge and tells a lot of stories. It's a great pickup for any football fan interested in learning more about how the sport got to where it is today, and wants to begin to understand where it might be headed in the future.