I do not like Tyrann Mathieu. There, I said it.

I find him hard to root for. That doesn't stop me from rooting for him; I just find it hard to do.

I won't make the mistake of telling anyone how to feel. But for me, I just don't like him. Beside the fact that he's a brilliant football player, why would I?

Just read his twitter account. He tweets, incessantly, an attribute I find annoying in and of itself. When you consider the content of his tweets, it becomes all the more difficult to swallow. It's somehow a mixture of arrogance, humility, trash-talking, paranoia, shout outs, call outs, advice, re-tweets of people singing his praises and motivational speeches. Here's a sampling: 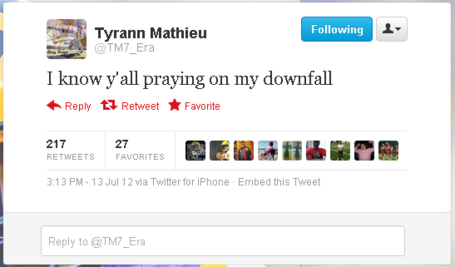 I don't know who y'all is, or why Mathieu thinks they are praying for his demise. 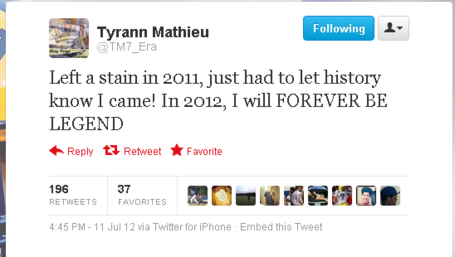 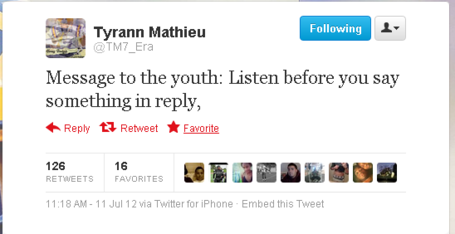 Finally, some wisdom, that he fails to yield himself, often.

This doesn't even touch on him trash talking McElroy and Alabama a few months ago.

I know it's just a twitter account. I get that it's all fun and games. But am I the only one surprised that Les Miles hasn't put a moratorium on him yet? That has seemingly happened with Russell Shepard (which may well be a personal decision), who hasn't tweeted since May 4th. Am I the only one who finds Mathieu's twitter account a wee-bit embarrassing? This coming from a guy whose own Twitter is an exercise in stupidity.

Even forgiving his twitter, let's talk about his style of play. He loves to talk. Talk, talk, talk, talk, talk. Get run over, talk. Make a pick, talk. Score a TD, walk to the sideline and pose for the cameras. Cause a turnover, talk, pose, talk, treadmill, talk, talk.

I get the gamesmanship. I don't mind a little psychological warfare. I do think he is effective when he talks. I do think his "swagger" is part of what makes him a great player. But that doesn't mean I have to like it, does it?

Sometimes his "swagger" goes too far. Like when he stupidly cost us about a quarter of a football field of yardage with a dumb-dumb holding penalty, which was really just him getting lost in the trash-talk.

Look, the kid works hard. Don't worry, just read his twitter; he reminds you of that fact. Every. Single. Day.

I'm not old school, and I don' t believe in the mythology of "doing it the right way." I'm not against athletes with twitter. I'm simply talking about Tyrann Mathieu as if he were someone I knew. Because if he were, I would hate him. I would make fun of him. I would mock him. In fact, even if I didn't know him and he played for Alabama, or Florida, or Georgia, or Texas or hell, Vanderbilt, I would openly deride him and probably come here and write this column, only much more derisively. Because then, it's somehow accepted.

When a player from another team acts like a dweeb, we are allowed, in fact encouraged, to berate, mock and otherwise insult them. When our guys do it, we are somehow supposed to rally behind and be empathetic.

Do I love it when Tyrann Mathieu comes up with the most improbable of turnovers? Hell yes I do. Do I hope Tyrann Mathieu plays the finest football of his career in this upcoming season? Absolutely. Mathieu is, without a doubt, one of the most prolific turnover artists in college football history. He's one of the finest defensive backs to play now or any era. He's a unique tour-de-force on the football field. And somehow, I can't stand him.

As fans, we are naturally pre-disposed to liking any and everyone who dons our teams' colors. We will root for the bad (Jarrett Lee, Jordan Jefferson, Josh Booty) and rush to defend the stupid (Cecil Collins, Ryan Perrilloux). Passion overrides reason, which is frankly one of the best things about being a fan. I'm just as guilty as the next man.

I'll root for Tyrann Mathieu. But that doesn't mean I have to like him.