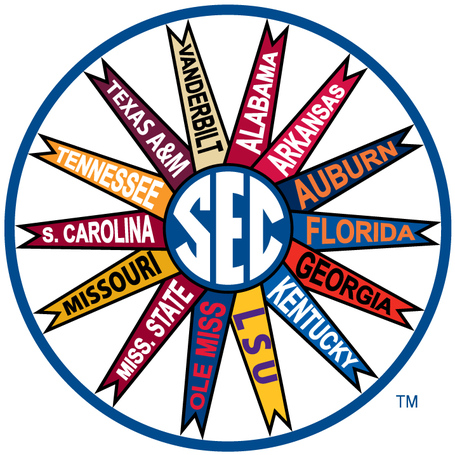 It's a new day in the SEC as our new friends to the west have officially joined the conference as of yesterday. The folks from Mizzou are glad to be home after wandering for years in the BXII desert. Meanwhile, the Aggies celebrated by dressing up the campus. Both schools are also participating in those finest of SEC traditions: stealing SCar's AD and planning massive facilities upgrades.

It was realignment weekend for a few other teams around the nation as well. TCU and WVU transfered to the BXII without incident, but Boise St nearly got cold feet for it's move to the Big East, waiting until the final hours to send it's official notice to the MWC members.

Roll Bama Roll notes one of the statistical oddities of the Mizzou addition: For the first time in 40 years, there is a team that has a winning record against Bama.

Dawg Sports notes that the additions will likely continue to move around the traditional weekends for certain games(like the UGA-SCar game, which has already been moved away from the opening weekend of SEC play)

There were as many as 6 people who got onto the field in Omaha during the final game of the CWS. SB Nation Field storming expert Jon Bois has analyzed the madness.

Baseball America's annual post CWS 8 for Omaha features 3 SEC teams, including 2 from the West, but none of them LSU. For what it's worth, LSU placed as high as #9 in some of the final season polls. Mason Katz will be heading to Omaha for the College Home Run Derby. Closer Nick Goody, who signed with the Yankees shortly after the end of the season, has been so impressive that he's already moved up a class in the minors. Goody's new owner? Bill Murray.

LSU has put together a page that tracks all of the current, former, and future Tigers who are competing in the Olympics this summer for various countries and is continually updating it with who has passed their national qualifying rounds and where their competitions can be seen. Should be a good bookmark for the summer ahead.

LSU will also be sending players to represent the US in another international competition. (Do yourself a favor and just don't click that link)

When the SEC Beachfest was announced with a roster of Pat Dye, Gene Stallings, Vince Dooley, and Phillip Fulmer I thought it was interesting but kinda pointless for LSU fans (though I'll admit there are worse places to be in late August than Gulf Shores). But now that we know Les Miles, along with Nick Saban and Gene Chizik, will also be in attendance, it sounds like one helluva weekend.

The next SEC Storied documentary will be about....the 2008 SEC basketball tournament that took place in the middle of a tornado.

Details about the new playoff system are starting to emerge and they include plans to turn New Year's Eve and Day into the greatest CFB days of the year.

Looking far ahead, Billy talked to some bookies about setting the early line on this year's LSU-Bama game.

Only one team in the country had a player drafted in the 1st round in all 3 major professional drafts this year. It's the one who loves billboards. In other cowbell news, State had to cancel their 2013 season opener against Miss. Valley St. due to an odd NCAA requirement that would have made the game not count towards bowl eligibility.

It's kinda sad when we have to look to the Sun Belt for innovation in the field of replay technology.

More great interviews are popping this summer from legends of the game, last week we heard from Keith Jackson and Hal Mumme.

The New Orleans Hornets have secured a new TV deal with Fox Sports that, among other things, will lead to the creation of a new station: Fox Sports New Orleans. For LSU fans this has the double effect of adding a new local sports station to potentially pick up games and coaches shows and frees up time on Cox Sports to pick up more LSU spring sports like baseball and softball.

While Tulane's fight for a new stadium continues, Gambit New Orleanslooks back at old Tulane Stadium and the days when Uptown residents had to deal with a 70,000 seat stadium in their backyard.

I'm not sure how many of our readers will be interested, but this Baton Rouge Business Report story on how the reduction of the Times-Picayune will affect the Baton Rouge Advocate (which is by default now the largest paper remaining in the state) to be very interesting. There's a very surprising tidbit were The Advocate's lead editor estimates the paper's current daily circulation in New Orleans to be just about 100.

Broussard and Scott are fighting about which should be called the Boudin Capital of the World (My money is on Scott, and not just because I have an intense dislike for the "city" of Broussard)

SB NATION USERS NOTE: You can now turn off commenter signature lines, if you so choose.