We prepare to cross the halfway point of the summer, and football season just might be on the horizon ahead. It could be a mirage I suppose. But delusional optimism and all that, right?

Anyways, a popular topic in education lately has been summer retention, i.e., what knowledge and skills kids lose during their summer breaks. On that note, I thought it would be a good idea to create something of a catch-up/preview study guide for some of our X & O breakdown pieces, in order to prime you for the start of the season, along with a review of the must-have book of the summer for any hardcore football fan, "The Essential Smart Football," by the interwebz most imminent football strategy blogger, Chris Brown. 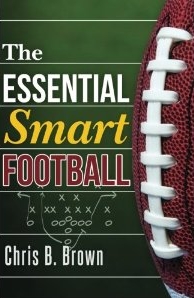 Brown, of course, runs the wonderful Smart Football blog, a source that I've cited more times than I can count in various pieces on both LSU and various opponents they've seen in the last few seasons. He's the best on the web at breaking football strategies that, at times, can seem very complex, to their most simple elements in a way that doesn't overly rely on jargon. So you won't need Ron Jaworski or Jon Gruden on hand to translate for you. So what I'm saying, is that THIS GUY knows how to write about football.

And the book is just that -- just 154 pages of Brown's top posts from the blog, expanded. Many that I've linked to in the past, such as a history lesson on Urban Meyer's hybrid spread-option offense, from its pro-style roots under Scott Linehan, or how Gus Malzahn incorporated old single-wing plays into his hurry up offense to better utilize Cam Newton in 2010. There's a chapter on the constraint theory of offense, a review of Mike Leach's "Swing Your Sword," that turns into a breakdown of his "four verticals" concept, and even some defensive analysis focused on Alabama and the New England Patriots.

It's a quick and easy read, again, perfect for a beach setting for those of you that still have some Redneck Riviera trips planned. It's available on Amazon, and for the Kindle.

For those of you that do most of your reading from the computer, here's a list of some pieces that will also prime you for September 1.

Back in April, I discussed "concept passing," or the style of passing offense that Steve Kragthorpe favors. Parts One and Two break down five versions that LSU runs with some explanations of reads, progressions and what is expected from a quarterback.

Over at SB Nation's Clemson site, Shakin the Southland, Dr.B and his mates have been posting excellent breakdowns of the game from a number of angles, including line play, the passing game, running game and defense:

Notes on some of LSU's 2012 opponents, courtesy of various outlets: