How deep was the 2011 LSU defensive line? Even with the loss of two starters, the Tigers can still boast eight returnees out of the 10 players that saw the most significant snaps last season.

Michael Brockers exploded into a first-round draft choice, and while losing him takes away a tree-trunk-sized plank from that defensive wall, the remainders have continued to bolster themselves. Backups have added some weight to prepare for larger roles (no pun intended), including a couple of redshirt players. Most importantly, the line returns its best player (Sam Montgomery), and its most important leader (Bennie Logan - who will don the No. 18 jersey this year), plus a pair of budding superstars that could be ready for the all-league, or maybe even All-American stage.

Sonic Sam is the headliner. All-conference, All-American and already projecting as a top-10 draft pick. And oh, he put on an extra 10 or 15 pounds of muscle this season. I expect him to push for double-digit sacks this season, and challenge Chuck Wiley's single-season school record. From my SB Nation All-American report:

His first step can get him by most offensive linemen (he even had two sacks matched up on Alabama's Barrett Jones last November), but if that's not enough he has fantastic technique and hustle that has also made him an excellent run defender. And his 2012 can be even better -- he's continued to add muscle (up to 260 pounds, reportedly), and might even gain a little more explosion another year removed from the knee injury.

Montgomery and Barkevious Mingo should be college football's top end combination this season. Our Steampunk Emperor took a major step forward in 2011, showing instinctual and technical improvements that made him a more complete defensive end (he actually finished with more TFLs vs. the run than Montgomery). Mingo came to LSU a remarkably fast and athletic, if undersized, player, who lined up at defensive end because he didn't really know the game well enough to be a linebacker. Year one, he was a pass-rushing whirling dervish from the edge, but often ran his way out of plays as often as he ran his way into them. After a much more well-rounded and under-control year two, scouts are projecting him as a potential first-rounder and he could be in for some very, VERY, big things as a full-time starter. It would be nice to see him pack on a little bit of weight, but there's been some talk that keeping on weight will always be an issue for this guy (#goodproblems?). The lack of bulk is something he managed very well a year ago, so another year of improvement could render it even more of a moot point.

Lavar Edwards and Jermauria Rasco should round out the principle end rotation. The former would start for a number of SEC teams, with a real good mix of size and athleticism that might still land him in the 2013 NFL Draft. Rasco proved too good to keep off the field as a true freshman, and made a couple of big plays late in SEC play. His development as a reserve will be crucial this year, as he'll be looked to start next season.

Behind those two, Chauncey Aghayere, Jordan Allen and Justin Maclin provide some experienced, if undersized, depth, but all three might be watching true frosh Danielle Hunter jump them on the depth chart. 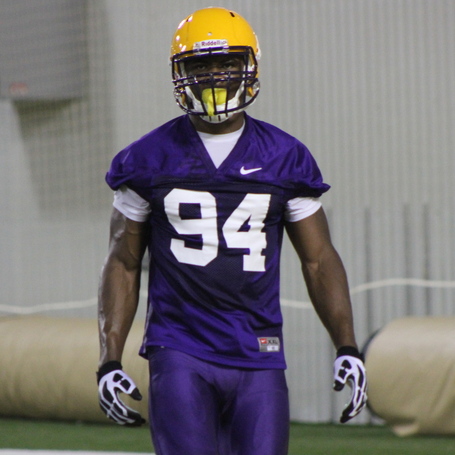 What did you say about a girl's name?

The returning Logan will take the lead here after playing at a very high level in 2011 next to Brockers. He may very well be the most underrated defensive lineman in the country, given how many preseason outfits left him off of their All-SEC lists. Now, a good 10 pounds heavier, Logan appears ready to step into the pantheon of stereotypical LSU defensive tackles, with players like Drake Nevis, Glenn Dorsey and Kyle Williams: short, quick, remarkably strong and annoying as hell to block.

His padnah in the middle will be budding superstar Anthony "the Freak" Johnson. After a freshman All-American year characterized by the type of strength and explosiveness that drew nearly as many double-teams as Brockers, how did Johnson spend his offseason?

"I've lost about 20 pounds, down to 305," he said. "I'm trying to get to a good weight so I can carry my weight well. It feels a lot better. I'm light on my feet and I can use my hands a lot better and get to my technique.

I was too heavy. Coming out of high school, I was a light guy, 289-295. I got here and gained 30 pounds and felt like I wasn't the same. I was trying to play big, but I learned in the SEC it isn't all about weight. It slows you down a bit."

Johnson will compete with Eric Reid to be the next breakout star for John Chavis' defense.

Behind those two, the depth is a little bit thinner in terms of experience, but not in the size department. J.R. "Ego" Ferguson appears to have found his grove this offseason, bulking up to the 300-plus range and pushing his way into the No. 3 spot in the rotation. He'll be joined by senior Josh Downs, he of the undersized-but-hyperactive demeanor that has made him a couple of plays in three years, but also kept him on the shelf with a lot of injuries. Redshirt frosh Quentin Thomas will be the next guy in, a raw prospect that played d-end in high school but has worked his way into the 290-pound range and drawn some good reviews so far. Mickey Johnson is next on the list, an undersized fireplug type with big-time weightlifting numbers. Four to five guys can make for a deep enough rotation here, but an injury or two and newbies like Thomas and Johnson are suddenly pressed into a lot of snaps, and I'd feel much better about that happening naturally.

Overall, whether this unit has the depth of last year's crew will depend on players like Thomas, Hunter, Johnson, Maclin and Allen. If two of those guys can emerge as consistent contributors, the 2012 defensive line just might be the same exhaustive zombie hoard LSU had at its disposal in '11.