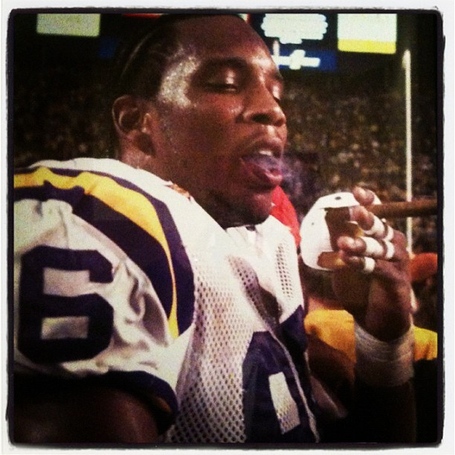 There is a significant update in the Tyrann Mathieu saga. First, the Times Pic is reporting that two of his teammates, speaking anonymously, claim that Mathieu will be returning to LSU and enrolling for this current fall semester. Shortly afterward, Matheiu's father told WVUE that that is indeed the plan as long as John Lucas, the former NBA player who runs the rehab center, approves of it. Presumably, Mathieu will be spending the year away from the team with hopes to rejoin next season. There is also the curious case of Mathieu still appearing on class rolls at LSU.

I am of two minds about this. On the one hand, I think it would be great to get Mathieu back next year. On the other, is 16 days really all it takes to go through a drug rehab program? And is coming right back to LSU, even if only to take classes, really the best decision?

Things have quieted down as the team prepares to shift into game week, but there will be significant news today, one way or another, as we will find out if Mo Isom has earned a spot on the roster.

We have sad news to report this morning as the Eagles have announced the death of Steve Van Buren. Originally born in Honduras, Van Buren was raised in New Orleans and played for LSU from 1940-1943, spending most of his career as a blocking back in the single wing until head coach Bernie Moore shifted him to Tailback. In his senior year he finished 2nd nationally in yards and led the SEC in scoring with 98 points. Van Buren would be drafted 5th overall by the Eagles and go on to have a decorated career as one of that NFL's greatest ever running backs. Van Buren was elected to the NFL Hall of Fame in 1965 and is one of only 3 Tigers in that group (Jimmy Taylor, Y.A. Tittle.) The Times Picayune ran a great profile of Van Buren almost exactly a year ago that's a great read. Van Buren was 91.

If you haven't heard already, Mother Nature is preparing to make her presence known next week. The start of college football at LSU should be fine, barring any drastic changes, but it's best to keep an eye on it.

Even more additions are coming to Tiger Stadium than we thought.

The Daily Reveille caught up with the pair for freshmen swimmers who spent the summer in American flag body suits at the olympics.

As expected, the Southland Conference officially accepted UNO into their conference yesterday, where they will compete as a full member next fall. UNO's AD is understandably excited to be returning to D-1 and there was even breif discussion of UNO's plan to field a D-1AA Football program in 5-6 years. Which means Tulane wont even be the best college football team in New Orleans in 7-8 years.

How unthoughtful of me to forget to mention earlier this week the arrest of Greenie Trent Mackey. A senior LB and the CUSA Preseason Defensive Player of the Year and the closest thing Tulane had to a star player, Mackey was arrested for armed robbery of a home just south of Tulane's campus. This should give the greenies a late push in the Fulmer Cup standings that may see them finish in the top 20.

From the folks at War Eagle Reader, a rare field level shot of the inferno that took place out back at Auburn in 1996

Mississippi St.'s WR coach suddenly resigned this week and all signs point to the cause being an NCAA investigation.

TeamSpeedKills has a list of all the things that an incoming freshman knows about college football. It is designed to make you feel old.

In addition to the usual LSU Replays, Cox Sports is also picking up the UK-Kent State game in the evening of Week 2

The lawsuit pitting players against the NCAA over the use of their likenesses has hit an odd stage as a seemingly desperate NCAA is now trying to acquire evidence against their long time enemy Sonny Vaccaro.

Idaho's struggle to stay in D1-A is starting to wear on Vandal head coach Rob Akey.