Share All sharing options for: Monday Press Lunch: Week 1 v. North Texas - Miles Does Not Care For Your Striped Shirt

EDIT: this will normally run every Monday afternoon, but things are a bit crazy this week.

Here we go...Hawthorne describing the lunch menu at Carrabbas continues to be an adventure...the depth chart (after the break) has a few surprises, namely Wright, OBD, and Landry getting the WR starts over Shepard, and the Soph Collins getting the start at LT over 6th year SR Dworaczyk...There are about 500 tickets remaining for this weekend's game...Les gets started at the 18:55 mark...Opening statement a bit of the usual Les, including fears about rogue crane operators and a mention of the other Australian punter on the roster...Talks up North Texas' air game and the quality of coach that is (he was at Iowa St when Miles was at Okie St)...Les is used to dealing with hurricanes and North Texas by now...LB Tahj Jones and RB Michael Ford are currently facing "academic issues" that may hold them out of the opener, Miles could not elaborate...Muncie will get the start if Jones can't go...When discussing the QB depth chart, Miles mentions that PSU transfer Bolden could see some playing time this weekend...Kragthorpe is moving from the booth to the field for this season...Miles says the FR Jalens (Mills and Collins) have both earned their spots in the 2nd CB role and he expects them both to play a lot this season...Kragthorpe's condition is "middle aged" and doing well given the rigors of his job (btw, looks like Ted Castillio is back for another season)...Barkevious Mingo Is Miles's most improved player from last season...Starting OTs Faulk and Hurst are very healthy and have been taking full reps in practice...Miles is in love with the new lighting system, it "adds to the stature of a grand place"...Redshirting philosophy is all about putting the best team on the field right now...LBs Kwon Alexander and Deion Jones have taken to coaching very well, which is why they are on the coverage teams...You win a starting position in games, not practice, but being listed as a starter doesn't carry a lot of weight with the way Miles coaches games...Johnny Jones has tough the coaching staff how to beat the press, but not North Texas...Miles says his philosophy will always change depending on personnel and his ideal is balanced playcalling...

Week 1 Depth Chart and player interviews posted after the break 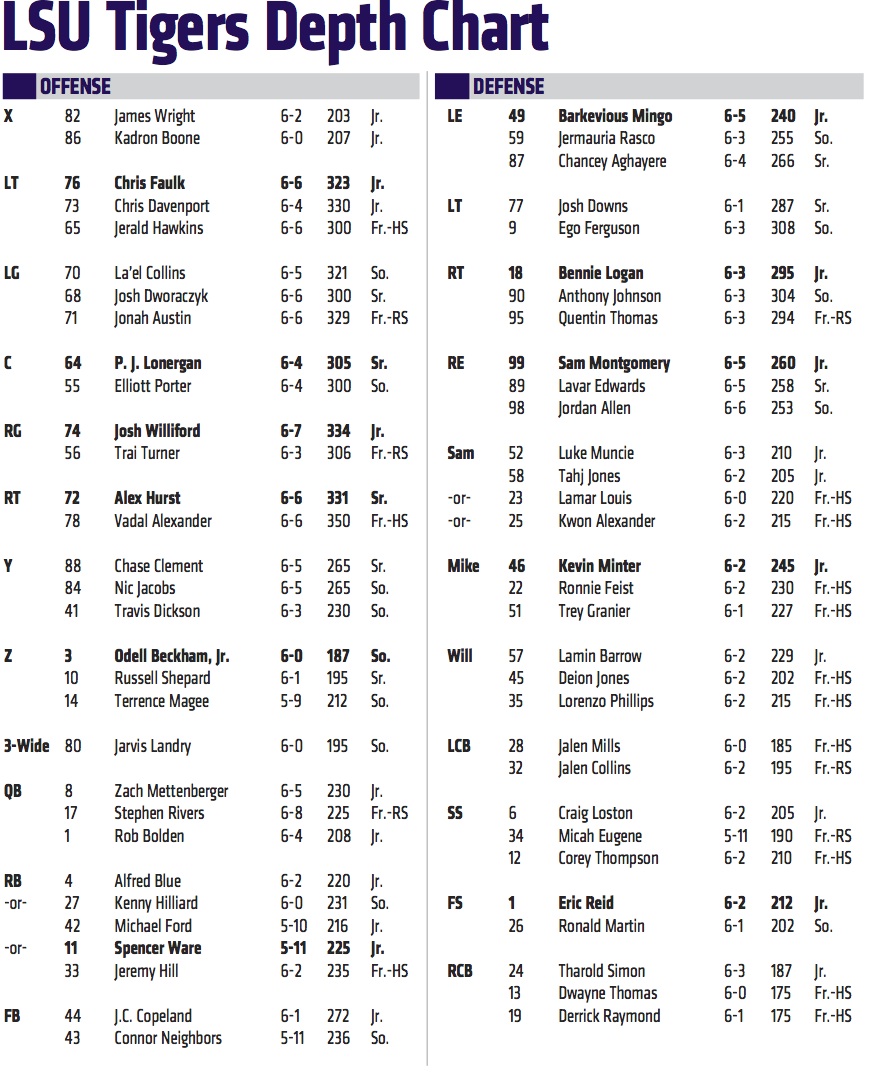 Names in BOLD are returning starters