Change is inevitable, and for the first time since 2009, it seems to be coming for LSU's secondary. Two new starters plus a host of fairly untested contributors, including a new defensive back coach in Corey Raymond.

Am I worried? Not really. There's still size and speed, a potential All-American safety ready for his breakout season plus...you know, a returning Heisman-Trophy finalist and Bednarik Award winner.

This season marks the first time in at least two years that you can't call the defensive backfield the deepest position on this LSU football team. And that's not to say that there aren't a lot of talented players with some good experience around -- but when your fourth corner is good enough to be a third-round draft choice, as was the case last season, you're due to come back to the pack a little bit. Losing David Jenkins and Ronnie Vinson cost LSU a little extra experience, but neither were expected to see the field much besides the occasional sub in dime situations. But that also means there won't be many redshirts for the DB class of '12 recruits.

We'll start "on the back end" as our coach likes to say, with Eric Reid, who just might be the total package as a safety. The prototype build, playmaking instincts, with good ball skills and a well-documented zest for the big hit. He's a leader, an excellent student and might very well be the next first-round draft choice out of this secondary. At the very least, Reid should be in for an All-SEC season and will be one of the faces of this team. 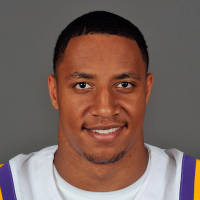 The strong safety gig (and to be honest strong and free safety are somewhat interchangeable in this defense) will likely be split between Craig Loston and Ronald Martin. It's something of a make-or-break year for Poppa, who really hasn't lived up to his five-star billing in four years, mostly due to injury. Part of the reason I'd list him as a co-starter here is because he's likely one more concussion away from permanent sidelining. Loston has always been willing to put his body out there, both on defense and special teams. But his aggressiveness has cost him at times, and is part of what's kept him off the field. Martin was a much less-heralded recruit, but came on strong last season to get some playing time late, and was impressive in the spring. He was the classic big fish/small pond recruit that did everything at White Castle High School, quarterbacking both the football team and the basketball team, which he led to a 1A state title as a point guard. His redzone interception of Zach Mettenberger in the LSU Spring Game was a heck of a play -- and every secondary could use another ballhawk.

Behind them, redshirt frosh Micah Eugene will be the next guy in and probably replace Ron Brooks in the corner/safety/dimeback position for the Mustang package. He's a squatty, well-built player that saw time at running back, safety and linebacker in high school. Hopefully, that means he'll be able to match Brooks' physicality.

He's a completely unique player. An undersized corner that plays like a linebacker, with a true gift for physicality and attacking the line of scrimmage. His development has made John Chavis' mustang defensive package one of the most feared in all of college football. Indeed, the Chief has more or less changed his defense to fit Mathieu, incorporating far more nickel looks in order to put the Honey Badger (TM7, T-Rex, whatever nickname you want to use) in the slot where he can create the most havoc. He even filled in at safety late in the season when Reid missed a game. And yet, somehow an absurd meme has developed this offseason: that Mathieu is not actually a "good" cornerback. ESPN the Magazine, in fact, referred to him as "lousy cover man."

I wonder how many cornerbacks would love to go an entire season without giving up a single touchdown pass, and then be referred to as "lousy." Because Mathieu didn't give up one in 2011. Sure, he isn't Morris Claiborne or Patrick Peterson. He gave up a couple of plays in the BCS title game -- mostly because A.J. McCarron made some of the best throws he'll probably ever make in his life. He even got beat by Da'Rick Rogers on two pass plays in the Tennessee game. He's 5-9, so sure, sometimes a taller receiver might be able to get over him for a ball. But this means he's "bad" in coverage? Think about that, and weigh his body of work. The answer, simply, is no.

Hack statisticians like K.C. Joyner* point to things like yards-per-completion allowed, a stat that is about as valuable as baseball batting average minus the context of the lineup. It doesn't account for the reality of LSU's defensive scheme, which left Mathieu in one-on-one coverage situations on maybe a third of its snaps in 2011, if not less, and often dropped him into intermediate or deep zones, when he wasn't blitzing from the edge. In passing situations, Mathieu spent most of his snaps either blitzing or dropping into a zone. And in third-and-long situations, that zone was generally deep with the idea being a short completion that doesn't pick up the first isn't really a big deal.

*Ed. Note: I find statistics, especially advanced ones to be an invaluable tool. There are a number of fantastic writers -- Bill Connelly, the Football Outsiders, etc... -- that employ them on the interwebz. Joyner is not one of them.

This isn't to say Mathieu couldn't stand to improve as a cover guy. He certainly could, much like Claiborne needed some between his 2010 and 2011 seasons. Observing this doesn't make you some sort of clever college football hipster-contrarian that "thinks outside the box." It makes you a lazy analyst that only remembered a handful of negative plays in a season that brought Mathieu to New York City as a Heisman Trophy finalist. It's the football equivalent of looking at David and deciding that Michelangelo was a shitty painter because he was such a great sculptor. It's true that he's much more valuable in his role as a general defensive shit-stirrer that blitzes and changes the game with turnovers and big plays on special teams -- and he's going to do those things again in 2012. But that doesn't mean he sucks in coverage. I've watched a lot of sucky cornerbacks in my life: Erin Damond, Demetrius Hookfin, Alex Molden or even Tyrone Drakeford. Those guys sucked in coverage. Tyrann Mathieu does not. I get that scrutiny comes with the spotlight -- and Mathieu has certainly earned some scrutiny (thinking before a tweet is something every college kid could learn to do), just like he's earned that spotlight. But that doesn't mean he has to change who he is, or how he plays. If he does what he does, and continues to improve the way he did from his freshman to sophomore years, Honey Badger gonna take home Thorpe Award No. 3 for DBU.

His partner on the other edge will be junior Tharold Simon, who broke through in 2011 as the reserve corner that allowed Mathieu to move into his customary slot position. Now, he'll be expected to handle that job on an every-down basis, and so far, he looks more than ready. Simon could push Reid for that whole "next first-round draft choice" gig -- he has the kind of size that makes an NFL scout drool, with speed and long arms that really help him keep up with receivers and get his hands on the ball. He was money defending the long ball in 2011, and with some slightly better hands could've easily had three or four more interceptions. A fact Simon seems to be keenly aware of.

Redshirt freshman Jalen Collins will step into Simon's old spot as the third corner -- and that just might make him the linchpin of the defense. If Collins can't handle that job, that means Mathieu will be spending more time outside and less time in the slot. And just because I can appreciate Mathieu's value in coverage, doesn't mean I don't want him coming off the edge, especially as a run defender. Like I said, he still has too much value there. Collins has size and athleticism, and was supposedly a favorite of previous DB coach Ron Cooper. And if there's a coach that has earned his accolades as a talent evaluator in recent years, it would be LSU's former DB coach.

After Collins, you have the true freshmen corner class of Dwayne Thomas, Jalen Mills and Derrick Raymond. And you can expect at least one, and possibly all, to see the field. Thomas and Mills have received some early accolades through week one of the spring, and both have the size to work into the sub-packages and find a spot on special teams. Raymond was the fastest high school football player in the state of Louisiana last year, but has all of one real season of playing time. He moved around several times in high school, which kept him in that limbo state of having to sit out in new school districts until his senior year at East Jefferson High School. His general rawness as a player could keep him behind the pack, but this is a kid that managed to earn multiple scholarship offers over what he showed in spring practice with no game tape for any coach to look at, so he's clearly got some skills. And of course, speed always finds its way on to the field in this league.