Thoughts From The South Endzone: That's More Like It 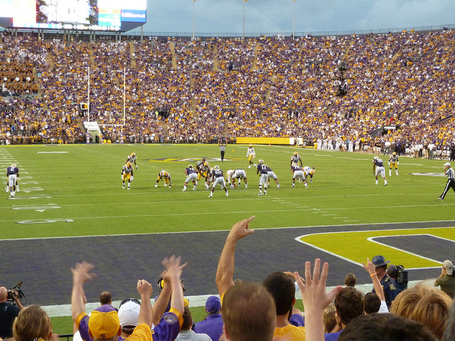 As always, photos in this post were taken by me and you can see the full gallery HERE.

To misquote an old joke "Dey 'sposed to be Pac-12." We went into this thinking Washington would put up a true challenge. Their gifted passing QB would throw against a secondary that had yet to be honestly tested. Our passing game that was still getting it's sea-legs behind our amazing backs would try to become more of a weapon wil a complete game from Mettenberger. What we got was a blowout that, save for a few small mistakes, would have been on a epic scale. And on a night where the P-12 did so well, it's got us feeling like world beaters again. 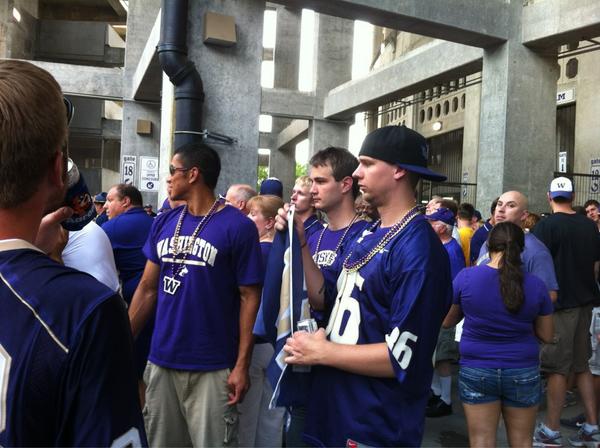 The U-Dub fans traveled very well, given they came from the other side of the country. I'd say low to mid level SEC travel. They were all just so happy to be here. In the course of a day's tailgate and game, it's common to run into one or two undesirables, but the Husky fans were always friendly and gracious. I would like to have them back one day. 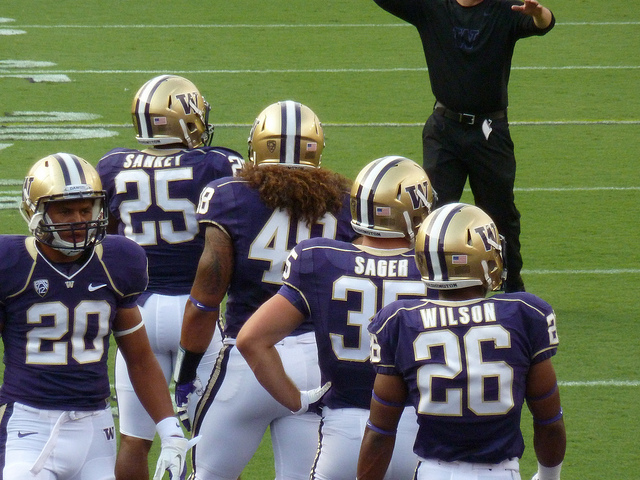 I want every one to take a good look at this and remember it every time someone thinks our uniform needs changing. Don't get me wrong, it's not a bad uni, but the unnecessary gold trim on the numbers and piping all over the jersey just don't sit well with me. The gold helmets looked spectacular in person, but I'll cut Nike if they ever try that nonsense with us again. 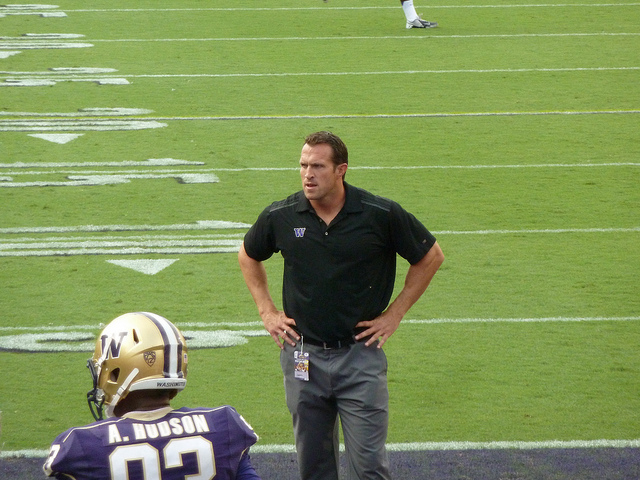 I don't know who this guy is, but he enjoys shouting and 5-hour energy a bit too much. I thought he was going to pop a vein in his neck during pregame warmups. 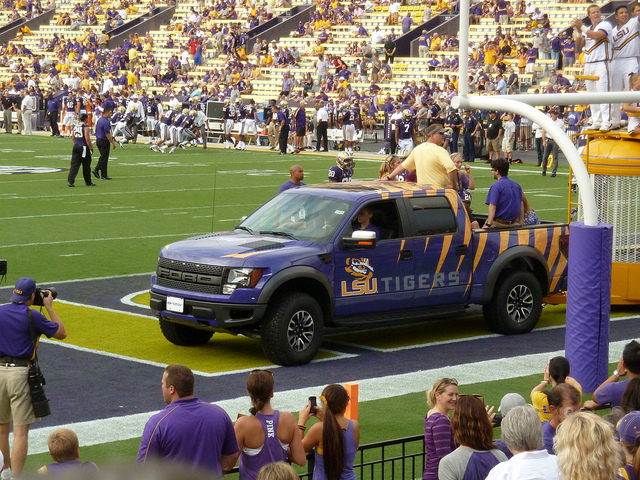 Mike was back in the building for the first time this year, and he's got a new ride. Out with the old white Chevy's and in with a Ford (an F-150 Raptor by the looks of that body kit.) The graphics wrap is very over the top. I expect to see this at a tailgate very soon. 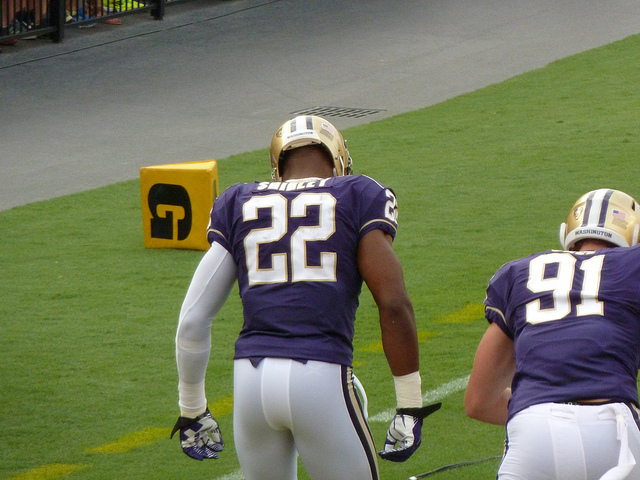 Mike's return to the field was not without incident. As he is driven around the field, the truck sometimes has to drive through where opposing players are warming up. In the many years I have sat in the South Endzone there has never been any problems from the opposition, partly because it's a truck with a tiger in it and partially because of the state troopers who flank it. But THIS GUY RIGHT HERE, DE #22 JOSH SHIRLEY, HAD TO GO PROVE WHAT KIND OF A MAN HE WAS AND DECIDED TO HIT MIKE'S CAGE WHILE RUNNING PAST IT IN DRILLS. YEAH YOU'RE A REAL TOUGH GUY SHIRLEY, SO TOUGH THAT YOUR D GAVE UP 437 YARDS INCLUDING 242 ON THE GROUND. AND APPARENTLY THIS WHOLE "HITTING THINGS YOU'RE NOT SUPPOSED TO" IS A BIG PROBLEM FOR YOU, WHAT WITH THE ROUGHING THE PASSER PENALTY YOU HAD IN LSU'S 3RD DRIVE ON A THIRD AND EIGHT. I BET YOUR COACHES ARE REAL PROUD OF WHAT A TOUGH DUDE YOU ARE! 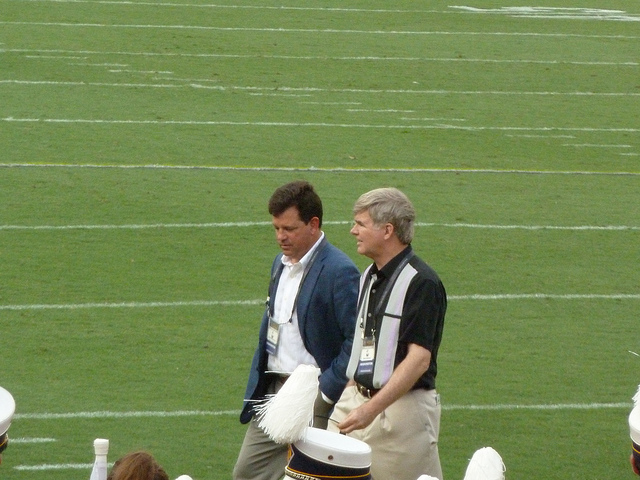 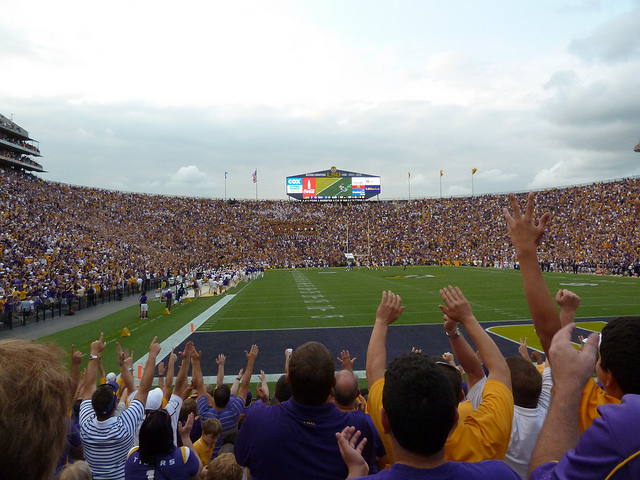 Ya know it's weird. Between all of the ODB drops/fumble, a few drive killing penalties, and settling for 2 field goals in the 2nd had me and a few neighbors had some genuine concern about how this game was going while in the break after the band's halftime show. Sure, UW's D had been out there for a loooong time and looked tired long before the half, but it just didn't feel that dominating. Then we got halftime stats that showed LSU had held them to 70 yards of total offense, including negative rushing yards. It was at that moment that we realized that LSU was doing much better than they looked. The third quater play (including Kadron Boone's TD right in front of us) had us believing again. 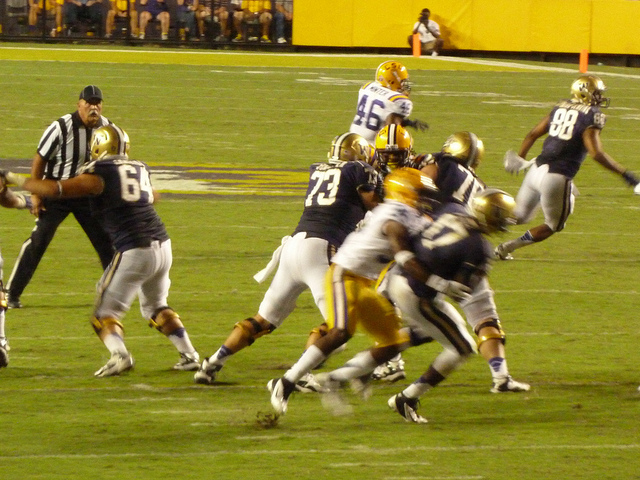 This D is so fast in person. That blur is Micah Eugene getting to Price early in the 3rd. I'm going to need a better camera. 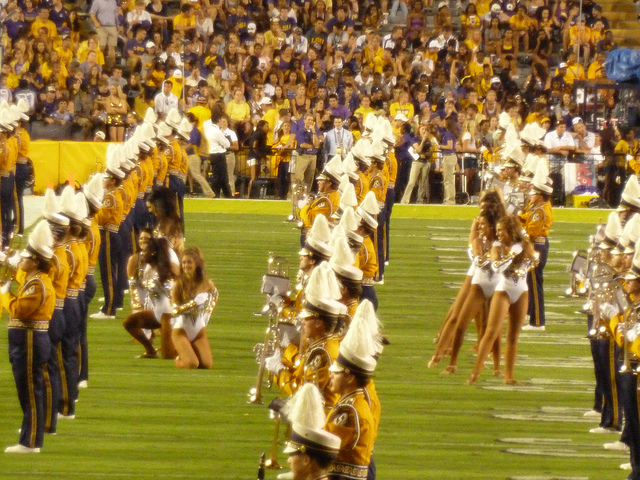 An uncommon broadway number that sounded great. Could have done without the less-than-straight lines all over the place. The piped in music felt reigned in a bit, which is good. 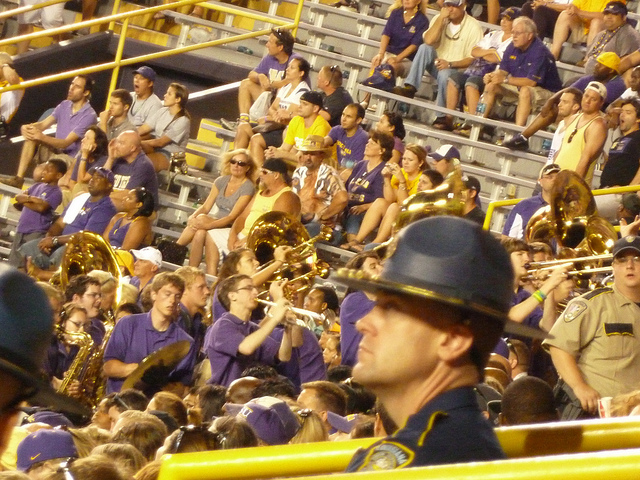 They were well miced on TV in a replay I watched, but I heard from the Husky Band maybe twice the whole game despite sitting just a few sections over. Towards the end of the game, they turned around and played to their fans, which I thought was a nice touch for the folks who had traveled so far to be there. 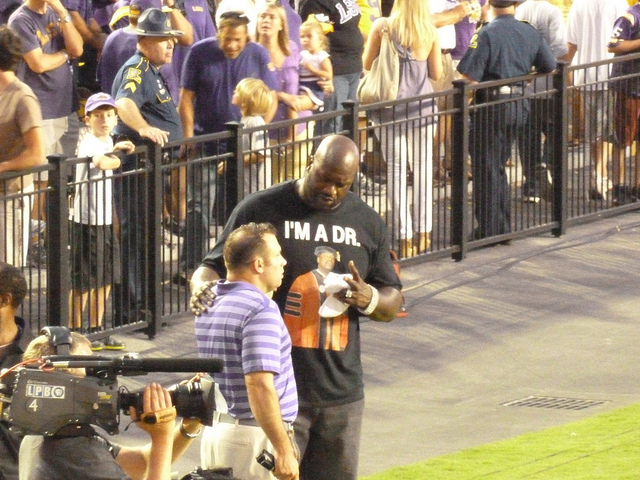 No Sunset this week, cloud cover was too thick. Instead here's Mike showing off perfect "Les MIles Clap" form 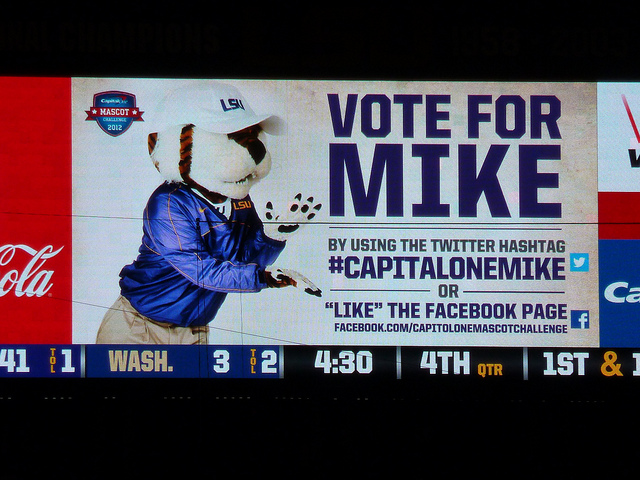 I know some of you asked for exterior Tiger Stadium photos. I'll try again next week