One of the real struggles of being a blogger is having lots of ideas and never enough time to write all of them. I've been a planning a 40 year review of Title IX for about six months, and I just never get around to it because of work, family, life, and other stuff. But the one thing I really wish we spent more time on here is our own quarterback metric, ATVSQBPI.

That's what it is so gratifying to have such an awesome community here. ORtigerfan also wanted to see us use ATVSQBPI more, so he made the spreadsheets, crunched the numbers, and sent me the results. Which is super awesome, and I am totally going to take advantage of him over the course of the year so we can track our QB rating as the season goes on. However, what good is free labor if you can't make him do more than he signed up for?

Which is why we've taken the time to play with the formula and, hopefully, come up with a better model. Also, it's a good chance to review what is ATVSQBPI and why Pittman created it in the first place.

ATVSQBPI exists because the traditional passer rating absolutely sucks. Let's say QB1 has a passer rating of 100. Is that good? What does it mean? Chances are pretty good you don't know because it doesn't mean anything. The scale is fairly random.

Believe it or not, passer rating is measuring modified yards per attempt, but it does so in a baffling way on a scale that seems plucked from the sky at random. Also, the bonuses and penalties also just seem arbitrary. So, we've attempted to come up with a better passer rating which solves these issues, primarily by keeping it on the yards per attempt scale.

Now, the first adjustment is for interceptions. Interceptions, as we all know, are bad. But how bad? This is where I consult my handy dandy Hidden Game of Football sitting on my shelf. Now, Pete Palmer is a lot smarter than I am, and he's done a lot more research, and he tells me that an interception is, on average, worth 30 yards of field position. That is good enough for me, as A) I trust his research and B) it seems intuitively correct. The average punt nets between 30 and 35 yards, so it seems a turnover would cost you that punt yardage. So, our formula now looks like this:

That's the negative adjustment, but the positive adjustment is to count touchdowns. I've looked at the past decade of NFL quarterback numbers and the average quarterback will have a TD:INT ratio of roughly 3:2. It changes a bit season to season, but it holds roughly steady. For every three touchdowns, the average quarterback throws two picks. I chose to use the NFL averages instead of NCAA averages because college quarterback numbers are all over the place because of disparate talent levels and schedules. The average QB fluctuates wildly from year to year, so I'm going to learn lessons from the more stable NFL statistics on this one.

In a perfect world, the perfectly average quarterback would receive no bonus either way. He wouldn't be negative or positive, he would be at zero and we'd look solely at his yards/attempt numbers. In order to balance the value of a TD pass to interceptions, I assign a value of 20 yards to a touchdown in order to balance that 3:2 ratio. If my perfectly average QB throws 3 TD's and 2 picks, he will receive 0 bonuses (3*20 - 2*30 = 0). So our formula looks like this now:

The other big thing that can happen on a pass play is a sack. And here's where we run into our first major judgment call. The NCAA counts all sacks as rushing attempts, so instead of trying to just parse out all negative rushing attempts, ATVSQBPI counts all rushing attempts. The first reason is ease of calculation. I'm not going to lie, I'm lazy. The second is that not all negative rushes are sacks. A failed option play, for example, would look just the same as a sack in the box score. And once we're counting some rush attempts that aren't sacks, why aren't we counting all of them? But finally, and most importantly, running the football, in college especially, is an intrinsic part of the value of the quarterback. It's what separates good quarterbacks from great ones. Tebow and Newton had that extra dimension of running the football which made them more effective players, and more effective passers. Our passer rating needs to account for the ability to run the football because it is such a huge part of the college game. The fact it makes the formula easier to calculate is just lagniappe. Now look at our formula:

Look, if we're counting rushing touchdowns, we have thrown off our ratio of 3:2 and our perfectly average QB is not at zero, he is in the positives for whatever rushing TD's he can pick up. If he's slow of foot, that's probably only one or two, but for some QB's, it can be a lot more. Jordan Jefferson lived off of his rushing TD's to boost his ATVSQBPI. While fumbles don't follow the same 3:2 ratio with rushing touchdowns as passing touchdowns, we do need some balance to the formula and I'm loathe to value rushing and passing touchdowns differently. I also believe that a turnover is turnover, so lost fumbles should be valued the same as interceptions. They cost a team their 30 yard net punt.

But here we run into another roadblock. A quarterback has little to no control on whether a fumble is recovered or not. Fumble recoveries are essentially random. So why should we punish a quarterback for a random event? Instead of punishing a quarterback for lost fumbles, why not punish him for all fumbles regardless of whether they were lost or not? ORtigerfan argued, convincingly, that we shouldn't count all the fumbles the same for the simple reason that they aren't the same. Sure, it may be luck on who recovered the fumble, but it was recovered. We're attempting to measure what happened, not what might have happened. When the QB fumbles the ball, it could be a turnover, but we should only punish him when that potential turnover actually becomes a turnover. Just as we don't punish a quarterback for dropped interceptions or reward him for dropped passes. Not everything is within his control. So, the formula we will be using this season is:

I promise the future entries won't be as long, but I wanted to explain the formula again before we started springing it on you all season. So, without any further ado, here are the ATVSQBPI's of the SEC quarterbacks and some of the assorted QB's to watch around the country. 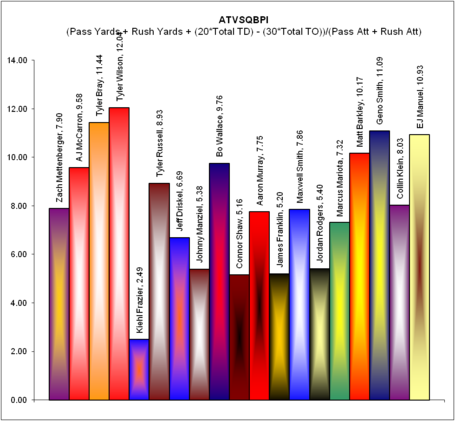 And here's how the defenses match up: 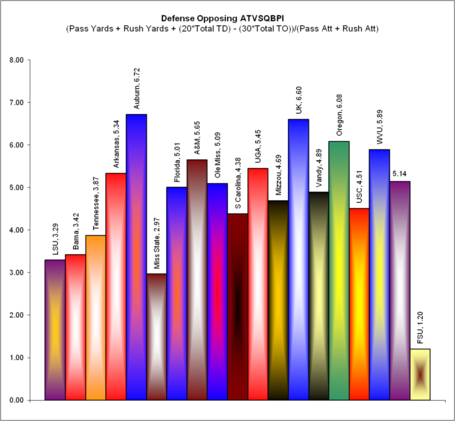 Actual analysis next week. But hopefully this can get y'all started.