Share All sharing options for: Thoughts from the South Endzone - Roasted Potatoes

We were wearing purple and Mike didn't show, but it didn't matter as the Tigers showed some offensive prowess that hasn't been seen at LSU in many years. Even spotting Idaho a listless 2nd quarter and an almost pick 6 was not enough to make the final score remotely close. When this team decides to turn on the afterburners, it's all over but the screaming. 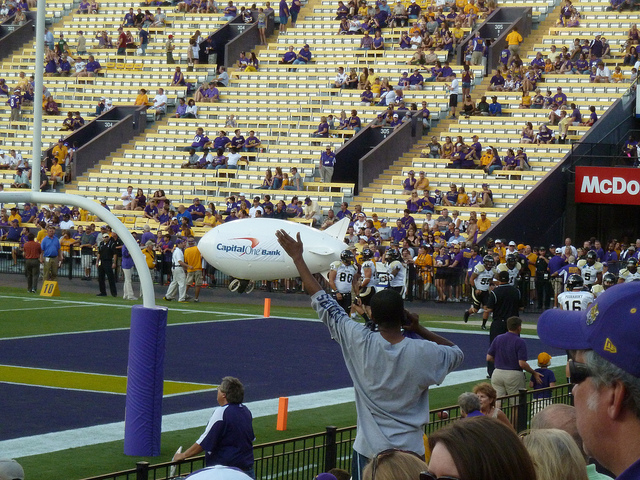 After an unsuccessful launch attempt during the windy Washington game, this little remote control blimp about the size of a Volkswagen Bug flew around during player warmups. The pilot was a bit unsure of himself and it nearly crashed into some Idaho players on landing before it did crash into one of it's handlers, knocking her down like a swift tackle. We had a good chuckle, sure, but when this thing crashes into a player or the stands, I don't want to be around for it. 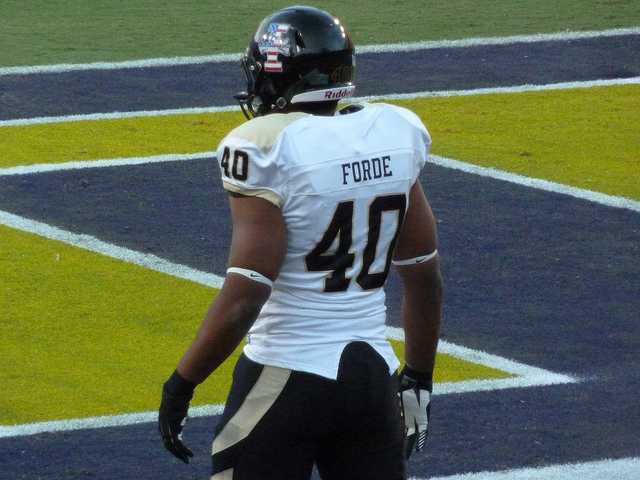 The night's unexpected uniform change may have been the best one. Idaho players came out with a Stars and Stripes version of their helmet decal that really looked great. The rest of the Vandal uni, however, was some of the worst of modern Nike, with different colored panels placed seemingly at random on the jersey, and some sort of stripe thing on the pants that looked like it was on backwards. Just a mess. 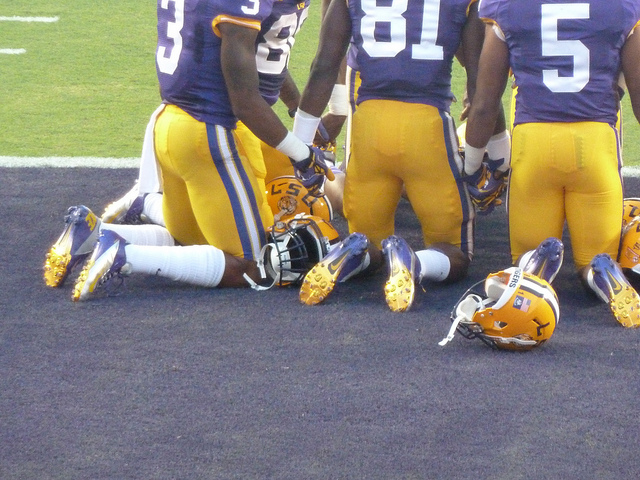 For all the superstition I have about the purple jerseys, we are approaching a 20 game win streak in them, so maybe I just get worried over nothing. The new cleats are gaudy as all get out, and just fantastic. The chrome/metallic paint on the soles reflects the sun and stadium lights so well, you can see it in the grass when players are just standing around. I wasn't able to get a good shot of the gloves, but the purple with gold trim on the backs of the gloves is something I'd like to get a better look at. As for the palms

A look at the gloves for tonight's game twitter.com/LSUFBEquipment…

Amazing. LSU and Nike don't appear to be selling them anywhere, but I'm going to find some way to add them to my collection. 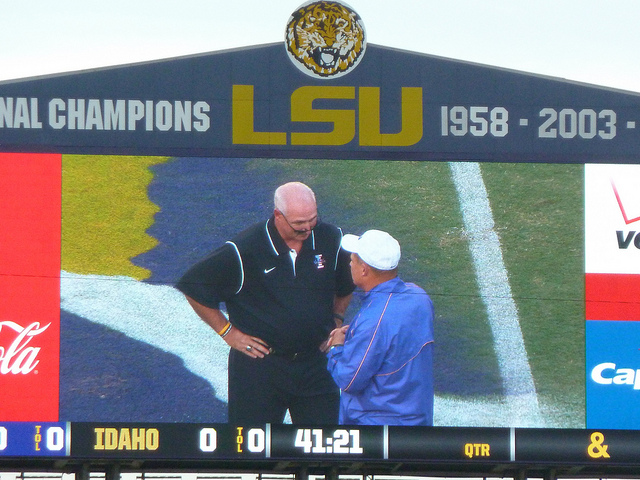 Miles isn't really that much shorter than Idaho HC Robb Akey, so the glasses at the end of the nose stare down in the pregame was kinda goofy. There's no photo of Idaho fans here, because their travel party was one of the smallest I've seen. Aside from parents wearing matching player's jerseys, I counted maybe 7 Idaho fans I saw in person the whole day, and none of them ventured farther than the area immediately around Tiger Stadium. 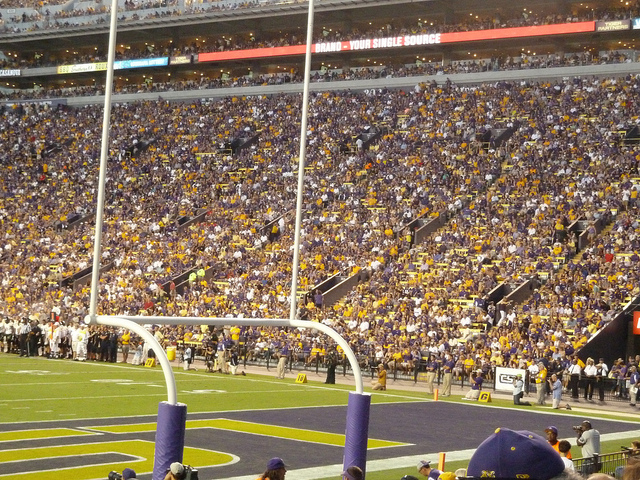 Turnout wasn't as bad as I expected, but the East Stands continue to be a sore spot. Every week, it's the last to fill and the first to empty. It's not like we've had day games where the setting sun is right in their face, so there's no excuse for it. I repeat myself every year: If you don't want to go to the games then give up your seats or at least sell the tickets to someone who does. 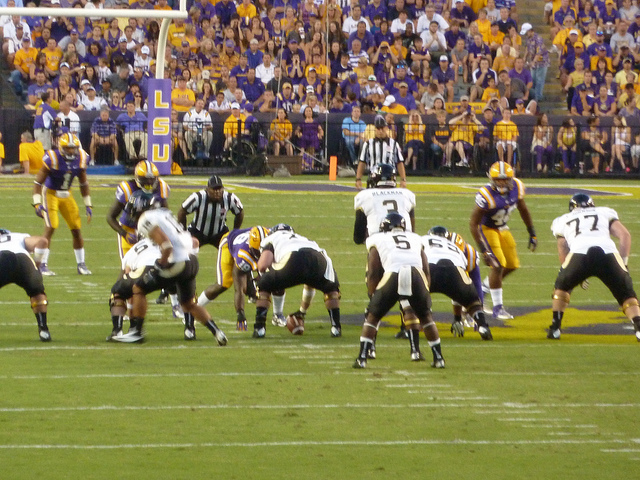 Despite the outlandish score, Idaho deserves some credit. The Vandals had some gumption in them and pounced when they saw LSU take a nap in the 2nd Qtr. You'll not see many teams drive 81 yards in 7 plays and score on LSU this year, so that's something the Vandals can be proud of, along with forcing LSU to punt on the following possession. I'm going to go out on a limb and say that Idaho QB Blackman, down 14-21 to LSU and starting nearly in his own endzone, knew exactly what he was doing when he turned and pointed to the (at that point) sleepy student section behind him and teased them into a full roar. If your an opposing QB, playing in a game that is essentially meaningless to your season except for the paycheck, wouldn't you want to have the experience of playing in the most hostile environment you'll ever experience in your life, just to say "Yeah, I did that"?

The problem was, the rest of his team was not so daring and nowhere near ready for that kind of pressure. 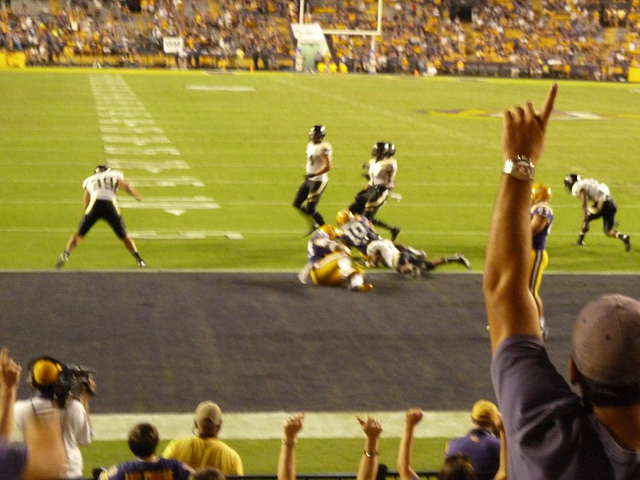 I was all over from there as the back to back TD's from Lavar Edwards' rumblin' stumblin' INT return and Kenny Hilliard's 74yd TD run put the game back in the comfort zone early in the 2nd half. 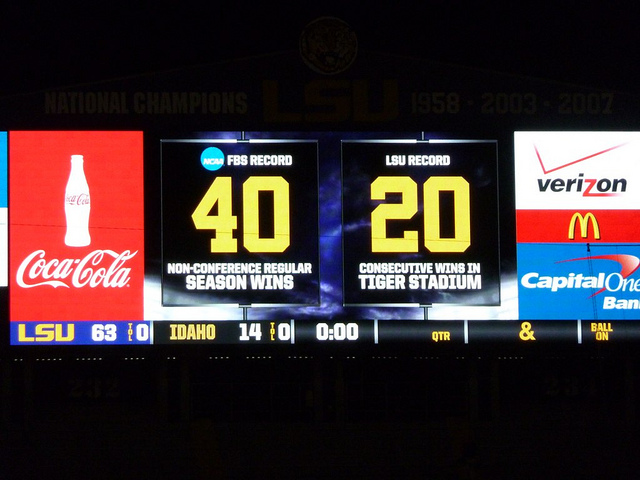 We know Miles usually likes to ease off the gas in these games, but the score is almost more impressive than either of the 2 records that were set. LSU hasn't scored 60+ points since the Dinardo era, and it was the highest combined point total in Tiger Stadium since 1991. 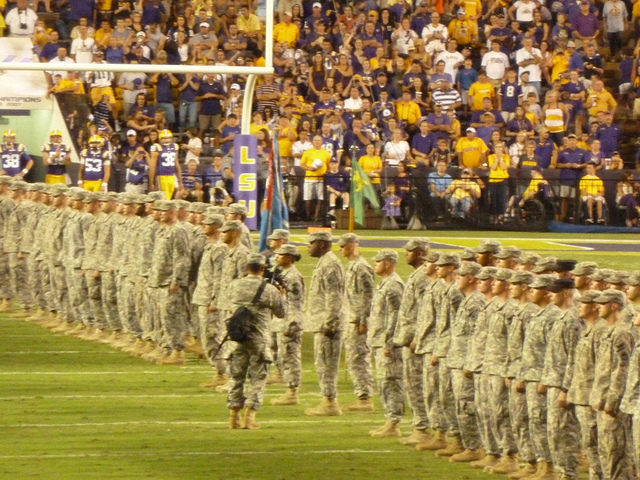 Can I give an incomplete? It was half of last week's show, flipped for the East stands and shortened for the military presentation. Honoring the returned National Guard units was a great moment, but it could have been better. There has been a trend this season to drop some music backbeat behind everything Dan Borne says that isn't him calling a play. When it's just in-stadium ads, it's no big deal, but it's unnecessary when he's introducing former players or special guests, and it's nearly inappropriate when he's introducing 200+ members of the National Guard. There can be moments of dead air on the PA, guys. We won't go crazy if there's nothing to listen to for a few seconds between Borne speaking.

Speaking of TGBFTL, we may have had the quickest playlist add/playlist delete in stadium history as those whippersnappers in the student section are at it again. The above is a percussion/tubas warmup that the band plays in practice or before prepping to start marching down the hill. It's been played in a few college bands as a warmup, but I'd never heard it played during a game before. It was played twice in Tiger Stadium on Saturday, with the alternate lyrics from "Neck" getting applied to it on the second go-round. Word on the street is the number got an insta-ban. I'd like to commend the student section for showing an impressive feat of musicianship in finding the right beat to start chanting the naughty words on with just one play through.

This escalation can only mean one thing: The students are going to start chanting dirty words until every song gets banned. (You think I'm joking? just wait till they get bored in the 2nd qtr of the Towson game and start plotting how to chant during Hey Baby) My stance is the same as it always is. There is no point in the administration trying to fight a student body that turns over every few years if that student body feels duty bound to pass this prank on to each new class.

The only real loser in all this is the long banned song "Hold That Tiger", whose added chant of "asshole" seems positively tame compared to the student section's current favorite FCC violation.

Next Week: LIVE FROM THE PLAINS!