#HateWeek: A Mid-Week Reminder That LSU is Playing Auburn

Share All sharing options for: #HateWeek: A Mid-Week Reminder That LSU is Playing Auburn

So it's Wednesday and LSU is playing Auburn. Not that you'd know it from the vibe on campus. And yeah, a lot of that is due to some news you might have heard re: campus and such. Nevertheless, this is Auburn we're talking about.

Yes, I know they needed overtime and a little bit of luck to beat ULM last week (I bet Arkansas wishes they could say that). Yes, they were completely embarrassed by Mississippi State and f_cked by Clemson. But LSU is still playing Auburn this week, IN Auburn.

We hate Auburn. Okay, maybe it's not genetic hatred the folks in Tuscaloosa have for 'em. But we still come by it honestly. Because bad, bad things happen in Auburn, Alabama.

Need I remind you people?

That's to say nothing of one of the five leaping penalties called in the entire history of football that allowed them to get a second chance at a game-winning extra point in 2004. Auburn taught us the name Penn Wagers, and for that reason alone they shall never be forgiven. And it is also for that reason, that we'd all better pay attention to this damn game.

Bad, bad things happen in Auburn, Alabama because nothing GOOD ever happens there.

It's a tiny, podunk cow-town in the middle of nowhere, backwards even by SEC standards. At least Mississippi is kind of proud of Oxford and Starkville. The state of Alabama would ship Auburn off to West Georgia in a heartbeat, and most would tell you they already have.

The nicest thing anybody's ever said about Pat Dye was that he was a drunk.

The nicest thing anybody's ever said about Gene Chizik is that he's a sharp dresser. 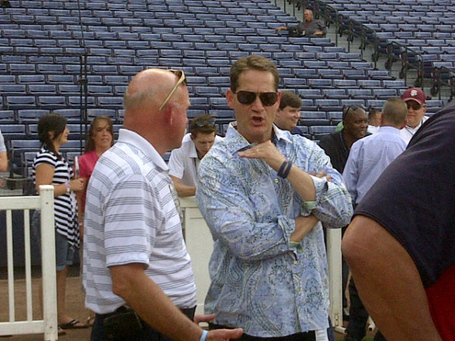 He'd never admit it, but you know Dye watches Chizik and thinks "I coached football for 18 damn years and won 150 games. Four SEC titles. But I'm the one that got put on probation and you're the one with a national championship?" He probably follows that up with "damn I love scotch," but you know it's rattlin' around in that Auburn brain of his.

Auburn produced Junior Rosegreen, who is probably still telling people about how soft Josh Reed was, even after that 10-catch 186-yard bombing in 2001. Auburn produced Damon Duvall, still 0-fer the Golden Band from Tiger Land. Auburn produced Chaz Ramsey. Hell, even in their finer moments, Auburn once made me feel bad for Brodie Croyle, which it STILL feels dirty to type out on a screen. Auburn is the home of a bunch of deviant students that wave these things. 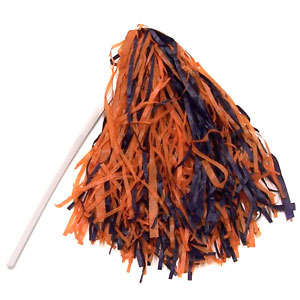 Sure Auburn students, totally not a pom-pom.

Auburn does few things well. Ruin Spencer Hall's day. Produce a good scandal. I'd like to put "hate Alabama" on this list, but you can't even count on them to win that game when you really want them to. And it's been a while, but once upon a time they were real good at ruining LSU's season, especially at home. And this Saturday night, LSU travels to Jordan-Hare Stadium, in Auburn, Alabama. Where bad, bad things happen. Never forget.