ATVSQBPI Reminds Us that Bama Is Good

Share All sharing options for: ATVSQBPI Reminds Us that Bama Is Good

We check on the ATVSQBPI performers this week by first looking at how teams did in their individual games. To be honest, ATVSQBPI isn't that useful in a one-game environment, but it sure is fun to look at it because you get crazy-ass results. And what fun are statistics unless we get to spend time with outliers? 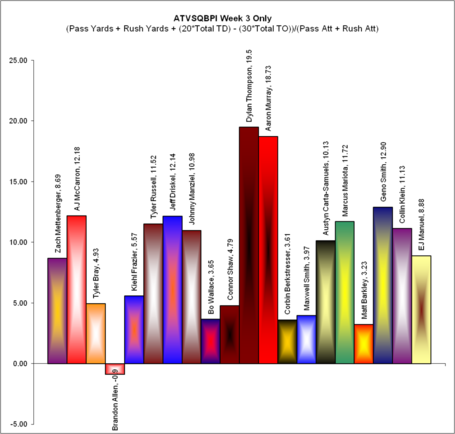 The one thing that should jump out on this chart is that Brandon Allen had a very very bad week. Posting a negative ATVSQBPI is one of those things nearly impossible over the course of a season, but in one game? Against Alabama? Sure thing. Allen was worth -0.09 yards each time he touched the football, which means Arkansas would have been better off had he just spiked the ball on every play, starting in the first quarter.

This just in: Alabama's defense is good and Arkansas' offense is not.

On the other end of the pendulum, Dylan Thompson and Aaron Murray tried to break ATVSQBPI by putting up numbers near twenty. What does this mean? Nothing, other than that they played really bad teams and lit up and overmatched secondary. But it sure is fun to see them have, quite literally, infinitely better games than Allen, according to the formula.

Thompson's numbers do suggest that USC does not have a quarterback controversy, they have a guy who is about to get benched for good. While Thompson was busy trying to flip the counter, Connor Shaw struggled to move the football at all. It's easy to read too much into one game, particularly against a terrible team, but Thompson's performance just blows Shaw's out of the water. Throw in the fact it appears Shaw is trying not to die out there, and I think the OBC's decision is rather easy.

I've been promoting Tyler Bray and selling Jeff Driskel short, but in their matchup, there was one clear winner... and it wasn't Bray. Bray had a below average ATVSQBPI of 4.93, driven primarily by his two interceptions. Driskell's huge edge is not really in the yards, but in not turning the ball over. Both quarterbacks threw for two touchdowns, but Driskell took care of the football, so he posts the big number and gets the win.

Nationally, we can see Matt Barkley's Heisman candidacy die, in convenient graph form. Barkley's 3.23 rating was worse than Kentucky's Maxwell Smith's 3.97. That's right, Barkley was worse against Stanford than Maxwell f'n Smith was in the most embarrassing loss of the SEC weekend. There's not much positive to say about a game marred by -42 yards rushing on 6 carries (READ: sacks) and two interceptions. Stanford ain't Hawaii. 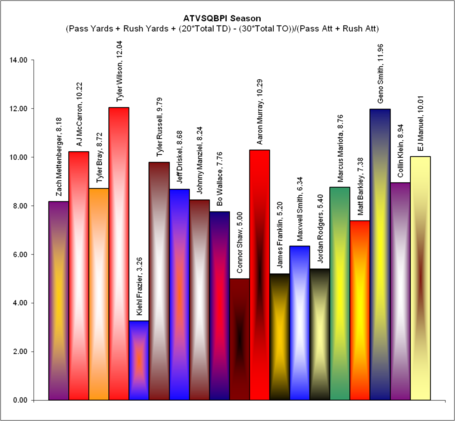 Turning to the season numbers, it's still way too early to make any sort of judgments, primarily due to the quality of play. Oregon is yet to play a team with a pulse, so Marcus Mariota's 8.76 is pretty much worthless right now. He could be the answer, he might not. Always look at numbers gained against bad teams with a grain of salt the size of the Rock of Gibraltar.

However, what is interesting is A.J. McCarron's performance so far. Alabama has actually played some teams, so it's hard to call his numbers an illusion of schedule. The standard line on McCarron is that he is the dreaded "game manager", whose primary job is to hand the ball off to his running backs. But the numbers don't exactly bear this out. 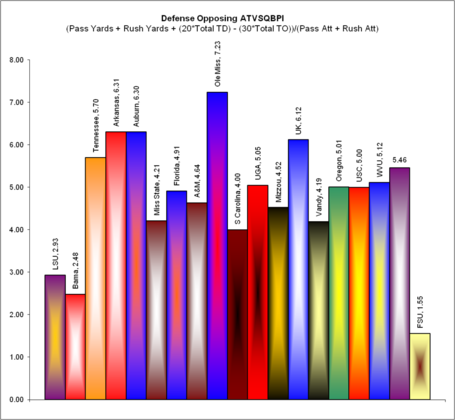 What isn't surprising is Alabama's defense. The only SEC team with a defense even within a snowball's toss of Alabama's performance is, not surprisingly, LSU. I feel like I'm going to bust out into hives saying all of these good things about Alabama, but the numbers aren't lying to us. Alabama has a suffocating pass defense to go along with its quarterback who is currently playing at a Heisman Trophy level.

Look, there's a reason people sell their souls to Satan. It clearly works. Alabama may be evil, and they may be coached by the guy Will Rogers never met, but there's no denying what they have accomplished so far this year.

Alabama is the team to beat.