LSU vs. Auburn: What To Watch For

Share All sharing options for: LSU vs. Auburn: What To Watch For 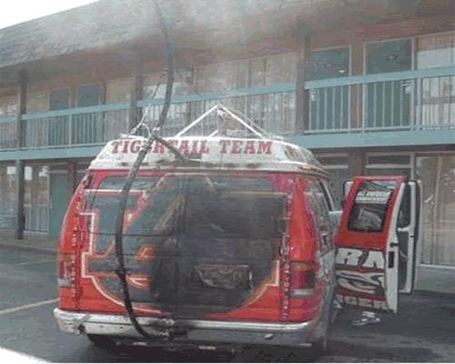 Remember what I said last week about this year's schedule being kind of slow going? Didn't really think conference play would be included. And yet here we are, a day out from LSU opening SEC play at Auburn as nearly a 20-point favorite. That just seems completely insane to me. Not that there's anything wrong with LSU being heavily favored. Auburn looks pretty bad. Maybe worst-in-the-league bad, though there's still three-quarters of a schedule to determine that. Just something about going into Jordan-Hare that gets the dander up.

Still, as we hit the lead-in to the meat of this 2012 schedule, winning only becomes more and more important, as does continued improvement. And at this point, the thought of losing any more contributors to injury is legitimately scary.

This might just be the quietest Auburn week ever. I mean two hate posts and not so much a peep. Almost disconcerting. Never forget -- bad, bad things happen in Auburn, Alabama.

What to Watch for on Saturday

Part of what's been a bit surprising about Auburn's fairly awful defensive track record as of late, is that they don't just have one very good defensive coordinator on hand, they have two. Brian Van Gorder's philosophy matches up fairly well with Gene Chizik's, in that both are fans of simplified, zone-based defenses that aim to keep fast players reacting quickly and playing aggressively.

People tend to have more of a negative reaction to the connotation of zone defense. Bend but don't break (more on this in a moment). Un-aggressive. In general, it just sounds so much more baddass to think you just man-up on your opponent and dare them to beat you. Except that no matter how good your cover guy is, the receiver will always have an advantage of knowing where he's going, and your defensive players will be forced to turn their back on the ball, which can also be a major weakness against an athletic quarterback.

This past spring, I was lucky enough to sit in on Tony Dungy's keynote speech at the LSU High School Coaches Clinic. Between that and the Cover-Two chapter of Tim Layden's Blood, Sweat And Chalk, I was able to get a better feel for the staple Cover-Two defense that most football fans became familiar with in the late 90s. Of course it's much older than that, with its roots in the Pittsburgh Steelers of the 1970s. The idea being, that a simple, well-taught and disciplined zone defense can allow a defense to keep an eye on the ball and flow to it quickly. React without having to figure out what is going on. 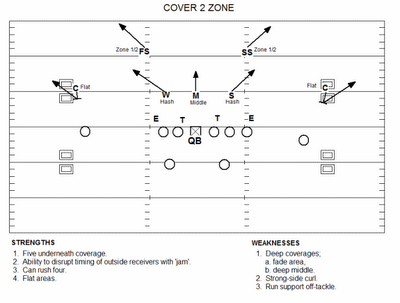 The primary feature to this scheme is, of course, the two safeties each taking the deep halves of the field. The corners role up into the flats and the linebackers into the seam and curl zone areas. Dungy himself will acknowledge that there will be times where the offense gains yards. But if the defense can consistently execute its assignments, the gamble is that the offense won't be able to consistently move the ball long distances without the luxury of a big play. Truthfully it's not that different from the Air Raid, the Spread Option, etc...Simple ideas, executed to perfection. And of course, if you have defensive linemen like Joe Greene, Warren Sapp and Simeon Rice up front; linebackers like Derrick Brooks, Brian Urlacher or Jack Lambert running everything down in the middle; and smart, aggressive DBs like Ronde Barber, Mel Blount and John Lynch on the back end, all the better.

Van Gorder and Chizik have had tremendous success, be it with the Thomas Davis/David Pollack/Odell Thurman Georgia Bulldog units 10 years ago, or Chizik's Junior Rosegreen/Travis Williams/Stanley McClover outfit, which paced Auburn's 2004 SEC title squad. But Auburn doesn't have that those types of players this season.

Corey Lemonier is a very good defensive end, and linemates Gabe Wright and Nosa Eguae are solid enough. But the linebackers have really struggled (despite the high tackle numbers for Darren Bates and Jake Holland) and the secondary has managed all of one interception through three games while allowing a 65-percent completion rate. The other Tigers are at or near the bottom of the SEC in just about every major team defense category, and have allowed 46 plays of 10 yards or more this season, the 12th-highest total in the SEC.

The good news for LSU here is that attacking this unit won't call for much of a change from what the Tigers have been relying on -- the running and possession passing games. The obvious hole in Cover-Two is 10-12 yards down the sidelines, between the cornerback and the deep safety. The Three-Level passing concept, which has resulted in two different touchdown plays for LSU this year, could get a heavy look. Here's a diagram of Zach Mettenberger's 32-yard scoring toss to Kadron Boone from week two, courtesy of the designers at DIG Baton Rouge, which make my chickenscratch drawings look a whole lot better. 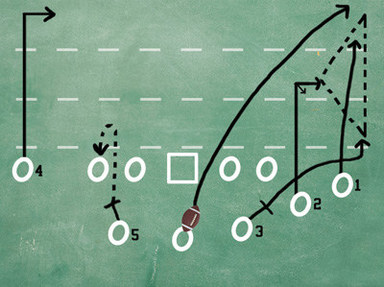 Versus a two-deep zone, the idea here would be for the vertical route on the sidelines to drive the safety back, "taking the top off the defense" (hehe) as they say in Bristol. The flat route will occupy the corner and essentially create a one-on-one situation for the slot receiver, likely Jarvis Landry versus a linebacker or nickel corner. I think LSU would view that matchup as a plus one for them in most scenarios. And of course, we've seen how pounding those short and intermediate routes can set up the double-move. Hi there, Odell Beckham. Haven't seen much from you in a while...

The matchup of Lemonier versus Josh Dworaczyk could be worrisome, but expect LSU to slow him down structurally with some draw plays and quick throws to stem is rush. If he can rebound from last week, that might be a good harbinger for future matchups with Jadeveon Clowney and Texas A&M's Damontre Moore, the current SEC sack leader. Additionally, don't be surprised if Alex Hurst swaps over to the left side with Vadal Alexander on the right (Lemonier will line up on both sides on occasion), in order to try and simply tire out the 250-pounder by running right at him behind Hurst and Alexander's combined 700-plus pounds of bulk. And without Alfred Blue in the lineup, this game could feature a whole lot of power plays with Kenny Hilliard, Spencer Ware and Jeremy Hill. Which account for another 675 pounds of manimal.

Auburn is limping...er...gliding? What does a wounded eagle do? Oh wait, they're the Tigers? Tigers limp...Plainsmen? What do they do? FUCK!...Anyway, Auburn comes into this game 1-2, and the one came against UL-Monroe. They NEED this game, and we should expect them to play like it.

Offensively, the PlainTeagles appear to be caught somewhere between the Malzahn attack they've ran the last three seasons and new OC Scott Loeffler's more pro-style roots. The mishmash is somewhat understandable, because that's the personnel on hand. Kiehl Frazier was recruited for the Malzahn attack, as were shorter, quicker wideouts like Quan Bray, Trovon Reed and speed runners Onterio McCalebb and Tre Mason. Top targets Emory Blake and Philip Lutzenkirchen, and tailback Mike Blakely are more of a fit for what Loeffler would like to do.

Statistically, third-down is Frazier's biggest problem at the moment: he's completing just 44-percent of his passes, thrown three interceptions and converted just under 28 percent into first downs. And despite some solid athletic ability, he's only averaging .84 yards per carry, including five sacks. Still, don't be surprised if Auburn tries to let him throw quickly on first-down, trying to mimic Idaho's gameplan for stemming the Tiger pass-rush last week.

But more importantly, expect Auburn to come out fired up and ready to compete. Bulletin-board bullshit aside, this is an SEC game and LSU should be ready for Auburn's best shot. Night game, in a stadium that gets as loud as any in this conference. Yeah, there's pessimism in the air in Auburn, but that only works if the Tigers show up and calmly and coldly do what they do and throttle those other Tigers early on. Jump out in front and latch a double-digit lead on the board, and things will go quiet. But LSU needs to avoid a slow start.

LSU fans, occasionally, engage in some sort of offense snipe hunt. For a perfect game that just isn't out there. If the running game is averaging 10 yards a pop and LSU runs for 300 yards, the passing game didn't get enough work. If LSU were to come out slinging it 35-50 times, everybody would wonder what's wrong with the running game. Some of it is still the sting of last January, but most of it is just the systemic frustration borne of a fan base that has been sold the idea that great programs are bulletproof, football games are easy and that Les Miles hates passing.

I remain confident that we haven't seen the best from the LSU passing game. It's still growing and finding its way -- the fact that it IS growing is a radical improvement on years past. But Mettenberger is going to turn into Peyton Manning overnight. And this week, the offensive recipe of the first three weeks dovetails perfectly with LSU's opponent. Auburn can't stop the run and LSU runs the ball exceptionally well. That's what you're going to see on Saturday. The passing game will still take what the defense gives to them, because if you can do that as a quarterback, the big plays come on their own. Eventually Auburn takes a chance, or bites on a play-fake or double move and boom. But when you average 5.9 yards per carry and 269 yards per game, and you're facing a defense that allows 5.05 yards per carry and 216 yards per game, you run the football.

LSU finally has an offense that can do what works, be that run or pass. But for this week, that's still going to be the run.