A weekly look at how LSU's previous and upcoming opponents fared in week four.

The Mean Green dropped a heartbreaker to the Trojans, Alabama Edition, despite winning the yardage and time of possession battles. The culprit: special teams and a 2-for-14 night on third down. UNT missed three field goal attempts by two different kickers, and per beat reporter Brett Vito of the Denton Record-Chronicle, "The road to 6-6 looks awfully long." Dan McCarney's crew fell to 1-3 on the year and 0-1 in SunBelt conference play.

The Vandals fell in extra time to Wyoming, who scored a touchdown after giving up a field goal to Rob Akey's crew. Looking at the boxscore, Idaho somehow ran 87 plays to Wyoming's 66, but the Cowboys made up for the lack of quantity with quality, averaging 6.7 per play to Idaho's 5.9. It should be no surprise that Akey was still optimistic after the game:

"We ran out of time, we weren't able to win the game. Is that good enough? No. Was that improvement from the first week? Yes. That's what we call growth and that's what I have to pay attention to."

When you're 0-4, you gotta find the silver linings where you can I guess.

Auburn (y'all remember the score)

Per our United mates over at College and Magnolia, the Auburn administration is looking ahead to next week's (Auburn is off this weekend) matchup with Arkansas by asking the students to show up and match the atmosphere Jerrdan-Hare Stadium had on Saturday. 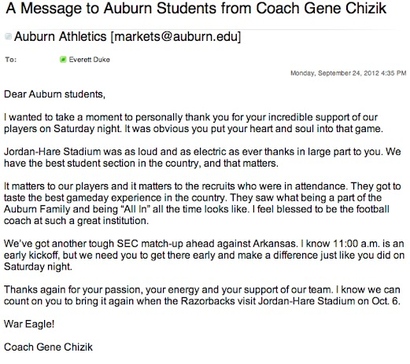 You might say this week's visitors handled their homecoming opponent in SEC fashion, racking up 441 yards of offense, including 262 on the ground. FCS All-American running back Terrance West scored three times, giving him a whopping 34 touchdowns in his last 14 games.

Saints fans might at least recognize the name, given that left tackle Jermon Bushrod played there. The Tigers were an FCS playoff team last season, and are currently ranked 12th in the polling at that level. We're currently working to maybe get some Towson perspective on their trip south later in the week, but for my fellow children of the 90s, lookie who played their homecoming concert over the weekend.

Will Muschamp should be joining Gene Chizik on Bye-Week Buddies, which means a battle of undefeateds in the Swamp in two weeks. Over at Alligator Army, the crew is excited about their team's growth, but still a bit cautious about the future, particularly due to an offensive line that is struggling a bit. Andy Hutchins' crystal ball remains a bit cloudy.

This game didn't even look this close, as the Gamecocks just appeared to maul the SEC East's pledge. Over at Garnett and Black Attack, they are largely happy with new defensive coordinator Lorenzo Ward, albeit a little apprehensive over having a 73rd-ranked pass defense despite a schedule that hasn't faced many noteworthy air attacks. Connor Shaw just might have turned a corner against Mizzou, with not only his best game, but one of the best in league history: 20 of 21 for 249 and two scores, plus 41 yards rushing (and he had an 80-yard run nullified by a holding penalty).

In other interesting news, Steve Spurrier, usually very affable towards media, is all but engaging in a total blackout, likely due to his ongoing feud with the very Gannette-ish columnist Ron Morris, whom questioned the OBC's judgment in the handling of Shaw.

Five total touchdowns from Johnny Manziel, who looks like the next superstar quarterback of the league right now, averaging right at 300 yards of total offense per game. Over at our new United affiliate Good Bull Hunting, they seem a little worried about how the ballyhooed offensive line is adjusting to Kevin Sumlin's system.

The Aggies get Arkansas this week, and JohnElle would like to have a few words.

No shock here, as the Tide held FAU to all of 110 yards of total offense. A.J. McCarron is still interceptionless after four games, albeit against the little sisters of the B1G and three SunBelt teams. If there's been a surprise through Bama's first month, it's that the kicking game is markedly improved. Even with Ole Miss coming to Tuscaloosa looking more lively than usual, the Tide aren't likely to be challenged until Nov. 3 and they know it.

Dan Mullen's crew slept-walked their way by another cupcake in week four, causing the gents at For Whom the Cowbell Tolls to wonder if there's a focus problem in Starkville. Dealing with success can, on occasion, be as hard, if not harder, than simply getting to the point of success and this is new territory for the State program. State is off this week, and 4-0 for the first time since 1999, and there's really no reason they shouldn't be 7-0 when they travel to Alabama on Oct. 27. The only potential hiccup could be Tennessee on 10/13, but even then the Vols have to come to Starkvegas.

The Rebel Black Bears made Sad Greenie sad, albeit in classy fashion by honoring the Green Wave's injured Devon Walker. Ole Miss may be to Alabama what State is to us, but that doesn't stop the boys at Red Cup Rebellion from conjurin' up some hate. And no, they haven't forgotten Shay Hodge in 2007.

Meanwhile, JUCO All-American is wondering just what would constitute "success" this week in Tuscaloosa.

Oh...Arkansas...For starters, if you didn't know, junior Cobi Hamilton broke Josh Reed's SEC record for single-game receiving yardage by catching 10 passes for 303 yards and three touchdowns. He and Tyler Wilson appear to be the only Razorbacks really trying at this point though. Knile Davis currently has all of 208 yards on the season, and is averaging 3.25 per carry.

At Arkansas Expats, the potential 2013 Head Coach Candidate Tracker is up, and Charlie Strong of Louisville appears to be in the ‘Backs' crosshairs. Meanwhile, Zack Veddern is presenting the rest of JohnElle's very, very odd Monday press conference, in which he implied that Bobby Petrino may be headed back to his old stomping grounds at Auburn.

Ed. Note: Washington was off this week.