Or How EJ Manuel Emerged as a Heisman Candidate

Once again, thanks to the hard work of ORtigerfan, we can take a look at ATVSQBPI on a weekly basis. Because we all know I would not go to these efforts of data gathering. He did include a chart this week for SEC stats, which I'm not including this week because it is fairly worthless right now. I'll probably include it next week, as most teams will have two SEC games under their belt. Just know that it is looming on the horizon as even my charty goodness we're gonna bring you.

So, first up, let's look at how our quarterbacks did last weekend. 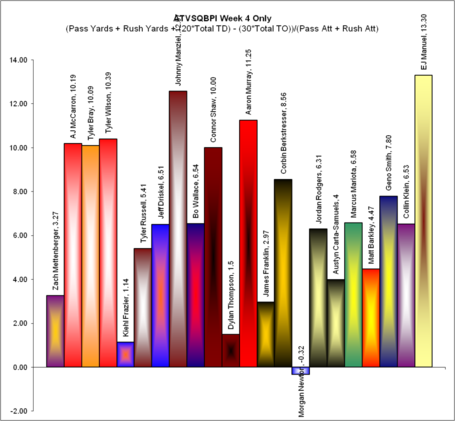 Zach Mettenberger did not set the world on fire in his first SEC road game. It's easy to blame his performance on turnovers, as he did fumble the ball twice, but even if you remove those fumbles his ATVSQBPI was only 5.09. There's no other way to say, the Mettensavior has to play better to live up to his nickname.

Seven quarterbacks posted an ATVSQBPI of 10 or above, and those numbers are varying degrees of impressive. Manziel, McCarron, and Murray put up big numbers against outmatched foes, so it's hard to draw too many conclusions there. I'd like to say Tennessee outmatches Akron, but the Vols actually needed Bray to play that well to eke out a win against a 1-3 MAC squad. Tyler Wilson showed that he can live up the hype and Arkansas can still suck. Perhaps his injury wasn't that big of a deal, as the Hogs seem determined to lose no matter how well their quarterback plays.

The two real impressive performances were turned in by Connor Shaw and E.J. Manuel. A week ago, Shaw looked liked Spurrier's plan to have him killed on the field was working. This week, he looked like Spurrier reborn on the field while it was Thompson's turn to be ineffective. I have no idea what to make of USC's quarterback situation other than that's just Spurrier. Clemson's defense is not exactly stout, but Manuel had one of the defining games of the season so far, and with the early contenders all disappointing, put his name into the ring for the Heisman. Big players have big games on the biggest stages.

Collin Klein and Marcus Mariota both demonstrated you could have a big game with a defining performance without breaking our formula. Both put up average ratings but don't be deceived, both had a huge game.

Oh, and Kiehl Frazier can take solace that Morgan Newton had an even worse game than he did. Auburn had a shot at the upset, but subpar quarterback play doomed their chances. One of the reasons I wasn't that nervous during the game was that the Auburn offense couldn't move the football at all. 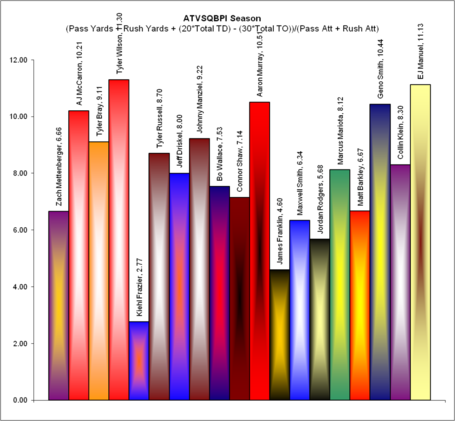 Turning to our season numbers, Tyler Wilson is giving football fans a lesson in pyrrhic victories. Wilson now seems doomed to put up big numbers for a team going absolutely nowhere. EJ Manuel is giving off the whiff of a Heisman contender, but you want to be a contender in November, not September. He has to keep his level of play up to this level now or else he'll be seen as getting worse as the season wore on, which is silly.

Aaron Murray and AJ McCarron seem to be our leading contenders for the SEC's most productive quarterback. I talked about McCarron's success last week, but Murray being on top of the scale is no surprise at all. Murray has been one of the more hyped players in the SEC and given everything bad that has happened to Georgia over the past few seasons, it's nice to see one of their players live up to the hype. Especially when they aren't on our schedule.

If someone had told you before the season that Mettenberger would have the same passer rating as Barkley, you'd have thought that was a good thing. OK, it's not a terrible thing, as both of them are hovering around league averages, but neither is setting the world on fire. Given that Mettenberger is a first-year starter, Barkley's struggles are far more noteworthy.

You know what's awesome? Our defense. LSU and Alabama's defense are nearly lapping the pack in preventing production, which is no great surprise. Florida St. is in the same ballpark, and they had to play a prolific Clemson offense. Alabama shutdown a guy Notre Dame housed and an Arkansas team without Tyler Wilson. LSU shut down the least productive quarterback in the SEC. On these grounds, you can make a case for the Noles having the best pass defense.

I am honestly surprised Kansas St. isn't among the leaders. However, it's still early and as you can see, most defenses are pretty bunched together. We should start to see some separation now that teams aren't playing Directional State.