LSU vs. Towson: What to Watch For

A look at some things to watch for and expect for LSU's Saturday matchup with Towson.

Share All sharing options for: LSU vs. Towson: What to Watch For

It can be funny how a football season works out sometimes, especially with regards to schedule. It's never fun going through the cupcake portion of the schedule within the season's first month, but in this particular case, Towson comes to Baton Rouge at the right time.

Coming off last week's odd, sloppy effort against Auburn, this is the perfect time for the Tigers to press the reset button and get back to basics before the wild SEC ride begins in October. The visiting Tigers of Maryland are currently ranked 12th in the FCS top 25, coming off a Colonial Athletic Association title in 2011, and an appearance in the FCS playoffs. This likely makes them a hair better than the average FBS bottom dweller that fills out a major program's last non-conference spot. 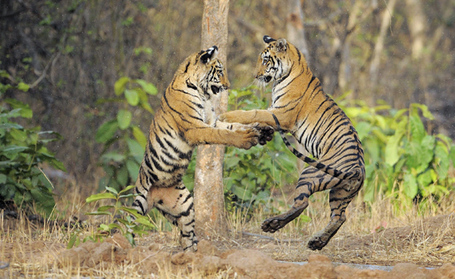 Don't you love it when life hands you the easy metaphors?

LSU, quite simply, is playing themself this week. Strategically, LSU's gameplan will be what it is: power/zone running and concept passing on offense; fast and hard-hitting defense that stops the run with numbers and rushes the passer with speed. The basics of that won't change at all this season. Saturday, the focus will be on execution that while cutting down on the unforced errors that plagued the Auburn game, and poked up from time in the three games before it.

Specifically, I'm talking about the things that LSU can correct with simple focus -- drops and penalties. For the former, players like Odell Beckham Jr. (he needs to earn the ODB title back for now), James Wright and Russell Shepard need to treat this game like an opener. Back to basics. Run your route, and when the ball comes your way, just play catch. Don't worry about anything other than that. They can't score on every play and they can't make up for the past drops -- in fact they shouldn't even think about the previous four games. Just play. They'll get the ball, and they're going to get it on high-percentage throws, just as we've seen every week. In the case of Beckham and Shepard, the little things will be what lead to the big ones. Worry about that first.

Beckham certainly seems to be pressing. Particularly on punt returns, where he's consistently taken foolish chances in trying to make a play. This week can be a reset for him. He can't make up for the drops, and he can't make up for the mistakes. Good news there -- LSU won all four games, so there's no need. Just play. If the punt is there to field, get under it and the play will be there. If it's not good, call fair catch, or stay the hell away from it. Beckham and this offense have proven what they can do with the ball; there is absolutely no reason to take a chance to make something happen. Ditto with in the passing game. We all know what Beckham is capable with the ball in his hands. But without the "hands" part, it doesn't matter. Make plays over these final eight games, and nobody will remember the mistakes in the first four. Just play.

Speaking of proven players in need of a reset, Eric Reid could use a similar return to basics. Find his...

LSU's been asking more of him than usual, similarly to Brandon Taylor. More man-to-man coverage, run support and curl/flat zone defending, whereas last year he was much more in center field. It's a lot to ask, but he's got the talent to handle it better than he has thus far. Because here's the thing -- it hasn't been the kind of mental mistakes you typically see from such an increased role. In all of the last four games, I can't remember too many times in which Reid has blown an assignment, bit on a misdirection/fake or been caught out of position. The issues have been more fundamental, like bad tackling or bad pursuit angles. If I had to guess, like Beckham, he's pressing out of a sense of urgency to make plays. Not exactly uncommon for a talented defender, and easily corrected with a renewed focus.

Wax On, Wax Off 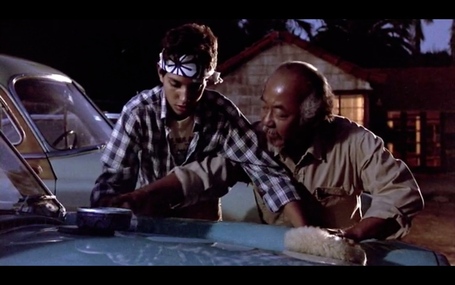 Oh Mr. Miyagi...how the world could use your folksy, Eastern wisdom right now...

Still, I'm of the opinion that LSU's issues at the moment are nothing so systemic that they cannot be overcome with some polishing and tightening up.

Focus on the little things. Finish a block. Wrap up a tackle. As previously mentioned, run a route and catch a pass. Do those things and the big plays take care of themselves. In the coming weeks, there will be plenty of time to worry about what the other team is doing. Right now, LSU needs to focus on getting the things within their control right.

This will solve the drops and most of the penalties -- the stupid offsides and personal-foul types. As for the protection issues, some of those can be corrected -- specifically with regards to timing and technique issues. As for personnel:

Here is video of just about all of Corey Lemonier's plays from last Saturday's Auburn game. Like Paul, I was able to use this to get a good look at Josh Dworaczyk's game. Of the 37 plays illustrated, Dworaczyk struggles with Lemonier six times, runs and passes. Now, that's not a good job by any stretch, but its hardly the constant ole-ing the Humanoid message board echo chamber has turned Dworaczyk's performance into.

He's not going anywhere folks. Even if something changes and Dworaczyk isn't necessarily starting at left tackle, he'll still be somewhere along LSU's front, as long as he is healthy. He's an experienced, respected leader on this team, frankly a nasty run blocker that typically uses great technique. He's going to have his struggles and his successes -- and how much of either will likely change week to week. This week he can take a step forward with a strong performance.

The Deep Breath Before the Plunge

Last season was amazing largely because of how easily LSU tore through most of the SEC schedule. Amazing because that doesn't happen in this league that often, even to the elite squads. People are worried that last week exposed some flaws that good teams might be able to expose, and they should be. But here's the thing. Every team has flaws year-to-year, it's just a question of whether or not an opponent will find a way to exploit them. And LSU is about to face a slate of teams that each have the talent to beat a lot of teams in this country. Here's the reality: in two weeks, LSU will play at a No. 11 Florida team that could be in the top 10 by then (idle this week); after that, they get a very talented South Carolina team that will at least be ranked, and could also be top-10; then, they go to Texas A&M, whom will likely be 5-1 and ranked as well. That trio wouldn't be easy, even if LSU had blown away Auburn last week. If that didn't concern you before, it should have, regardless of last week's score.

But LSU gets one more game to prepare.