LSU wins and I want to throw up.

What the hell was that?

No, really. What was that? I know, I know. A win's a win and all that, but that was one of the least impressive performances LSU has turned out in a half decade. To call that uninspired is an insult to the mediocre among us.

This game was a flaming bag of dog poo. 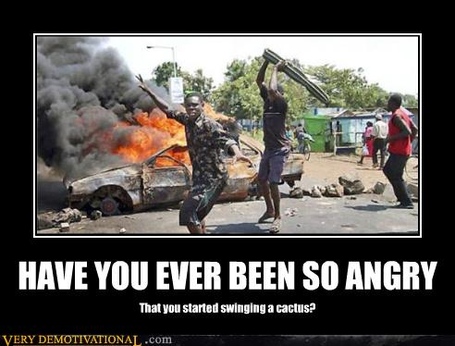 How horrible was this performance? Zach Mettenberger didn't just look indecisive, he looked absolutely lost. The team just went out of their way to make mistakes, turn the ball over, and generally play as awful as they could.

They won? Yes. Against Towson. A team that lost to Kent St by 20. LSU never put distance between themselves and an FCS team. And because of that, JC Copeland was in the game in the fourth quarter to get injured. Just f'n great.

There was just nothing good about this game. Absolutely nothing. I am just too angry to say anything coherent right now. This game sucked. We played like ass. And to top everything else off, the band played a Lady Gaga song.

Seriously. Screw you, TGBFTL. You made a crappy night somehow crappier. I hope none of you get laid tonight. I hate all of you.

-- Three fumbles. All recovered by the opposing defense. Sure, that's bad fumble luck, but take care of the damn ball.

-- Russell Shepard was LSU's leading rusher. I will let that stand without comment.

-- LSU did completely outperform Towson in the punt game. Which isn't a surprise, but Towson really had some terrible special teams in this game.

-- I'm too mad to continue typing. This post is sponsored by half a bottle of Ardbeg. I don't know where we go from here. But this was unacceptable.