Thoughts From The South Endzone: Playing It Safe After A Long Week

Share All sharing options for: Thoughts From The South Endzone: Playing It Safe After A Long Week 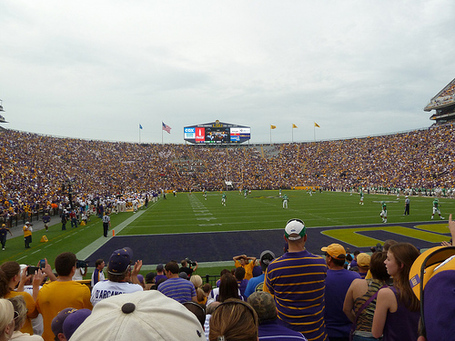 Ah yes, the grand return of my weekly photoblog of Death Valley happenings, halftime show critiques, and the opinions of the common men and women from the not-so-cheap seats in the southwest corner. As always, photos (and videos) in this post were taken by me and you can see the full gallery HERE.

The mood of the campus could best be described as subdued, with the normally vibrant tailgating scene noticeably scaled back, and with good reason. Even as we speak there are many in the state still without power and much of the area around Laplace is still under water. Further still, an oppressively hot and muggy day worked to suck the life out most who showed. Even the Baton Rouge locals, including many who had left homes that had just gotten their power and AC back, were taxed like a team that had been lax in it's summer conditioning. There were a few who overdid it on the first day, including a gentleman I saw pass out where he stood while waiting for the band to come down the hill. It's cliche to say it after a hurricane, but the state needed a break, not a party, and just relaxing around a grill with good friends and cold beer is enough to recharge the batteries.

Not that we didn't try to have a little fun... 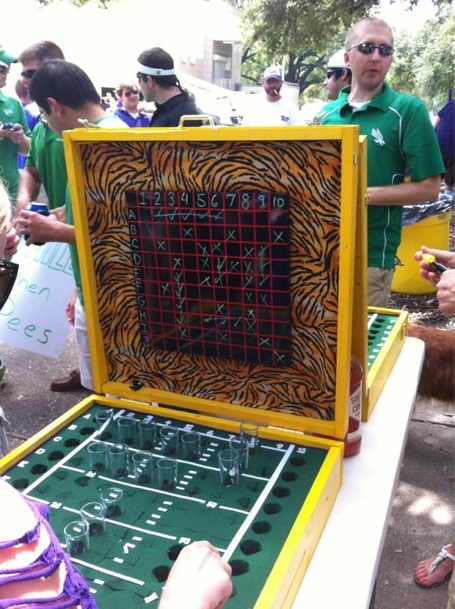 I give you Battleshots, the latest development in creative alcohol consumption. Played with Bacardi and Southern Comfort Hurricane mixers and played in teams of three (or one-on-one if you only want to play one round), it was a huge hit this weekend and attracted a not small contingent of Mean Green fans who gazed in wonderment at the creation. I am positive this game will make me make bad decisions later this year, which means it is the perfect addition to any tailgate. 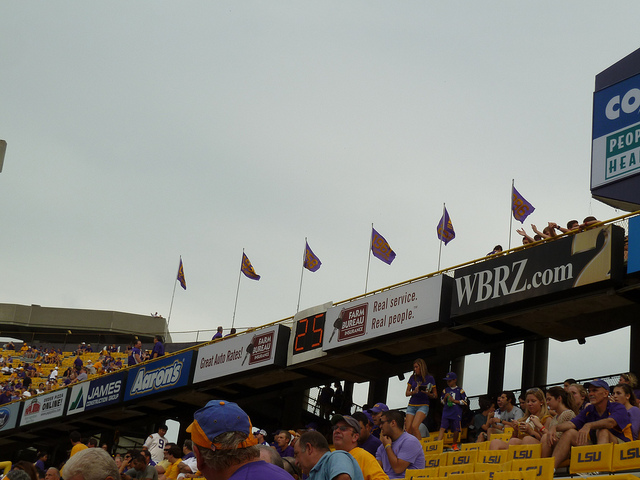 The SEC Championship flags in the South End are nice, and a simpler solution than adding two more flagpoles for the new SEC teams, especially since the South End will be vastly different after the coming expansion. 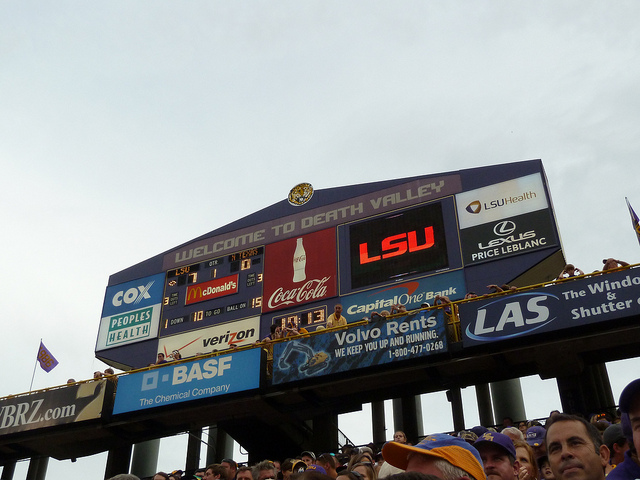 The South Endzone scoreboard had been damaged in the storm, and along with missing the banner that covers it's back, the video portion was inoperable. LSU says they hope to get it fixed for next week, but I don't expect them to spend to many resources on it since the whole board will be gone in the expansion. This is also the only place in the stadium where the "Welcome to Death Valley" sign still stands and I hope it can find it's way back next year. 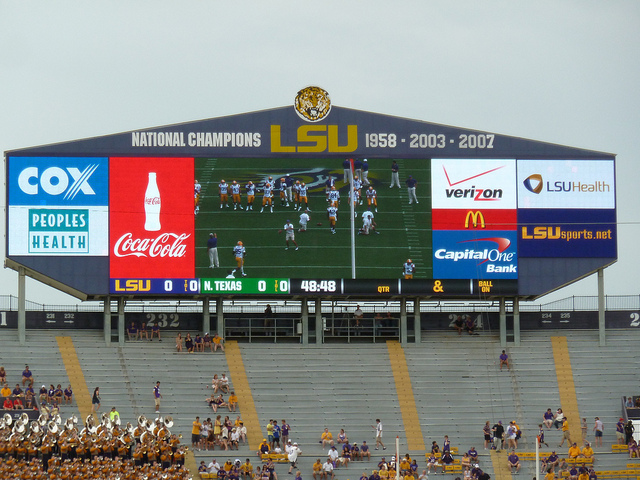 The North Board was fine and I liked the way they changed the layout on the bottom line this season. What still kills me is that all this money was spent on an huge HD video board that displays static ads on more that 50% of it's surface for 90% of the time. If that's all we are going to do with it, they could have saved a lot of money and just bought permanent signs. 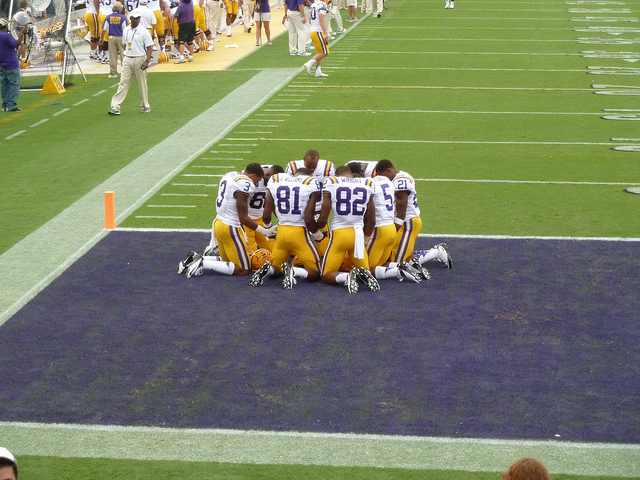 For a few years now, the receivers group has come to this spot and taken a knee for prayer right before kickoff, usually solemnly. This year Russell Shepard is leading the prayer and was quite animated and vocal. I like to see that kind of upperclassmen leadership and I think it looks good for a guy who nearly left early last year and knows what he needs to accomplish this season. 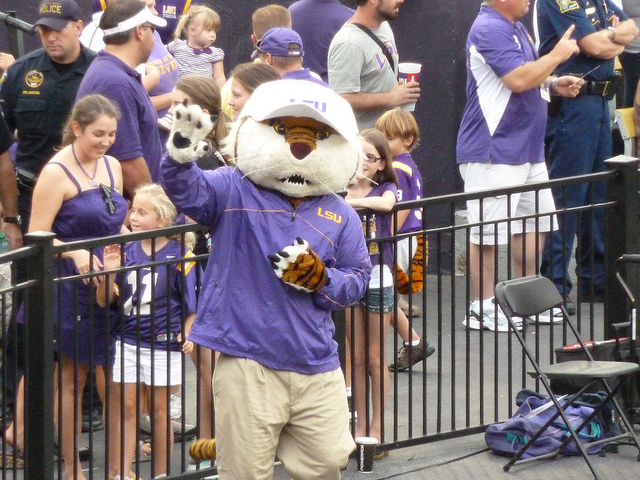 Mike in a Les Miles costume 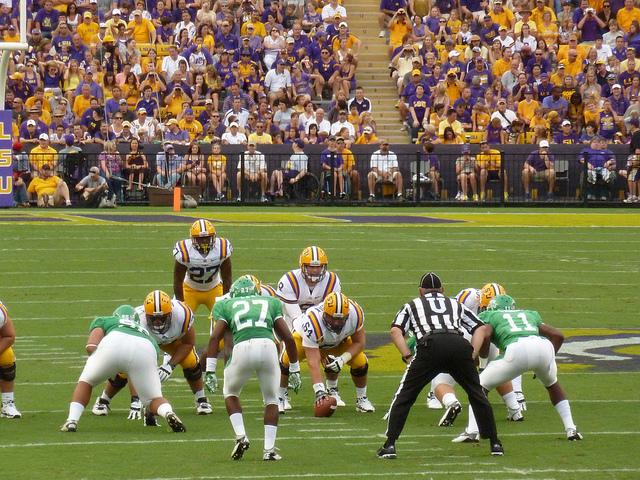 Mettenberger under center was what we all came to see, and the first drive could not have gone any better. 3rd and 1, with an overflowing stable of top quality running backs and LSU goes to the air for 19 yds to Jarvis Landry and the first down, surprising everyone. Of course, it was immediately followed by a Kenny Hilliard TD run, as if to say "yeah we can do that whole passing thing, but these RBs are still going to be the main production" The sloppy play (10 penalties for 55 yards and 2 negated TDs) was what really surprised me, but given the crazy week and missed practices due to Isaac, it is something I believe will get cleared up quick this week. 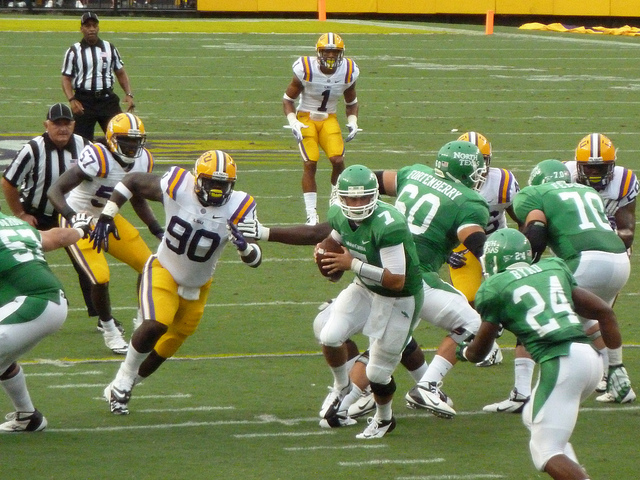 I was surprised that the D managed no sacks, but holding a decent Sun Belt team to under 100 yds rushing and less than 10 first downs is something to be proud of, even if it didn't look impressive at the time. Yeah, we got burned on that 80 yarder, but it's not like we are going to stop trusting Eric Reid. Chalk it up to the "Program Cover Curse" and move on. 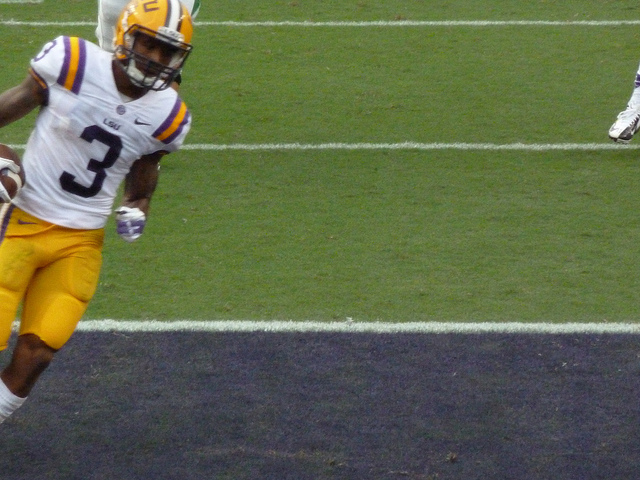 ODB Jr did great in his first outing as the lead returner, and while I'd like to see how he develops against stiffer competition, he is just as exciting to watch as TM7 was. Also on ST, I was surprised to hear Jarvis Landry's name called on a few tackles. He must really like hitting people. The backup Aussie (who even Dan Borne' didn't realize was in until the 2nd punt) was decent, and showed great skill on the botched snap, but I'll be glad when we get Wing back. 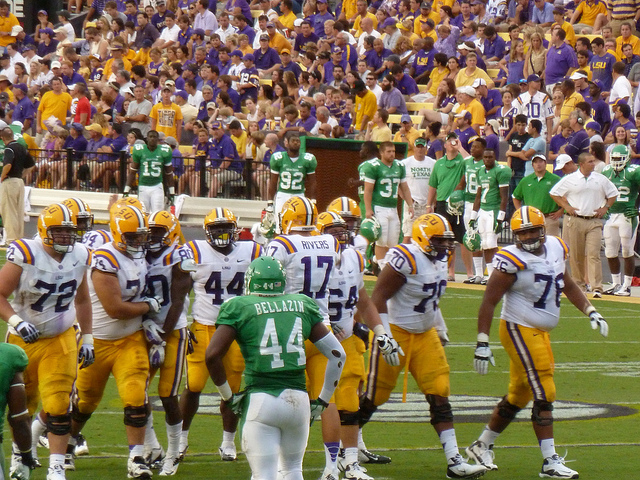 Not exactly how we thought the Stephen Rivers era would begin, but his split time with Mettenbeger was decent, if very conservative. After that big hit, the protection offense was evident for the rest of the half, even after Mettenberger came back. Once it became obvious that LSU wasn't going to be risking anything else, the crowd knew what was up and decided they'd had enough of the heat. Which is why it looked like this about 5 minutes into the 3rd. 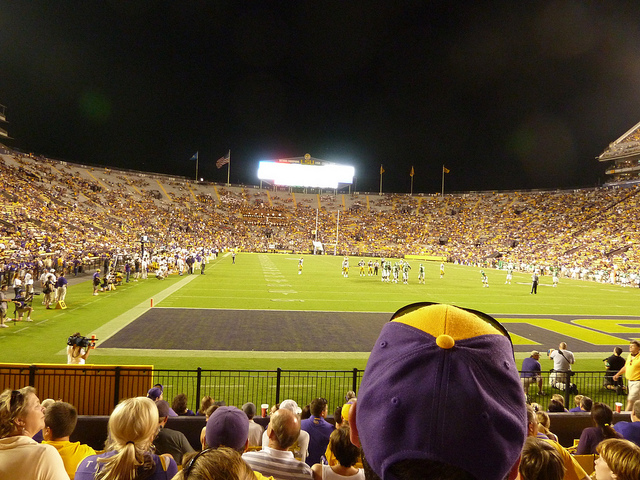 One more note about the stadium experience. Much press was made last week about how the SEC was allowing replays to be shown during official reviews, but it didn't happen this weekend. I've heard that there were technical issues, but that's bunk. Specifically, after Eric Reid's interception in the 2nd Q, a replay of the catch was shown before the review was called for. Then, when the play was being reviewed, we got this. 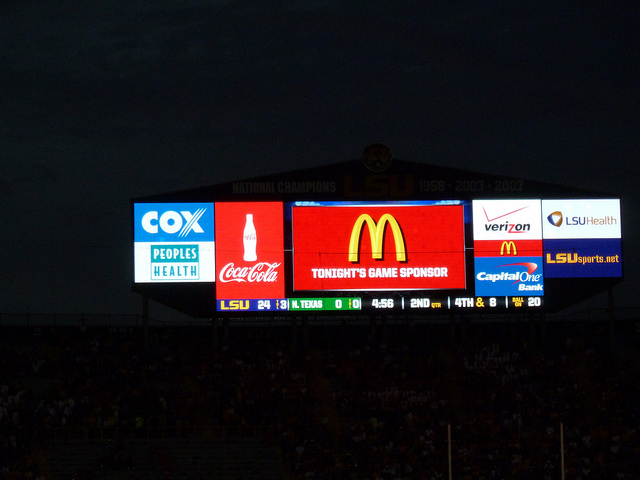 I hope they get the changes in for next week, because it was frustrating not seeing the plays during a review. 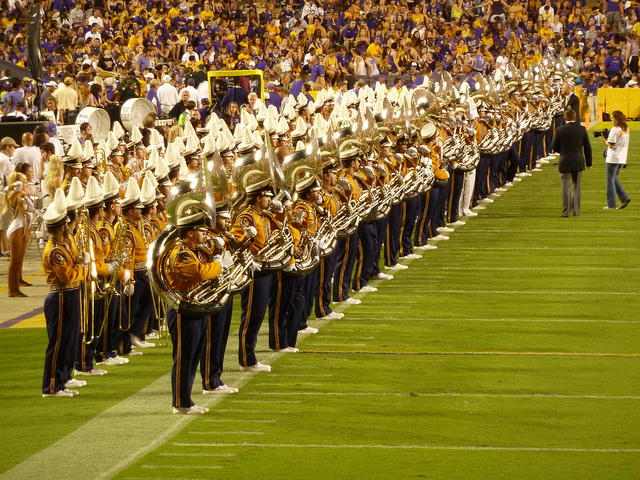 A nice, if safe, Disco show, but not bad for a first week that was messed up by a hurricane. No Neck, but no real reason for it. New addition of "Moves like Jagger" wasn't as bad as I thought it might be, but I fear the Pitbull number that I know is coming. Winds section has dwindled significantly, but you still hear them when you expect to. Sound was great in the stands, but the creep of piped in music continues at an alarming pace. Do we REALLY NEED a few minutes of the Doobie Brothers during a timeout? Talk about a mood killer. 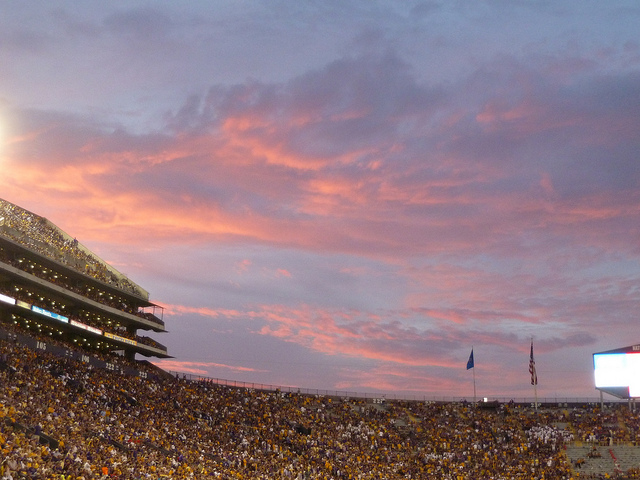