For a long time, a big part of conventional football thinking centered around the idea that when you passed, three things could happen, and two of them were bad -- an incompletion or interception. And while there's some truth to that, you could easily say the same thing about running plays: a positive gain, no gain or a loss, or a fumble.

In the 1960s, more and more coaches began to move away from that wisdom. Mostly because they had to if they wanted to win. Don Coryell at San Diego State. Tiger Ellison in Middletown, Ohio and Mouse Davis at Portland State. By 1970, Bill Walsh was developing his own slant on the passing game he picked up from people like Sid Gillman and Al Davis. Two years later, Lavell Edwards would become the head coach at Brigham Young University, and decided to build a staff that would be best equipped to use the talent he had available, and pass the ball. Over the next 28 years, his staffs would feature names like Norm Chow, Mike Holmgren, Andy Reid and Brian Billick; his offense would be the primary influence in what would become the "Air Raid" offense of Hal Mumme and Mike Leach; and would produce a litany of star college and pro quarterbacks, including Robbie Bosco, Jim McMahon, Steve Young, Ty Detmer and Steve Sarkisian.

That's right, Washington's coach was a heck of a college passer in his own right, throwing for 33 touchdowns and leading the nation in pass efficiency in 1996. Five years later, he would join his former QB coach and coordinator, Chow, on the offensive at USC, eventually moving into the OC slot in 2007.

The thought process of all of these coaches was fairly simple: there's no reason that a well-taught and well-executed short passing game couldn't be every bit as effective as the run. A four-yard completion on first down was just as valuable as a four-yard run. Passes like the drag (called "scat" by the BYU staff), the slant and the stick, taught with simple reads, adjustments and constraints to pounce on any defensive cheating to take them away. An offense that can take what the defense gives to it, yet still attack specific areas of the field. To quote Chow from an old AFCA presentation:

We'd be lying if we said we sat up in the box and knew what coverages were being run. What we try to do is take a portion of the football field, the weak flat for example, and we will attack that until we can figure out what the defense's intentions are. Then we try to attack the coverage that we see. It is very difficult to cover the whole field. We are not going to try to fool anybody. We are going to take little portions of the field and try to attack them until the defense declares what it intends to do.

H/T to BruinsNation for the link.

Chow, and Sarkisian, are also not afraid to keep things simple for their quarterback (I know, right? Shocking!), by isolating one side of the field to read on a play. And presenting those reads to his quarterback in the same way that he might view a zone-read -- if A, do B, or if B, do A, based on a particular player. Take for example the double-slant concept: 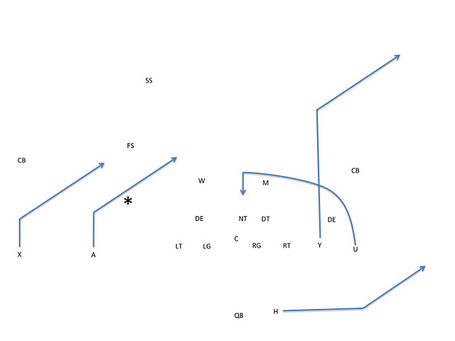 The inside receiver's job is to attack the inside shoulder of the man heads up on him. If he gets underneath him, the quarterback throws it to him. If the defender gets underneath the inside receiver, it creates a throwing lane to the second slant. That's it. There's no progression here, just one simple read that should work regardless of what the rest of the defense is doing. The QB won't even look at the other side of the field. If neither slant is open he will either throw his protection, or take off and run. Simple, and when you have the athletes USC had at receiver in the middle part of the last decade, it's devastatingly effective.

Sark talks a lot about his quarterbacks "playing catch," and it shows. Some of the other concepts Sarkisian favors were covered this spring in the passing game prospectus: middle-vertical stretches, oblique stretches and the two-man game, all of which are designed limit the quarterback's read to what one or two particular defenders do. Keep it simple, and limit a quarterback's responsibility while maximizing his effectiveness. That's to say nothing of the ways Washington has found to use mega-talented tight end Austin Seferian-Jenkins, which we will cover on Friday.

In his fourth year in Seattle, Sarkisian appears to be building his program the right way, similarly to Dan Mullen at Mississippi State. His teams have gotten a little better every year, even if the records don't reflect it. The Huskies have slowly been building talent and found an offensive system that replaced a first-round QB talent with a former three-star prospect in Keith Price with no drop-off.