Share All sharing options for: LSU Holds Off Late Charge to Upset Mizzou 73-70

On Wednesday night, LSU faced a ranked opponent for only the second time all season. Considering the first match-up resulted in a 22 point home loss to Florida, expectations for an upset were not particularly high in Baton Rouge.

But a little after 9:00 pm local time, LSU shocked the SEC, knocking off #17 Missouri, which dropped to 15-5 (4-3 in conference play). LSU started the game hot, pushing out to a 17-6 lead in the first 6 minutes of the game. From that point on, the Tigers were in control for the rest of the first half.

Buoyed by the clutch shooting of Andre Stringer (18 points, 4-5 from downtown), the Tigers stretched their lead to 16 points before heading to the locker room with a 39-26 lead. On the other hand, Missouri had an abysmal first half, making fewer than 30 percent of their shots from the field.

At the start of the second half, Mizzou made a comeback. They cut the lead to 4 points (46-42) in the opening minutes, as dynamic point guard Phil Pressey put up 6 of his game high 25 points and Jabari Brown rediscovered his outside touch. For the first time all game, LSU fans had reason to worry. Not only was LSU in danger of falling behind in the game for the first time, but Missouri was beginning to assert their fast-paced offensive game, scoring in transition and not resorting to contested jumpers.

However, Johnny Jones was able to get his players to regroup. Soon after his timeout, LSU had again stretched the lead to double digits. In the final 4 minutes, Mizzou mounted another comeback, cutting the lead to a single possession on several occasions. However, LSU had answers each time.

Stringer buried another three and made some clutch free throws, Anthony Hickey (20 points, 4 assists) and Johnny O'Bryant (14 points, 11 rebounds, which was good for his 4th straight double-double) scored key baskets, and Missouri could not cut the lead past 2 points.

In the end, only some poor free throw shooting from the usually reliable Shavon Coleman kept the game closer than it needed to be.

But ultimately, those misses didn't matter. LSU pulled off the upset, 73-70, to mark the first marquee win of the Johnny Jones era. With their first win over a ranked team all season, LSU improved to 11-7 on the season and 2-5 in conference play.

Next up, the Tigers travel to Starkville on Saturday for a very winnable road game at 4:30. 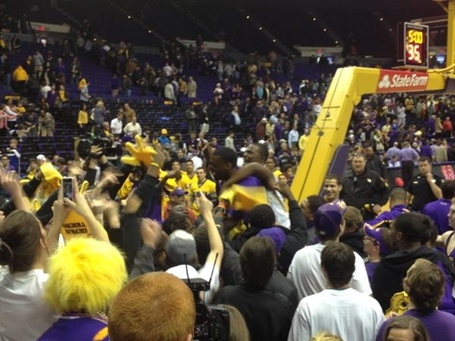 That would be Jalen Courtney and Andre Stringer thanking the student section/football players after the big upset.lockerz.com/s/280448485

Anthony "Freak" Johnson, along with many other football players, led the student section.