A little late this week, but let's take one last look at the previous weekend through your favorite metric: the ATVSQBPI! 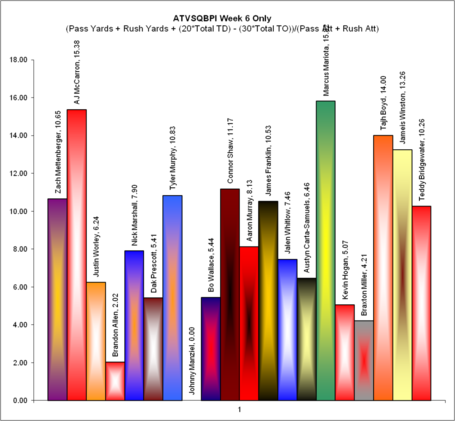 There's nothing more fun than guys breaking the scale by playing hapless opponents. McCarron clearing 15 last week means a lot less when you realize he did it against Georgia St. OK, technically Colorado and Syracuse are BCS conference teams, so Mariota and Boyd get some credit for treating them like a piñata, but only a little bit. Free candy for everyone.

Here's a quick reminder that Maryland was technically a top 25 team, so Jameis Winston's numbers are downright insane. That shouldn't be legal.

What is interesting is how poorly Braxton Miller rated last week. Ohio St. got what might be their biggest win of the year, giving a boost to Miller's Heisman candidacy, yet his numbers could charitably be described as pedestrian. Hogan also had a down week, but he also led Stanford to a big win over a conference rivals. It's not fair or even entirely logical, but we tend to rate QB's by wins, and both of those guys got huge wins. 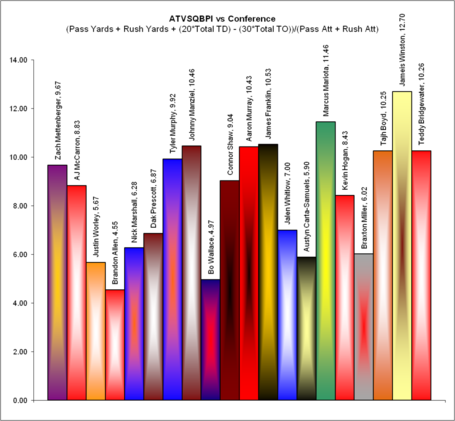 We're getting to the point where it is more helpful to look at the ATVSQBPI by conference only numbers instead of the season numbers, just so we can exclude all of those blowouts against paycheck games. However, due to the switch to just conference games, it actually makes Jameis Winston's numbers go up. Thanks for nothing, Maryland.

The Heisman contenders, save Braxton, all look great. Mariota, Bridgewater, Boyd, and Winston all have an ATVSQBPI in conference play over 10. That means they are worth a first down pretty much every time they touch the ball, on average. That's tough to beat. It's still early, so people can see their numbers come crashing back to earth, but they are leading the field.

Turning to the SEC, it's shocking to see how many quarterbacks are performing at an elite level. Three QB's are above the 10.0 threshold (Murray, Manziel, and Franklin) and another three are above 9.0 (Mettenberger, Shaw, and Murphy). AJ McCarron has a 8.83 rating and only ranks seventh in the SEC. That's just an amazing turnaround for a conference not exactly known for offensive fireworks. It's nice to see Mettenberger flirting with the elite, but it's even more shocking to see James Franklin up there, as well as Tyler Murphy, who wasn't even a starter three weeks ago. Murphy's sudden emergence puts them back in play for the SEC title. 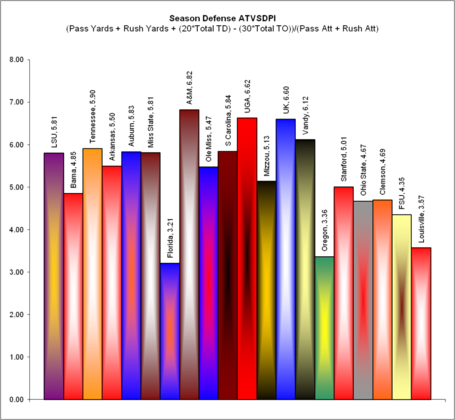 Only Florida is carrying the flag for the SEC this year, and maybe Alabama as we all agree to pretend the A&M game never happened. The out of conference teams we track, we chose not for the defensive prowess, but for their quarterback play. However, each one of the teams we track is crushing the average SEC team in defensive performance. We're just not used to seeing this.

That said, it's not like the defenses are horrible, it's just a lack of great ones. Only four SEC schools have a ATVSDPI over 6.0, and A&M's 6.82 is the SEC's worst. That's bad, but it's not hide the children bad. It seems most defenses are clustered right around that 6.0 mark, but most are hovering on the correct side of it, like LSU at 5.81. The defenses are at least playing well enough to give those QB's a chance to win the game for them.

*Programming note: ORtiger, who makes all of these cool tables, will be unavailable this weekend. So no ATVSQBPI next week. We will make it up to you by including Baylor on the chart going forward, because I want to see if we can break the scale.