LSU vs. Ole Miss: What to Watch For

LSU begins the second half of the 2013 season with a trip up to Oxford to take on Ole Miss.

Share All sharing options for: LSU vs. Ole Miss: What to Watch For

Oh look -- it's the greatest metaphor for Ole Miss...well...ever.

Hack off a limb. Knock a Manning on his ass. Watch them lose to Jacksonville State. Doesn't matter. Ole Miss always seems to come back, pesky as ever.

LSU has won 11 out of the last 14 games in this series, and seven out of the last 10 played in Oxford. But to the Runts' credit, few of them have truly been easy. I mean sure, there was that mercy smothering last time the Tigers went up there in 2011, but it's been a tight game the last few years. And even at half-strength, I expect Ole Miss to throw everything they have into this game.

LSU is their Super Bowl, every year, and if they could somehow spring this upset, it would not only make their year, but earn Hugh Freeze a ton of goodwill. Something that he could use if he wants to keep squabbling with fans after tight losses.

Ole Miss has an experienced quarterback, a couple of explosive playmakers and runs an offense that has given the Tigers problems at times in recent seasons. With just this game and Furman between LSU and the big final stretch of this season, it's important to take care of business and get out of this game with as little wear-and-tear as possible.

One Limb at a Time

The whole Black Knight video works as a metaphor for a lot of the same reasons it works as a joke.

For one, this is one banged-up team right now. As many as six starters may miss this game on the defensive side of the ball, and the offensive side's most consistent offensive threat (Jeff Scott) and best change-up pitch (backup quarterback Barry Brunetti) will be limited if they do play.

But for another, hacking off limbs also kinds of describes defending Ole Miss' version of the hurry-up, no-huddle spread offense, and one of their staples, the packaged concept.

Packaging play concepts is not really a new thing, but it's one that has become increasingly popular in the modern spread attack. In short, it's combining two plays in a way that allows the quarterback to pick and choose between them in real-time action. Bill Walsh kind of originated this style by combining three- and five-step pass concepts into one play, with the routes on either side of the formation and allowing the quarterback to choose the best one and set the protection pre-snap. Later, Rich Rodriguez combined the classic trips-formation bubble screen in with his zone-read plays at West Virginia.

It's been adapted by smart offensive coaches across the country, from Urban Meyer to Chip Kelly (now Mark Helfrich) to Kevin Sumlin to Dana Holgorsen to Brian Kelly. It's even begun to work its way into the NFL with teams like the Buffalo Bills, San Francisco 49ers, Seattle Seahawks and Green Bay Packers.

One of the more common iterations currently is the "stick/draw" concept. 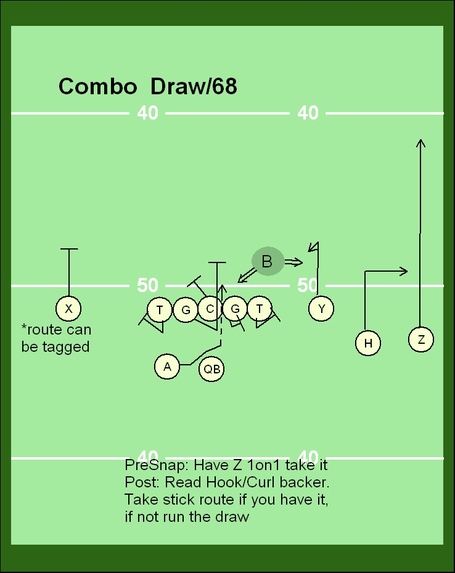 It shouldn't look completely unfamiliar if you've read some of my previous works. It combines the basic draw play with the popular Y-Stick passing concept. In short, the quarterback, at the snap, will read a single defender (likely the strong-side linebacker) and either hand the ball off if he's dropping into coverage, or throw the stick route if he's blitzing or reading run.

And there are other variants, like the aforementioned zone-read/bubble 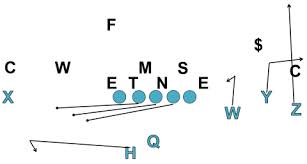 or even this zone-read "quadruple option" play that the Buffalo Bills have adopted for E.J. Manuel. 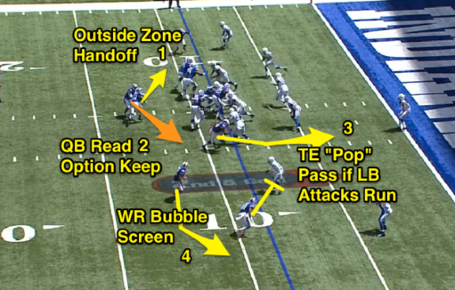 Quarterback can hand off, keep, throw the quick bubble or, if the defense is overplaying, hit the TE on that quick "pop" route. The kind of route that won't gain much if the defense is looking for it, but if the linebackers are sucked up by the zone-read that tight end will find himself with a lot of room.

Packaged concepts are perfect for hurry-up spread teams because it allows them to essentially take one play and run it into the ground. Over and over again, with the defense rarely seeing the same result twice. The pass routes are typically quick-hitters, so the ball will come out before the offensive line can get down the field and draw a penalty, and if the quarterback is smart he can simply take whatever the defense gives him.

So, as a defense, you have to decide what you're willing to give.

As complex as it may seem, defending all of this isn't exactly rocket surgery. Win the line of scrimmage, maintain gap discipline and swarm to the football. Mix up pre-snap looks and see if the quarterback makes a mistake. Decide where you want the ball going, and try to funnel it that way.

Hack each limb off, until the Knight is just a stump.

You know, I'm starting to suspect Dr. Bo can't even write a prescription.

Since the hot start against Vanderbilt and Texas, Ole Miss has averaged just 24 points a game in conference play. Despite a pace second only to Texas A&M -- 76 plays a game -- the Rebs have averaged just 5.69 yards per play. Just four tenths of a yard ahead of Florida.

A lack of explosive plays (just 90 over 10 yards this season -- ninth in the league) and an inability to stay ahead of the chains (46 of 88 third-down plays or 7 yards or longer) have been the main culprits. Ole Miss averages all of 6.8 yards per attempt in the passing game. That's not only in the league's bottom quarter; it's the lowest figure of any team that has thrown it more than 180 times this season. This offense makes a living on short crossing routes, hitches and screen/swing passes, and despite some speedy guys like the aforementioned Scott, Donte Moncrief, I'Tavius Mathers and Laquon Treadwell, defenses have been swarming and making tackles. Wallace seems to be making better decisions, but he just can't push the ball down the field. Maybe that's a side effect to his offseason shoulder surgery, but it's definitely held this group back.

If this Tiger defense can match last week's intensity, swarm to the ball and get some push at the line, they can keep the Runts in third and long. This is a team that's converting just 40 percent of their third downs, and that number plummets as the yardage increases.

If Wallace does have a gift, it's for the option side of Ole Miss' offense. He's proof that you don't necessarily have to be all that fast to be a good option quarterback. Just understand the reads of the play, be it a typical option or a read play, and execute. The guy always seems to make the right call on the zone-read or inverted veer, and pulls the ball out just in time to pick up whatever yardage the defense allows.

Back on the Horse

Look, watching LSU dribble left-handed last week and grind out Florida was encouraging. But just the same, I'd rather watch this offense resume setting the SEC ablaze this week.

Ole Miss has a solid defense. A fast, aggressive 4-2-5 unit that thrives on man coverage and pressure. That's the kind of defense that LSU has shredded this season, and that's before we even talk about the serious injuries to the front and one of the top corners in Mike Hilton.

Plus, this is an outfit allowing 180 yards a game on the ground. Run Jeremy Hill and the other backs, use play-action, and turn Odell Beckham Jr. and Jarvis Landry lose.

What would be really fun, would be to see if this offense can dribble with both hands. Mix in the big plays with a couple of long, slow, double-digit play drives that shorten the game, break Ole Miss' will and help make sure that this new-found defensive confidence is protected.

One of the more interesting sub-plots to this game will be the play of this LSU defense. Did they turn a corner last weekend, or just have a hot day against an overwhelmed offense?

Don't be surprised if it was the latter. Especially against this group. The thing about the hurry-up/no-huddle spread is that when it rains, it pours. Once they really get moving it gets even more difficult to stop. And it's been a style that has given the Tigers some trouble. Wallace isn't having as good a year as many expected, but he's still a veteran quarterback that knows what he's doing, and he has playmakers. Moncrief is a stud, and Treadwell certainly has that potential. Scott might not play, but he's always given LSU trouble the last few seasons.

Ole Miss will, more than likely, move the ball here and score some points. If LSU can, at a minimum, replicate the hustle, attitude and tackling ability they showed last weekend, that will result in enough big plays to help the offense build a nice lead and make the Rebels a little more one-dimensional.

I'm not saying that this game will be a complete shoot-out, but the Runts will probably get a few rounds off and frustrate Tiger fans. Defensive issues like we saw in the first few weeks don't tend to evaporate in one week. Hopefully, the improvement continues.

But this won't be a shutout.