The quarterbacks continue to dominate

ATVSQBPI took the last two weeks off because there’s only so many ways to say that we shouldn’t pay any attention to these numbers because no one is playing a live defense. Last weekend was the first time that a majority of teams actually played somebody with a pulse, so the numbers were finally a bit more meaningful. So let’s dive in, shall we? 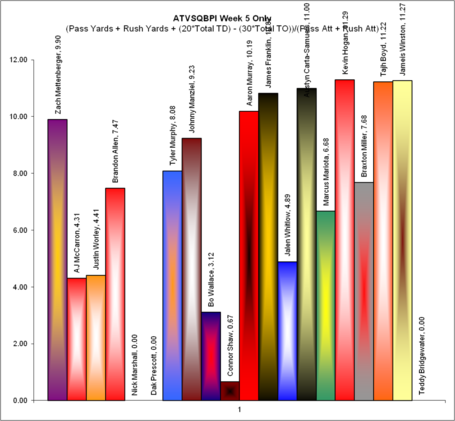 Zach Mettenberger just missed out on that 10.0. He would’ve had it, too, had it not been for a disastrous two minute drill to close the game. In the battle of awesome QB’s, Aaron Murray came out slightly ahead. Normally when you see scores that big, it is in a massive blowout or against a terrible defense, but this was two great quarterbacks having singularly great games on national TV. Let’s give credit. That was an awesome game with some spectacular QB play.

Our ACC pairing still leads the nation, as they both got a chance to tear apart the weak sisters of their own conference. Winston started sluggish against BC before finally remembering where he put that can of whoop ass, and Boyd was consistently excellent against an outmatched Wake Forest team. This was a week where the quarterbacks started to show that their numbers weren’t just a reflection of playing lousy teams, they really are this good. There’s an excellent class of quarterbacks in college football right now. 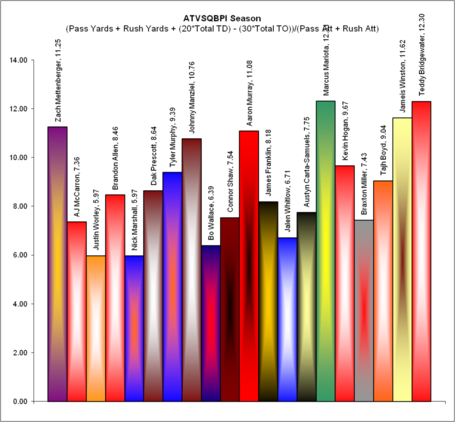 See? Look, how they have done all year long. You will note that Mettenberger has the highest ATVSQBPI of any SEC quarterback, even over Murray and Manziel. Now, Murray has played the most brutal schedule, but after a full month of football, it’s shocking to see LSU leading anyone in a passing category.

I’ve pointed out how good the ACC quarterbacks are, so let’s spread some love to the Pac-12. Mariota and Hogan are both putting together massive seasons, though Hogan’s might be quietly better. Mariota had a modest game against Cal, and outside of the Tennessee game, he’s been more dependent on the run than the pass to prop up his numbers (he had 235 yards rushing on nine carries in the two prior games). Hogan has decent mobility, but he is torching teams through the air. He’s just been so consistent, as his lowest rating was a 8.8 against San Jose St. He just hews so close to that 9.0 number every week. Consistency is a hard thing to truly measure, but he seems to have it. How excited am I for the Stanford-Oregon game this year? 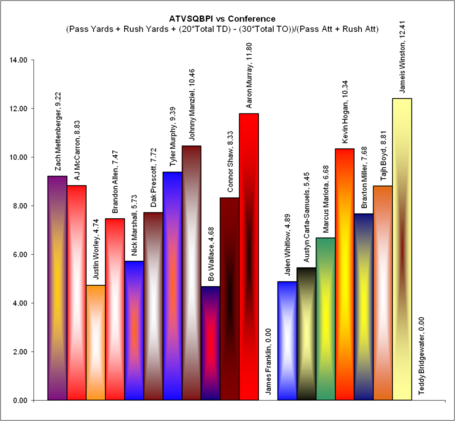 When we look at how players have performed against the conference, we see Murray rise to the cream of the crop. It throws out his Clemson game while everyone else loses their games against Directional State. The only guy who can keep pace is Winston, and he got to play Boston College.

What is shocking here is how well Tyler Murphy played for Florida. It’s just one and half games, both against bottom dwellers, but it is a nice bounceback for Florida. They need some QB play. Also, note how poorly Mariota and Braxton Miller fare when only looking at conference games. Still good numbers, but no longer transcendent. Both are being pushed as Heisman front runners, but you have to perform in tough games. Neither has just yet. They are piling up numbers against tomato cans or, as we call it, the Terry Bridgewater Method.

Let’s look at the defenses… 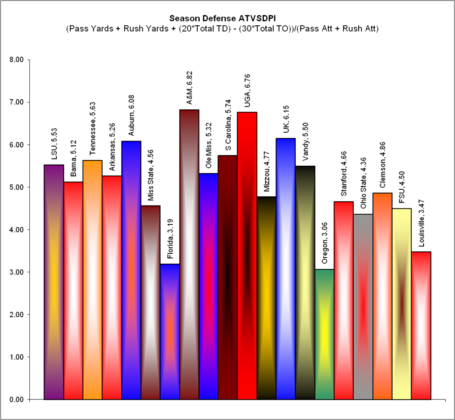 Not as bad as you thought, right? A&M and Georgia still set the standard for anemic defenses, but LSU’s defense doesn’t rate horribly. Florida and Oregon are very bit as awesome as you thought they would be, but LSU is hanging out with Bama near the middle of the pack. What’s going on here?

LSU and Alabama would both blame a huge outlier. Alabama’s defense had an ATVSDPI of 9.72 against A&M. Without it, they’d be at 3.31. LSU went for 8.29 against Georgia, and would have a 4.82 without it. Neither has had an ATVSDPI above 5.0 in any other game. Alabama’s defense appears to be the better unit, which just got mauled by A&M, while LSU seems to have a good not great defense that got lit on fire by Aaron Murray. Neither team should panic yet, but neither has the elite defense they are used to having.

This is the year of the quarterback. Sit back and enjoy it.