Or how some Tigers can ruin everything

Share All sharing options for: Johnny Football, ATVSQBPI, and the Heisman Race

I haven't written many ATVSQBPI's this year for a lot of reasons, but we'll go with the fact that I've been real busy this football season and its pretty much the first thing on my wish list that gets dropped. Do not think that ORtigerfan has been slacking on the job, as he has been dutifully been compiling the data every week that I have studiously ignored.

But given that it is now Texas A&M week, let's bust out the old ATVSQBPI metric to tell you what you already know: Johnny Manziel is pretty darn good. 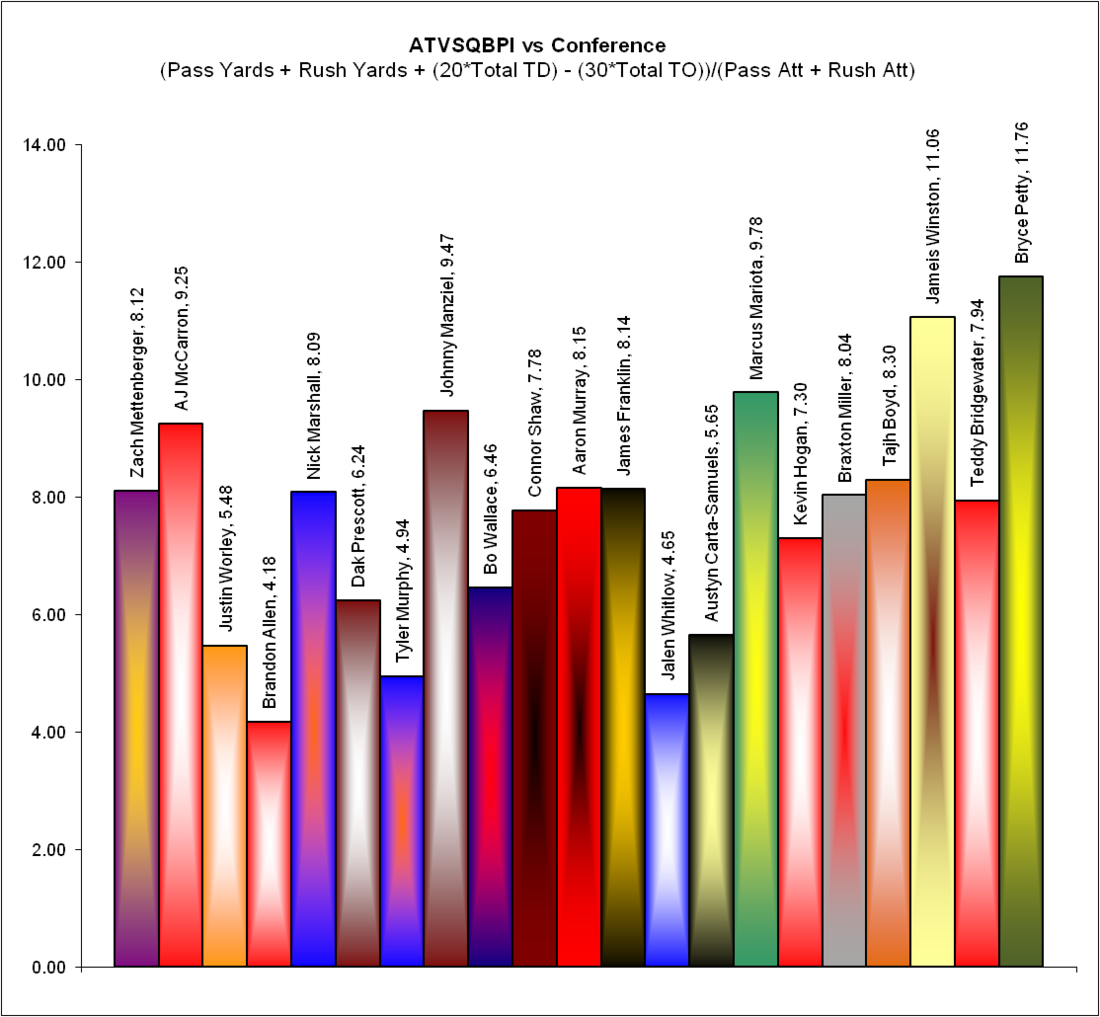 Looking at the Conference Only numbers, only three quarterbacks we are tracking have a higher rate of performance: Bryce Petty, Jameis Winston, and Marcus Mariota. By any standard or any metric you prefer to use, Johnny Football has been performing at an elite level and is worthy of winning the Heisman Trophy again, if he holds up this level of performance.

And let's be honest, Mariota lost any hope of winning the Heisman when he decided to have his worst game of the season against Stanford. Look, it may not be fair, but you can't win the Player of the Year award when you save your worst game for the biggest stage.

So honestly, Manziel's only real competition is Winston and Petty. Petty is likely hurt by the fact RGIII just won the Heisman and get this, he's surrounded by playmakers at Baylor. Yeah, that's right, the sheer awesomeness of friggin' Baylor will likely be held against him. We are through the looking glass, people. Though there will be some bias that Petty is a "system" quarterback and that any pretty talented guy could put up big numbers in Briles' offense.

Which means that the voters looking for an excuse to not give Johnny Football a second Heisman Trophy will likely rally behind Famous Jameis. His one "bad" game was a 5.58 ATVSQBPI against Wake Forest, a game that FSU won by about a billion points. Give or take. OK, he wasn't All-World against Miami, but when 324 yards and 1 TD is considered a step back, you know you're having an awesome year.

Manziel hasn't been quite as spectacularly consistent, though he has continued to make highlight reel plays through his biggest strength and weakness: the kid has no fear. This means he can make spectacular plays, but it also means he is prone to jaw dropping turnovers. Manziel doesn't know how to play it safe, which makes him great, but it also makes him vulnerable.

Of course, if he's to win a second Heisman, he needs another marquee game to remind people that, yes, he is awesome. That means he needs to put up a big number against both of the Tiger teams he will be playing. Can they stop him? 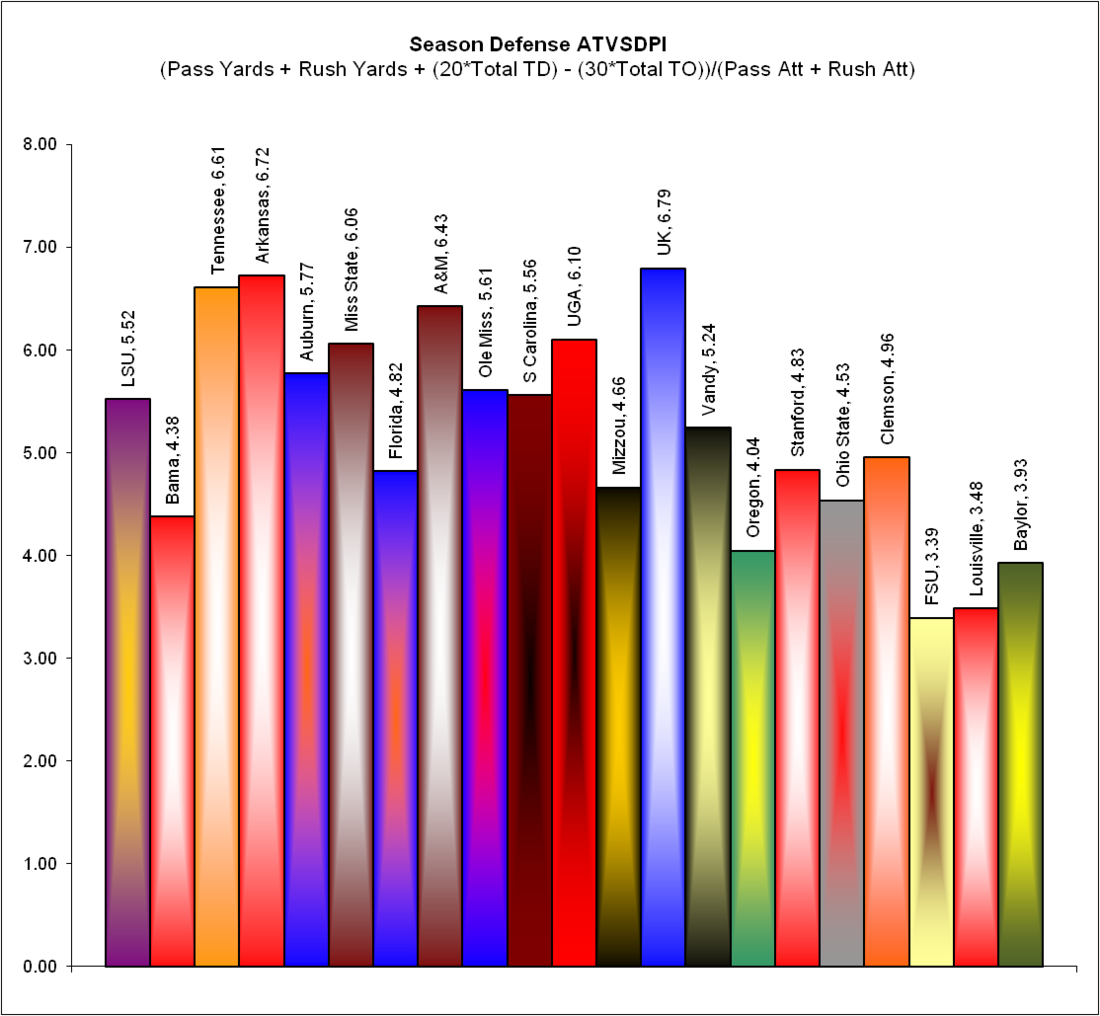 For all of the hand-wringing around these parts, LSU's defense has not been bad, it just hasn't been great. We're used to great and so we tend to think of a normal defense as unimaginably terrible, but LSU actually has one of the top defenses in the country, rated on the modified yard per play system of ATVSDPI.

Mizzou has an even better defense than LSU, and has been playing nearly at the elite level of Alabama and Florida. That's two straight weeks in which Manziel will face a stiff test, more than enough to rally Heisman voters back to his side. If Manziel wishes to become only the second two-time Heisman winner, he needs two consecutive big games to do it. It is up to LSU to ruin A&M's dream. Also, I should mention, we have a pretty good quarterback, too.

But no one wants to be on the Heisman clip reel for eternity. It's time for the LSU defense to show some pride and make sure they are not the guy getting posterized.