LSU Versus Alabama: What to Watch For

If the rest of America doesn't mind, the Tigers DO plan on showing up Saturday.

Share All sharing options for: LSU Versus Alabama: What to Watch For

Yeah, I used this video last year. So what?

We believe in Delusional Optimism here. But there is not one delusional thing about believing that the Tigers can win this game, and I'm kind of stunned at the level of Pathetic Pessimism that is out and about in Baton Rouge is ridiculous.

LSU might not win this game, but they damn sure CAN, and I would be stunned by anything less than a close game. The team that either makes more big plays or fewer mistakes will win it, and I honestly cannot understand how anybody would say that the Tigers have no shot. A 2008 team with a freshman quarterback in over his head, a coaching staff that didn't know how to protect him and a team that was in the process of quitting on him, took Alabama to overtime in 2008. A 2009 team with a terrible offense that was banged up to boot took a lead into the fourth quarter versus the eventual national champions. Even last year, with an offense that had looked much, much worse than this year's group, LSU not only took the fight to Alabama but took them down to the final minute. And yeah, all of those were gut-wrenching losses that unleashed seemingly endless amounts of rage for one reason or another.

But that doesn't mean LSU can't win this game.

Alabama deserves to be favorite in this game, but this isn't the 2011 or 2009 squad. The Tide aren't nearly as impressive on paper, or on film, as either of those two teams. They have seen all of two ranked opponents all year, and some of the worst offenses in all of college football. Virginia Tech, Arkansas, Georgia State, Tennessee, Kentucky -- the highest ranked total offense out of that group is 97th. Out of 125 FBS teams.

Does Alabama have a good defense? Certainly. But they're giving up their highest yards-per-play average since Saban's first season, and they've allowed 150-plus yards on the ground three times this season. What is not up for debate is that aside from a Texas A&M team in mid-September, they have not seen an offense like LSU's all season. And even the Aggies, as explosive and difficult to defend as they are, can't match LSU's diversity, with a power running game to compliment the efficient air attack.

We're in for one hell of a matchup here, folks. And it all starts under center.

Daisy of a Duel

For the first time in...well...in my memory to be sure, the focal point of this game will be on the two quarterbacks, Zach Mettenberger and A.J. McCarron. They're two of the best quarterbacks in the country, and become the central focus of their offenses.

As I talked about earlier in the week, Alabama has shifted their offense more towards a West Coast style, relying on a lot of stretch-zone running and a short passing game that plays to McCarron's strength. The receivers, aside from Amari Cooper, aren't a particularly dynamic group but are experienced and know how to get open and move the chains. The top two running backs, T.J. Yeldon and Kenyan Drake, can also make explosive plays out of the backfield as well.

The Tide haven't abandoned ball control, and are still relatively risk-averse, but have traded pounding away with a bowling ball like Mark Ingram, Trent Richardson or Eddie Lacy for a possession passing game that will simply take what's there with stick routes, shallow crosses and screens. Cooper is certainly one of the league's top deep threats, but he's battled turf-toe all year long, and that's somewhat limited the Tide's ability to take shots down the field. Slot receiver Christian Jones will also get involved in the screen and jet sweep game.

The problem for LSU, is that's exactly the style of offense that the Tigers have struggled with this season; one that can get the ball out quickly and target linebackers and safeties.

But on the other side of the ball, there will be opportunities for Mettenberger as well. Alabama's veteran corners like Deion Belue and John Fulton have struggled at times, and backups Bradley Sylve, Cyrus Jones and Eddie Jackson haven't been tested in more than a month. The Tide have seen just two quarterbacks ranked in the top-50 in passer efficiency: Mssr. Football and Colorado State's Garrett Grayson, who completed a respectable 24 of 38 for 228 yards. The rest of the slate includes teams like Arkansas, Tennessee, Kentucky and Georgia State. If you want a point of reference, Florida has thrown the ball better than those four this season.

Mettenberger had his breakout performance last season in this game, and if he can continue to do what he's done in at least eight out of LSU's previous nine games -- keep this offense in the right play at the line of scrimmage -- there will be chances to make some plays with Odell Beckham Jr. and Jarvis Landry.

Both quarterbacks will have their chances to make plays Saturday night. The one that makes the most while avoiding the big mistake will likely be the one that comes out on top.

That said, Mettenberger and LSU's offensive staff have to be willing to be patient and let the game come to them. Saban and Alabama's defense does a great job of pouncing when an offense takes a foolish chance and makes a mistake.

Part of what has made LSU so difficult to defend has been that in addition to Mettenberger, Beckham and Landry, there's a dangerous and explosive power running game with Jeremy Hill. Expect Bama to do what it can to avoid putting their corners in one-on-one situations with Beckham & Landry too often. If the Tigers want to force their hand they have to be willing to pound Hill (and Kenny Hilliard) and draw a safety down into the box. Elliot Porter has struggled at times with nose tackles in an odd-man front, but seemed to turn a corner in the Florida game. If he can get back to that it will create more alleys for J.C. Copeland and Connor Neighbors, and even more space for the running backs. Outside, the receivers have to lock on to those Alabama defensive backs and keep them from crashing in. The Tide corners and safeties have always done a great job of fitting into their gaps in the running game in recent years.

Running right at a movement front like Alabama's is usually the best policy as is, and while C.J. Moseley is a stud linebacker, there's no Terrence Cody or Josh Chapman in front of him to eat blocks. The running game doesn't have to necessarily make the big plays we've seen in other games, it just has to be effective enough to keep the offense on schedule. Force Saban and Kirby Smart to be the ones to take that big chance, and give the receivers that matchup down the field.

Last year, LSU had a lot of success with different variants of what's known as the three-level, or Flood concept: 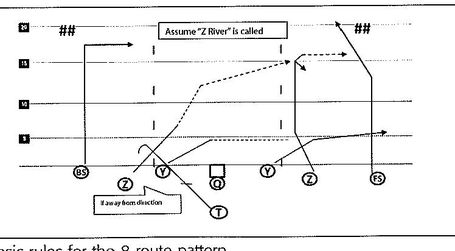 Basically, running three receivers into a third of the field (outside of either hash, or between them) in order to stretch a defense vertically and overload zones. Cameron hasn't called a ton of these plays in 2013, but that's largely been a product of defenses still giving Beckham and Landry single coverage down the field. Alabama will likely try to avoid that if they can, if not outright try to funnel Mettenberger to a secondary or underneath target. If that means more looks for the tight ends or backs, it's on Mettenberger to find the open guy. Be it Travis Dickson, Dillon Gordon, Kadron Boone, Travin Dural, Copeland or Hill.

Misdirection and screen plays to the wide receivers will be swallowed up quickly by Alabama's DBs, and besides that, the Tigers haven't exactly executed those well anyway. Running backs could be a different situation, particularly if Alabama is forced into some predictable pressure situations. Watch for Hill to get some more looks in the passing game as well, such as the waggle play that picked up a big gain versus Florida, as well.

Patience is the key virtue though. Mettenberger has to be willing to take those underneath throws and keep the offense on the field. Cameron has to be willing to let the offense grind out long drives, and protect the defense. And the skill position players, particularly Beckham, have to keep their minds on simply doing their jobs. They can't all be the hero every time they touch the ball, but they can damn sure be the goat if they turn it over.

If the Tigers can do these things, be patient, and execute, they will move the ball and score points on this defense.

Get It Right, Get It Tight

LSU is what it is on the other side of the ball. They aren't about to shut down this Tide attack, but if the right players step up, they might be able to slow it down.

When the Tide run their zone plays, Jermauria Rasco and Danielle Hunter need to get off of the ball, get their hands on the offensive line and set the edge. Allow the linebackers to hit their gaps and at least gum up the works for the defensive backs to get to the ball.

In passing situations, the linebackers and defensive backs may have to take some risks in underneath coverage. They can't allow cushions and give Alabama's receivers and tight ends yards-after-the-catch opportunities. McCarron will take whatever the defense gives him.

If Ego Ferguson and Anthony Johnson can live up to their reputations, that could be an area where the defense can make some things happen. McCarron has a good feel for wide pressure and will step up in the pocket and avoid it. But if you can get to him through the A-gaps he has a bit of a tendency to throw off of his back foot. LSU's defensive backs haven't exactly taken advantage of those situations too many times this season, but any edge they can get is a good thing.

I'm already on the record, and I'll stand by it. This will be the highest-scoring game in this series since the 2007 41-34 slugfest. The Tigers' defensive issues are known, and the lofty rankings hide the most vulnerable Crimson Tide defense in some time.

Two senior quarterbacks. Efficient passing attacks, and dangerous running games. Maybe this game comes down to kicking again, but both teams will get into double figures.

LSU is playing with some house money in this one. I still reject the idea that there's "nothing to play for," but they need to let that work for them. Try to get ahead early and let that pressure build on Bama. Take shots when they present themselves, but avoid turnovers at all costs.

Watch for special teams to maybe play a role in the return game. Alabama's Christian Jones is dangerous, but the Tiger punt teams have been pretty damn solid there. The Tide might give ODB a few pitches to hit on punts though, and even more on kickoffs, where Cade Foster hasn't put the ball in the endzone as often as anybody would like. Of course, with Colby Delahoussaye's injury, we probably don't want this to come down to a field goal.