Odell Beckham Jr. did a lot of amazing things in 2013. I submit as evidence:

And none of these even capture what is arguably his best play of the year:

That's right, Auburn, not only did we beat you, OBJ did it first. And oh yeah, dose mitts doe: 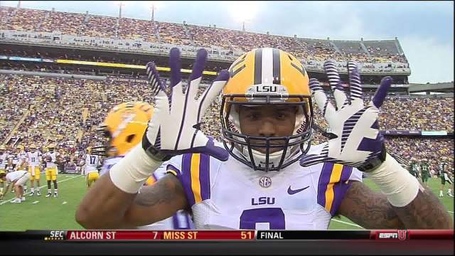 Last night, Beckham's tremendous accomplishments were rewarded as he was named the winner of the 2013 Paul Hornung Award. Beckham ranked 2nd nationally in All-Purpose Yards per game, averaging 185.17 yards in each game he appeared, behind only Antonio Andrews at Western Kentucky. The big difference? Andrews touched the ball 230 times more than Beckham (337 to 107). All told Beckham averaged 20.8 yards per touch to Andrews 7.8. Without a ton of time on my hands to compile the data, and no quick and easy resource (CFBStats has the data, but you have to sift through every team), I'm going to venture the number of players to touch the ball 100+ times in a season and average over 20 yards per touch is very few.

The Hornung Award is rewarded to the "most versatile player in major college football," and it's hard to argue against Beckham being just that. He touched the ball as a wide receiver, a running back, a punt returner, a kick returner and a field goal returner. But even within those broad strokes, he plays a nuanced game. Despite averaging an astounding 19.6 yards per catch, Beckham didn't make all his hay beating defenses over the top and running under deep balls. Neither did all his production come from turning 2-yard bubble screens into 20 yard gains. He did both, and more. Beckham proved equally adept at turning shorter passes into longer gains, being able to get open deep with double moves, and perhaps most consistently, finding soft spots in the zone, and settling down to make a big target for Mettenberger. Did I mention he got the job of playing Johnny Football's body double in the preparation for Texas A&M? You know, the game LSU played it's best defense of the season? That is versatility. That is Odell Beckham Jr.

I've long been a fan of Odell. In 2011, before he became the player we know he is now, I even wrote about his hands. Dating back to his pre-playing days, I labeled him explosive, with the potential to become "the first 'small' WR star to come from LSU in some time" (two pats on the back for a stunningly accurate evaluation, Paul). Beckham is a player that's battled drops in his career, which is something I think is less of an issue with his hands than his mind. Like Terrell Owens, a player who similarly suffered from lapses in concentration, he's angling for the next move, the next step... and sometimes drops the ball. In 2013, he largely shored that up.

Anyone who tries to reduce his career to the mistakes he's made is severely missing the boat. I've heard fans label him "inconsistent," which is a notion I dismiss with prejudice. Beckham caught 40+ balls in every season he played at LSU. Three different QBs, two different offensive coordinators, no big deal, imma just keep on catching 'em. By comparison, Jarvis Landry only caught four passes in 2011. Rueben Randle only caught 40+ passes once. LaFell did it, but as a Sophomore/Junior/Senior. No player in recent history, not Bowe, not Doucet, not Davis, not Tolliver, managed 40+ catches in each of his first three seasons. If that's not consistency, then what is?

But let's get back to focusing more on what Beckham accomplished in 2013. If Jarvis Landry became the warrior-hammer on 3rd downs, an always dependable force that could crack through any defense, Beckham was the sword that sliced their heads off. Landry was the body blows and Beckham was the knockout punch. When you're good for two first downs every time you touch the ball, you are doing something right.

Beckham's 2,222 All-Purpose Yards are the most in a single season by any LSU player ever. He's only 175 yards shy of breaking the SEC's single-season mark, and that's with missing most of the Arkansas game. In short, if Beckham shows up in Tampa and plays an Odell-Beckham-Jr. type of game, he'll be the SEC's Single Season All-Purpose Yardage leader. It's a 2013 that will dot the record books, both LSU and SEC. What a spectacular, sensational season, that deserves to be celebrated.

I don't know if Odell Beckham will return for his Senior campaign, but if not, that was one helluva farewell campaign.