Getting to Know the Iowa Playmakers: The Offense

A quick look at some of the top players from Iowa's offense and what LSU fans can expect to see.

Share All sharing options for: Getting to Know the Iowa Playmakers: The Offense

We're three weeks off yet, with plenty more analysis to come, but when playing such an unfamiliar opponent, it's always good to associate ourselves with the major contributors we can expect to see come game day. I'd venture that not many of us spent much time watching much Iowa football this season, so we're probably less familiar with the whos and whats than we are of a team like, say, Mississippi State. 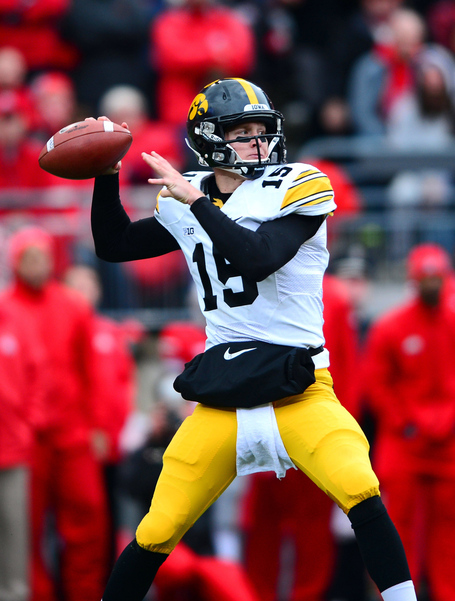 Rudock hails from Florida, and attended the famous St. Thomas Aquinas High School. He's a good-sized QB with decent mobility. Iowa won't call many designed runs for him, but you'll see him get outside the tackle box frequently on designed rollouts, and he's capable of picking up 8-10 yards on a scramble in the open field.

The numbers won't wow anyone. By just about any measure, he ranks middle of the pack or worse. The overall production isn't strong, and he doesn't rank out efficiently either (10th in the Big 10 in passing efficiency). At this point, Jake Rudock isn't a very good quarterback. But, he's young. And like most young QBs, he's adjusting and improving.

He's got a nice, live arm, and the ability to fit the ball into tight windows. His throwing motion is tight, and the ball comes out quick and hot. 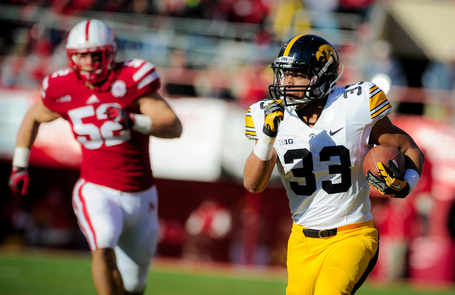 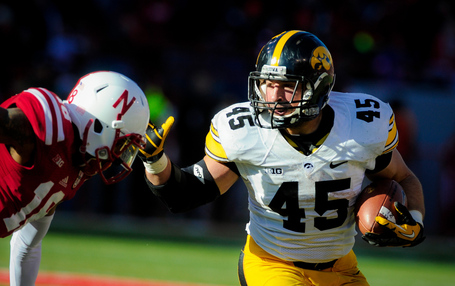 Iowa's offense finally found its footing this year when it started using both halfbacks situationally. Weisman, a bruising 235-lb. converted fullback, was the most important ingredient in Iowa's attack through September, while Canzeri is a 5'9, 192-lb. tailback who was sitting third or fourth in the rotation until late October. When Iowa's line was dominating defensive fronts in the non-conference season, Weisman could handle runs both inside and off tackle. But as the competition improved and adapted, Iowa needed speed to the corner and some elusiveness from its tailback. Enter Canzeri, who has been a revelation on his own and opened opportunities for Weisman. By the time that Iowa traveled to Nebraska for the regular season finale, the offense was the three tight end, play action-heavy blunt force object that Ferentz always wanted.

As you might suspect, Iowa's offense relies heavily on a strong rushing attack, a 60/40 run/pass split to be exact. In many ways, Iowa's running game couldn't be more starkly different than the attack LSU offers, despite a similar emphasis on the power attack. Canzeri produced Iowa's biggest running play of the season, 43 yards. By comparison, Jeremy Hill busted runs of 58, 54, 69, 55 and 52... all by his lonesome. Toss in runs of 65 and 52 by Magee, and you have seven runs longer than Iowa's longest run of the season.

Yet, as we are all aware, LSU often struggled to grind out the "tough yards" in many games, sans Florida. Iowa's 520 carries and 2263 yards illustrate that they are certainly capable of chipping away at the sticks to grind out first down after first down. While the 4.35 YPC is fairly unspectacular, I think we can all reminisce on the effectiveness of Jacob Hester, who would rarely rip a big one, but never seemed to go down behind the sticks either.

Let's not forget the rich tradition of Iowa of developing mullet-wearing hog mollies up front, either. Steinbach, Gallery, Yanda, Bulaga, and Reiff were all 1st or 2nd round picks under Ferentz. Kirk Ferentz knows line play, and you can sure bet you'll see some tough, physical, aggressive, well-coached OL play on January 1. The question for LSU will be whether their DL can stand up to the challenge, because Iowa's run game presents a serious challenge. 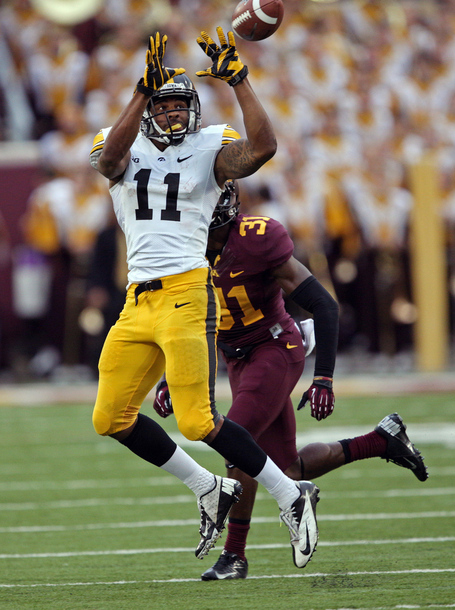 Martin-Manley is Iowa's leading WR. Yes, all 384 yards of him. By comparison, Jeremy Hill and Travin Dural, hardly mainstays in the LSU passing attack, posted a combined 25 catches for 326 yards and 2 TDs. Seeing the low totals, it's almost hard to believe Rudock managed nearly 2,300 yards passing (a single season total higher than either of the [QBs redacted] ever managed to attain). Martin-Manley averages only 9.7 YPC. In fact, the only Iowa target to post over 15.0 YPC, Damond Powell, also caught only 12 balls, and 74 of his 291 yards came on a single play. Powell has catches of 49, 54, 74 and 38 on the season, so while the catches are few, he makes them count.

Iowa's passing attack is more body blows than knockout shots, something that should play into the favor of the LSU secondary that's been tried at times this season.

We expect Iowa to feature a "game manager" QB with a steady rushing attack, and that's more or less what we'll get. Canzeri brings a little bit of zip to the offense, and 6.7 YPC is hard to ignore, even if it's on only 67 carries. To me, he's reminiscent of our own Terrance Magee, the type of one-cut slasher that can gash a defense if he hits an open seam. He's a pretty disciplined and patient runner, capable of ripping of 7, 8, 9 yards runs consistently, but I doubt we see him take one 80 to the house.

As for the rest of the offense? Well, it's hardly an explosive unit. Iowa manages just 5.4 yards per play. Of the offenses we faced this season, only Florida's albatross was worse. Iowa fans insist they've improved over the course of the season. The numbers don't really bear that out. In their final three games, the ones with supposed improvement the numbers look as follows:

What Iowa does well on offense is bleed the clock dry and keep their strong defense rested and ready. They rank 32nd nationally in ToP, and while that's often an overrated stat (Baylor is 110th and I doubt anyone worries about them scoring points), it's a formula that works for Iowa. Run the ball, keep the defense rested, get three and outs and do it all over again. Iowa wants the Outback Bowl to be a 12-rounder with both opponents spending a lot of time on the ropes. If they somehow manage to fall to a large deficit, or even more improbably, wind up in a shootout, it's unlikely Iowa's offense can sustain a level of production enough to keep up with LSU, even considering a first-time, true-freshman QB will be at the helm.