Getting to Know the Iowa Playmakers: The Defense & Special Teams

A quick look at some of the top players from Iowa's defense and special teams and what LSU fans can expect to see.

Share All sharing options for: Getting to Know the Iowa Playmakers: The Defense & Special Teams

For every reason I can find to criticize the Iowa offense, I can find one to compliment the Hawkeye defense. Iowa, historically, boasts a solid, sneaky tradition of putting quality defenders into the NFL. As LSU fans, we're all too familiar with teams that grind it out on offense and suffocate you on defense. It's a formula that's worked well for us, and one that Iowa clearly ascribes to as well. Screw all that explosion and point scoring and stuff. Tackle, bleed, pylons, football.

Iowa wins ugly. So here's a quick look at just a few guys to keep an eye on come Wednesday. 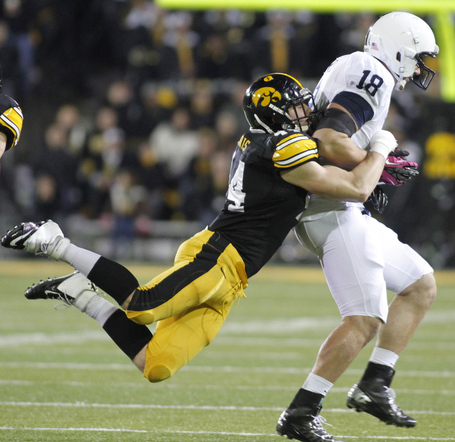 The highlight of Iowa's strong defense is undoubtedly their trio of Senior LBs, a trio that all finished in the top 10 in tackles for the Big 10 in 2013. Of the three, Morris is the biggest playmaker, contributing as both a pass rusher and pass defender. At 6'2", 240 pounds, he's the type of middle linebacker that LSU fans always covet. Patrick Vint from Black Hearts Gold Pants had this to say:

Morris is a fourth-year starter at middle linebacker whose dad is the longtime Iowa equipment manager, and who won second team all-conference honors in a Big Ten loaded with linebackers. You will hear about these things repeatedly on any Iowa telecast. What you won't hear is that Morris has made significant strides this year in play diagnosis, both at his position and in guiding the defense as a whole, and it's been his improvement as much as any other player that has contributed to the return of Iowa's typical defensive dominance. Morris, along with weakside linebacker Anthony Hitchens, has made running up the middle almost impossible against Iowa in the second half of the season. Given your quarterback situation and Jeremy Hill's propensity for blowing fools up, the LSU running game against Iowa's front seven could be the most important part of the game.

Morris on Hill will undoubtedly be a key match-up to watch this game. Iowa's excelled at keeping opponents from running North-South on them with any real success. Conversely, LSU's best gains from Hill have come when plowing right through the middle of opponents' defenses. Iowa has allowed only 40 rushing plays over 10 yards this season, something LSU has done nearly twice that much (78 total rushes over 10 yards). It's immovable object vs. irresistible force, in that regard.

Morris isn't just your prototypical thumper in the middle, though. He tied for 4th in the B1G in TFLs, 11th in sacks, and ranked second among all B1G linebackers in passes defended. So he's got a well-round, multi-impact game. We've seen LSU struggle repeatedly against stunts and switches up front... how Iowa deploys Morris as a pass rusher should be interesting to watch, considering they don't get much of that from the front four. 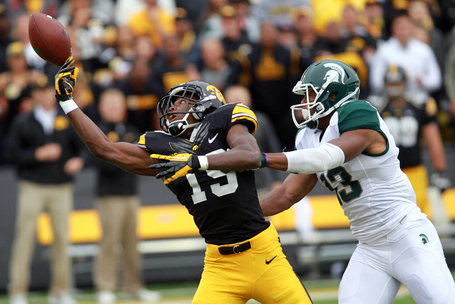 Lowery is another in the line of sneaky, quality secondary members to play for the Hawkeyes. At 5'11" 193, he's got solid size for the position, and excellent athleticism, as evidenced here:

The next in a long line of Iowa defensive backs built from modest, overlooked Ohio recruits, Lowery is headed to an NFL stadium near you next season. He's had a bit more difficulty than some of his predecessors, as second-year defensive coordinator Phil Parker has strayed from Iowa's all cover 2 zone all the time defensive philosophy with increasing regularity. Couple that with some modest talent at safety, and Lowery has looked bad on occasion. But he's also Iowa's best athlete on the defensive side, the only guy who can make a play like [the one above].

Lowery isn't the best corner we've seen all season, but he's athletic and capable of making big plays. He's another guy Jennings needs to be aware of come Wednesday. 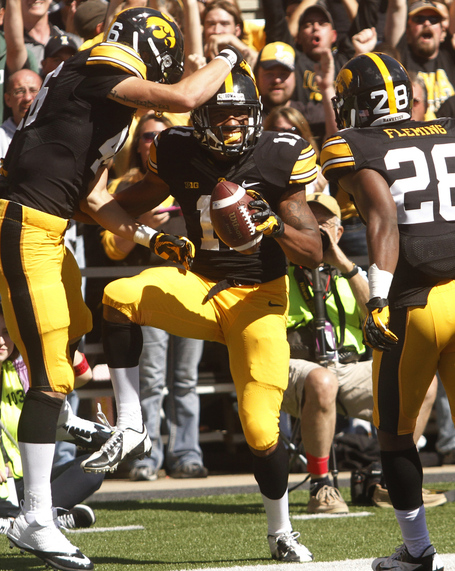 I previously detailed Martin-Manley as a WR, but he may be most effective as a returner. He averages 16.22 yards per punt return, a number that ranks him 7th nationally. He's housed two of 'em. So there's obviously some explosion there. LSU's punting game has wavered some in 2013, but LSU still didn't allow a single punt return over twenty yards, while leading the nation in punt return yards allowed on average at just .91 yards per return. Only 11 punts were returned on LSU all season, so it'll be fascinating to see if Martin-Manley and the Iowa STs can find room, or if Jamie Keehn and the LSU STs will continue to eliminate yardage in punt situations.

Martin-Manley's numbers are skewed slightly by an absurd September game against Western Michigan where he racked up 184 return yards and two punt return touchdowns. It was so absurd that, had Kirk Ferentz not pulled him, KMM would likely have broken Nile Kinnick's record for punt return yards in a game, a record that has stood for 74 years. He's certainly capable of a big return, on the rare occasion that Iowa actually returns a punt. 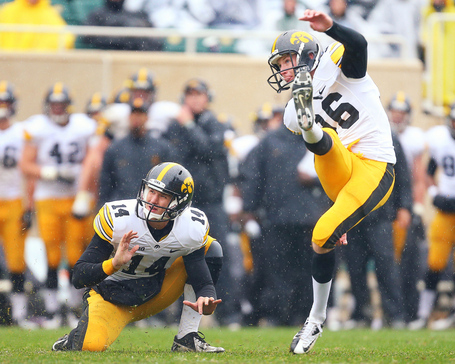 We couldn't do an Iowa player preview without mentioning some facet of the kicking game, right? Sadly, it's not the punter, but Iowa's experienced Senior kicker, Meyer. Meyer's not been the most accurate (connecting on just 76.2% of his FG attempts), but he's got a big leg. Here's Vint:

He's got the leg to connect from more than 50 yards. He's got the experience to get past jitter. He also has a maddening tendency to miss chip shot field goals from the hashmarks. On a team that wins by razor-thin margins, that's been a problem, but overall Meyer is a pretty damn good kicker.

I don't have a ton to say about Meyer, but this did lead to me doing a little digging on Delahoussaye/Hairston, and let me just say, it's remarkably impressive how consistently we churn out good collegiate kickers. We rank top 15 nationally in kickoff average, top 10 in touchbacks. We're also top five in field goal accuracy. Toss in the impressive punt coverage numbers, and it's hard to believe LSU has anything but a decided advantage in the kicking game in this game.