The Outback Bowl -- LSU vs. Iowa: What to Watch For

Last game of the year Brent, can’t hold anything back now…

Share All sharing options for: The Outback Bowl -- LSU vs. Iowa: What to Watch For

And now here we are. Last LSU football game for eight months. Excuse me for a second...

I know there isn't a ton of excitement for this one folks, and most people care way more about what's supposed to happen on January 2 way more than January 1. But bear with me here. The offseason is long.

What to Watch For in the Outback Bowl

For the last couple of seasons, the major topic of discussion surrounding LSU football has generally centered on finding a consistent offense to compliment the dominant defenses that have found ways to win a lot of games the last few seasons.

Wednesday offers Les Miles' program a chance to move forward into that era even further, with a new quarterback and a host of young talent on the roster. What's more, with the promise of a slew of commitments the next day in the Under Armour All-American Game, the first two days of January could turn into one hell of a two-day LSU love fest.

It sucks -- it sucks royally -- that Mettenberger can't lead this team one last time. He played his ass off this season and gave his heart, and his knee, to LSU and he deserves a happier ending. But on a cold, hard, football level, it's probably a good thing to get a start and full game's worth of action from Anthony Jennings. It will give Miles and the staff their first real feel of just what he does and doesn't do well, against a very good defense, as the program prepares for one of the most interesting spring practice sessions in some time.

As previously discussed, this game and the practices around it will be huge for a host of younger players: Travin Dural, DeSean Smith, Christian LaCouture, Ricky Jefferson and LSU's starting corners. Young-ish vets like Jalen Mills (likely starting at one of the safety spots next to Craig Loston), Kwon Alexander, Danielle Hunter, Jermauria Rasco and several offensive linemen also have a chance to make statements on their place in 2014 as well.

And let's face it, we might very well be seeing the final games from guys like ODB and Landry, along with Jeremy Hill, Ego Ferguson and Anthony Johnson. Here's to them going out on a good note, should they so choose.

On to the game itself, which will offer an interesting barometer of LSU's development on the line of scrimmage, provided the Tigers come to play. This Iowa team, despite changes in both coordinators, looks a lot like what's been the basic formula for Hawkeye football under Kirk Ferentz. Tough defense with a physical, no-frills offense. Low-margin football built on trying to put the other team in the position of making mistakes, which Iowa will capitalize on.

First down is going to be huge on both sides of the ball. The Hawkeyes' offense features the offensive line stylings of Ferentz, who has built a reputation as one of the top college talent developers in that area in recent seasons. Iowa loves zone running, both wide and tight, and will supplement that with some counters, traps, powers, etc...Look for lots of two- and even three-tight end looks, which gets the team's most talented receivers, tight ends C.J. Fiedorowicz and Jake Duzey, on the field. The two nearly have as many catches and yards as the top three wide receivers combined. Running back Mark Weisman is a 240-pound hoss. A former walk-on fullback that is completely happy to just thud away for three or four yards a pop and keep the opposing offense off the field.

While I do think LSU's cornerback tandem can contain the Hawkeye wideouts, those tight ends will be problematic. Fiedorowicz is a 6-6, 265-pound athlete that will certainly play pro ball one day. He'll get most of the looks in the red zone. Quarterback Jake Rudock has been pretty efficient, and from limited film study throws a nice ball and has the mobility to be problematic.

Iowa averages a very steady 4-plus yards on the ground on almost every down, but when they do take chances on offense, it comes on first down. Ruddock averages 8.3 per attempt on those downs, but his completion rate drops to 52 percent. Plus, seven of his 13 interceptions have come in that situation. The faster LSU can get the Hawkeyes taking chances, the better off that young secondary will be.

Conversely, the Hawkeye defense is at its most vulnerable on first down, where they allow their highest yardage and completion rates in the air. The problem is that if those passes aren't completed, the defense clamps down. They allow just 3.4 yards per carry on the ground, and 5.8 yards per attempt in the air overall.

For most of Ferentz's tenure, that defense has been run by Norm Parker with an aggressive, cover-two zone based scheme that didn't blitz, but rarely had to. Open up that secondary umbrella and swarm to the ball to limit big plays and force the offense to string together 10-plus plays, during which there will likely be some sort of mistake that either forces a third-and-long and a punt, or a turnover. In past seasons, Iowa would have stud linebackers like Chad Greenway, Abdul Hodge and Pat Angerer to swarm the ball, and they'd have defensive ends like Adrian Clayborn and Matt Roth to allow them to get a pass rush without blitzing. On the back end there were safeties like Bob Sanders, Tyler Sash and Sean Considine that fit the deep-hash/run-support role.

His successor, Phil Parker (no relation), has more or less maintained that style with some minor tweaks. The Hawkeyes like to bring a safety down into run support on first down and then back them up after that, but whereas the previous Parker tried to keep a base unit of three linebackers on the field on most downs, the new Parker will use some nickel and dime sub-packages, and a little more blitzing on third down out of some "psycho" fronts with one or two down linemen and the rest of the front on their feet and moving around.

There aren't the same playmakers on the defensive line or in the secondary, but there are three very, very good linebackers that collectively lead the team in tackles, tackles for loss, sacks, and interceptions. Anthony Hitchens, James Morris and Christian Kirksey are all big bodies that can fill gaps and still get back into space and run. LSU will have to find a way to get blockers on them in the running game.

If I've had one quibble with the 2013 LSU offense, it's that Cameron, and by extension Mettenberger, have at times pressed a little too hard to make big plays happen. That's resulted in turnovers and stalled out drives, with a defense that really can't afford to spend too much time out on the field.

Mettenberger might not be pulling the trigger on Wednesday, but Cameron has to avoid that greediness with a new starter. Yeah, low-margin, grind-it-out football is a little more in Iowa's wheelhouse, but it's not like it's a foreign concept to LSU in the Les Miles Era. Iowa doesn't give up big plays, which means they thrive when an offense tries to force them. Use the running game and the short passing game to stay on-schedule, and make the Hawkeyes gamble on defense. Protect Jennings, and he can force the defense to give him the best opportunities to create some explosive plays with Landry and Beckham.

Three or four yards a pop shouldn't be considered a bad thing, so long as the offense can avoid risky situations. Plus, as well as this run defense has played at times, it allowed an average of 197 yards in Iowa's four games against ranked opponents. Hill has only had one game of 25 carries this season. I think that if LSU really makes an effort to feed its feature back in this game, he could possibly take it over.

And there will still be some opportunities down the field.

The "legend" (quotes around it till he gives me a reason to take ‘em off) of Jennings came from this play, called "Tsunami." It also happens to be one of the better zone-defense beaters in the LSU playbook, identified as 439-Flat in Don Coryell parlance. Also known as the three-level vertical stretch, or "flood" concept. 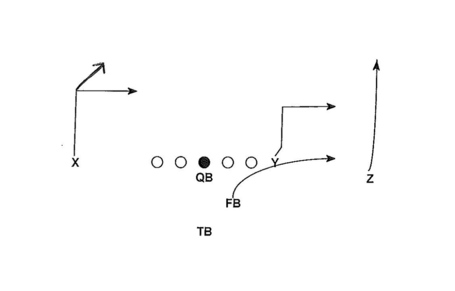 The play is designed to overload a third of the field and create some one-on-one matchups for those zone defenders with receivers in the flat and intermediate areas while one outside receiver attacks the deep sideline and another the deep middle on the backside. It's a versatile concept that can be run out of a lot of formations: 21 personnel, as pictured above, 20, as we saw at the end of the Arkansas game, or various 1-back and spread looks. You can even work in play-action.

In general, the play is designed specifically to put the flat defender in a bind with the short and intermediate option route. If he defends the short throw, the intermediate will be one-on-one with a linebacker or nickel back. Versus Arkansas, LSU was able to take advantage of the extra attention Jarvis Landry commanded on that option route, giving the outside receiver (Travin Dural), a one-on-one look versus the cornerback with no safety help. One double-move later, easy six.

Another possible advantage of Jennings getting his first start here is that with a season's worth of practice reps throwing to guys like Dural, Kadron Boone, Travis Dickson, etc..., he might not be quite as locked in on Beckham and Landry, the way Mettenberger could be at times. Don't get me wrong -- those two still need to get their targets, and will. What's more, Beckham/Landry versus Iowa's corners is a mismatch that favors LSU decidedly. But if plays like this create opportunities for secondary receivers, Jennings has to take advantage.

Still, Cameron needs to use high-percentage throws. Short passes, misdirection plays like play-action bootlegs (see also, the PA waggle throw to Hill that was very effective against Florida and Alabama) or concepts like Tsunami, that allow for a very clear short read, should the defense be dropping deep. Once Jennings is in a rhythm and playing with confidence, then LSU can try to take some shots down the field.

Ease Into the New Year

The confidence on both sides of the fence in this game has kind of been a bit funny to me. LSU went 9-3 this year, and has really shown that they can't afford to overlook anybody. Iowa went 8-4 and lost to the four ranked opponents they faced by an average score of 29-18.

I mean don't get me wrong, I think LSU has a great chance at winning this game. Comfortably, even. But so do the Hawkeyes. The Tigers' track record in bowl games has been trending down in recent years, and a true freshman quarterback is making his very first start against a top-10 defense. It's not unreasonable in the least to picture that going very badly. And of course, the Tiger defense still is what it is, and it might not be able to stop Iowa.

This is a game that will be won at the line of scrimmage. Both of these teams have very good offensive lines, and the one that does the best job of imposing its will on the defense will probably decide the outcome.