SEC Wrap Up and Tournament Look Ahead, Plus Our All-SEC Teams

Head coach Johnny Jones was able to somewhat successfully navigate through the SEC regular season and finished tied with Georgia in 8th place. Jones was able to rally his team after a poor start and now has the media talking about LSU as an NCAA team for next year. This season still isn't over yet, though, and LSU is primed to make some noise in the SEC tournament.

Share All sharing options for: SEC Wrap Up and Tournament Look Ahead, Plus Our All-SEC Teams

This award is totally up in the air, and I wouldn't complain if any number of players won it, including the injured Nerlens Noel. I picked Henderson, partly based on reputation, partly because of how well Ole Miss has played, and partly because there's no one else I feel confident picking. He can win games with his shooting, and lose them as well, but overall his impact seems to be the largest among SEC players this year.

I had some trouble deciding which player deserved SEC Player of the Year. Florida has 5 quality starters, but no one really stands out since they are so balanced. Kentucky's freshmen have been up and down all season, and Nerlens Noel missed the last 7 games of the SEC schedule. Ole Miss had a strong year, but Marshall Henderson is basically a volume shooter who isn't elite at anything besides getting to the free throw line. He doesn't even shoot 40 percent from the field or the three point line.

So I was basically left with Kentavious Caldwell-Pope. Georgia is not a good team, but Caldwell-Pope deserves much of the credit for keeping the Bulldogs at .500 in the SEC. No one else on his team scored even 8 points per game or grabbed 5 rebounds. Meanwhile, Caldwell-Pope put up 18 points and 7 rebounds a game, all while shooting at a decent percentage.

In an overall down year, I think the coach that gets the most out of his team deserves the award. Florida had some slips along the way, but if the SEC is going to win a national title, Florida's really the only team that can do it. Cuonzo Martin may be a trendy pick for the award, but Tennessee is a team that came in with expectations that weren't met until way late in the season.

It was a disappointing season for coaches like John Calipari, Frank Haith, and Mike Anderson, as none of their teams met pre-season expectations. Billy Donovan was in charge of the conference's best team, and he certainly deserves a lot of credit for his team's play. However, the Gators showed a surprising inability to close out tough games, including the game this weekend against Kentucky.

On the other hand, Johnny Jones exceeded all expectations in his first year at LSU. I thought I was being charitable when I predicted this year's team would win even 6 conference games. The team had a dismal start, dropping games against Auburn, South Carolina, and Georgia. Since then, Jones has led the team to a 9-5 conference mark and an 18-11 record. Considering the deficiencies on this year's team, that is very impressive.

As a sort of consolation prize, Nerlens Noel should win this award. He was clearly the most exciting freshman when healthy. Defensively, he was quite dominant as a shot blocker and was also a very good rebounder.

To label this year's freshmen crop underwhelming would be an understatement. Archie Goodwin struggled to hit shots in SEC play, hitting one three-pointer from January 2 to February 23. Alex Poythress disappeared in several key games. Devonta Pollard didn't look at all like a 5-star talent. However, there were some pleasant surprises from under-the-radar recruits. Michael Frazier was very good for Florida in small stretches and is sure to be one of their key players next season. And Michael Carrera put up 10 points and 7 rebounds a night for the Gamecocks. However, despite missing the last 7 games of the SEC schedule, Nerlens Noel was the best freshman in 2012-13.

If we had a Newcomer of the Year award, it would have been a much more interesting race. Charles Carmouche, Alex Oriakhi, and Marshall Henderson were all huge contributors after transferring in to the SEC.

*I thought Noel had a very solid year, but he lost his chance to be an All-SEC player after his injury. 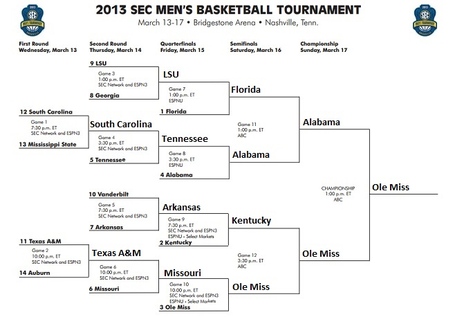 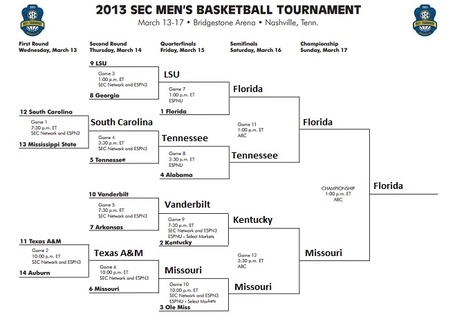 As mentioned previously, the SEC took a beating out of conference this year, and fans can now see how badly it is reflecting in bracket projections. Any number of teams are on the bubble, including Ole Miss, Alabama, Kentucky, Tennessee, and Arkansas. Ultimately, only two of those teams, at most, will make the tournament. Already, teams are being upset and stealing the minimal bubble bids left, and these teams will beat each other still and end NCAA hopes.

Ultimately, although I picked Ole Miss to win the SEC tournament, I expect someone other than massive favorite Florida to win it. Although the Gators have plenty to play for, I think their recent play isn't at the level it needs to be to dominate over a three day period. Any number of teams can win it.

At the end of the day, I think the SEC will end up with four in the NCAA tournament, but that's with some optimistic thinking. If things go horribly wrong in the tournament and with upsets elsewhere, only two could end up making it.

Florida was the one team that stood above everyone else in the SEC, and even though they had some poor results in the past three weeks, going just 3-3 to close out the year, they should be the favorites in Nashville. No other team has shown the consistency to put together three consecutive wins against above-average opponents.

However, only one game separates second place from sixth, so I do anticipate some upsets in the quarterfinals and the semis. Missouri has a lot of talent, and with a healthy Laurence Bowers, I expect them to do well. And if I had to pick an upset in the opening days, I would go with Vanderbilt upsetting a fading Arkansas squad at Bridgestone Arena.

Last but not least, the official awards have been selected and LSU forward Johnny O'Bryant is first team All-SEC, while Anthony Hickey was an All-SEC defensive player.