A look at the LSU baseball team's offensive stats through the non-conference part of the schedule.

EDIT: Everyone give an ATVS welcome to dr.awesome504 who will be doing some advanced stats breakdowns for us this baseball season

Time for a look at the offensive statistics from LSU’s non-conference play. I think now is a good time to analyze how LSU did against its non-conference foes because it will give us a good baseline to see how things change when the level of competition ratchets up in SEC play.

First, the basic stats and advanced statistics themselves.

I like to focus on a few metrics when measuring offensive production. Gross Production Average (GPA) is a combination of slugging percentage and on base percentage that assigns more weight to on base percentage. GPA helps you interpret how often a batter is getting on base and hitting for power, and it can be interpreted the same way batting average is interpreted: 0.200 is poor, 0.265 is average, and 0.300+ is fantastic. Runs Created (RC) helps measure a players’ offensive contribution to the team based on all offensive stats. Runs Created then assigns a run value to that production. I'm using the "technical" version of RC because it is easy to calculate and fairly straight forward. Pitches per Appearance (PAPP) measures how patient a player is at the plate by calculating the average number of pitches seen in a plate appearance.

Solid Production from Katz and Rhymes

Mason Katz and Raph Rhymes are the heart of the LSU lineup and both are off to good starts.

Katz leads the team in GPA at 0.369 and is second in RC with 17. Katz is the power hitter on the team (duh), so his home run hitting leads to his high GPA and RC totals. His batting average with runners in scoring position is solid at 0.333 (9/27). We have come to expect this kind of production from Mason, so we should look for him to help lead the charge into SEC play.

Rhymes is third in GPA and tied for third in RC. Rhymes’ numbers have been solid through these 16 games. He has hit well and shown some good pop with his bat, hitting a team high 6 doubles. He has also hit for average well, but he has not taken advantage of his opportunities with RISP, only going 8/27 for a 0.296 average (he’s Raph Rhymes, I expect 0.300). His PAPP is 3.3, which is slightly below team average. Raph does have a tendency to put the ball in play on the first or second pitch in his plate appearances, doing so 31 times in 64 at bats. But the results are incredible. GPA of 0.364, batting average of 0.452, 0.438 (7/16) batting average with runners in scoring position, 9 runs created. Give the guy the green light please.

The New Guys Are Killing It

The contributions from freshmen Alex Bregman and Mark Laird have been nothing but spectacular for the Tigers so far.

Mark Laird has the fourth best GPA on the team at 0.330 and is fourth in RC with 12. Laird struggled early in the season, but has rebounded nicely since then. While Laird does not hit for power too much (only two extra base hits), he has the most hits on the team (24) and is tied for the team high in runs scored (16). It would not shock me to see Laird leading off in the near future.

Christian Ibarra has been great as well. His GPA of 0.325 is only .005 points behind Laird and he is tied for fourth in RC with 12. He has the second highest batting average with RISP at 0.412 (7/17), so he has been a clutch hitter for the Tigers.

Now to the tricky and hard to explain part of the offense: Jacoby Jones, Ty Ross, and Chris Sciambra. For these guys, I’m going to look at their 5 game moving averages for GPA, OBP, and BA to give you a clearer sense of where they are headed and how some of their stats may be a bit misleading.

Stop Freaking Out, It’s Not as Bad as it Seems

Jacoby Jones is having a pretty average start to the season by most measures and bad by some. His GPA of .281 and his RC of 10 are decent, both are sixth best on the team. He leads the team in steals with eight. But people have been reading too much into everything when it comes to Jacoby Jones.

Yes, Jones has been snake bit at the plate it seems, but he has been a great contributor. Jones' five game moving averages graph is below. 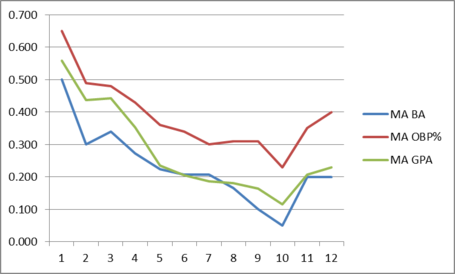 Did his averages drop? Yes. Are they getting better? Yes. Can we stop freaking out now?

Jacoby is the most patient batter in the lineup. He has a team high 16 walks and has the highest PAPP on the team at 4.3. This is why his 5 game moving OBP is on an upswing while the rest of his averages are flat. As long as Jacoby stays patient at the plate and picks his spots, he will continue to be a productive member of the lineup. I would ignore his batting average because we all know batting averages suck at measuring a players impact and even these fancy metrics don’t explain everything.

He does need to improve his hitting with runners in scoring position. 3/19 for a 0.158 average. He can do better there.

Chris Sciambra has seen his production falter since his great start to the season. He leads the team in strikeouts (12), has the lowest BA with RISP (0.091), and has the one of lowest GPA among regular starters at 0.274. Sciambra has a high OBP% and a fairly average GPA, but that is a bit of a red herring. Both are still inflated from the great start that he had. His five game moving averages graph is pretty fantastic in how quickly it drops and then levels off. With so many young and talented guys on this roster, Sciambra could lose his starting gig if he doesn’t increase his offensive production soon. At the very least, he should be moved down the lineup until his production recovers. 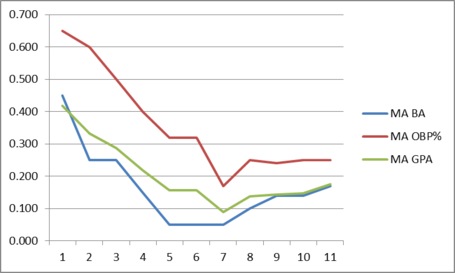 Ty Ross is having a rough start to the year. His GPA of 0.216 is lowest of the eight normal starters and he is tied for the second lowest RC total at 5. Ross has shown some pop with the bat hitting two home runs, but he needs to contribute more if this team is going to do well in SEC play. Based on his moving averages graph, it appears that Ross is slowly starting to turn the corner. All of his averages are trending upwards in recent weeks, so let’s hope this trend continues when SEC play starts. Nobody will be replacing him at catcher, so we need his bat to be more productive. 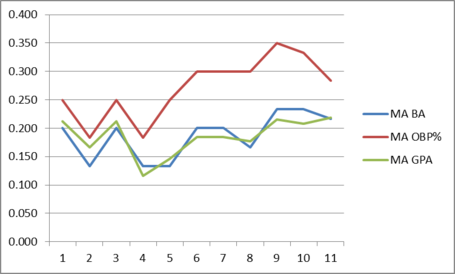 I know I am being unfair here, but the DH in the LSU lineup has been a constant source of annoyance for me so far this season. Tyler Moore and Alex Edward have been filling this position for most of the time, but one has been productive and the other is struggling badly.

Given his better production in recent weeks, I would not be surprised to see Moore get extra chances to bat versus continuing the lefty/righty match up playing that has been happening. Edward has gotten plenty of chances against left handed pitching and has just not gotten the job done.

With SEC play around the corner, the Tigers’ offense seems prepared and all the stats point to a good year for the Tigers at the plate. While there are a couple of trouble spots in the lineup, overall production has been solid enough that the Tigers have not had any trouble scoring runs and winning games. If the rest of the lineup starts producing, the Tigers will be a difficult team to beat.