Midweek games aren't really about the opponent, they are about fiddling with your lineup and playing with matchups. OK, there's a bit of showing off your dominance over the tri-state area in ways Doctor Doofenshmirtz could only dream of, but the goal tonight is to get some guys some action and get a win with a minimal amount of fuss. LSU has a back to back, so there's the additional pressure of not wanting to burn the pen too badly before the weekend series. 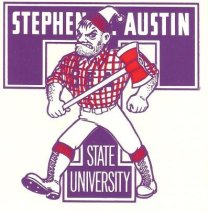 How awesome is that? Let's go chop some wood!

Well, with a mascot like the Lumberjacks, we need to stick with that theme, so let's turn our attention back to those heady early days of grunge. You know, when every band looked and sounded like a bunch of lumberjacks, but none moreso than a band actually named in reference to logging: The Screaming Trees. Now, I'm convinced there is an alternate reality somewhere in which Nirvana remains an obscure group of Melvins acolytes and instead a massive cult of personality develops around Mark Lanegan of the Trees. Of course, he likely would've died from the post-fame heroin overdose just like Cobain, so perhaps he got off lucky. Instead, he's put out consistently excellent solo albums which showcase his trademark gruff vocals. Mark Lanegan could've been one of the biggest rock stars on the planet, but he'll have to settle for being merely a great singer/songwriter. Today's pretentious music choice is the Mark Lanegan Band's The Gravedigger's Song.

SFA is going the midweek starter route as well, deciding against throwing their ace in this matchup. No reason to burn up their best pitcher in what looks like, on paper, to be a lost cause. Choate led the team last season in strikeouts/9 and he's on an early pace to duplicate that feat. He threw a five-hitter against Arkansas last year en route to allowing only one earned run, so it's not like he can't miss quality bats. There is the chance that he can carry the team if he starts getting the strikeouts, so this is a pretty quality call for the start.

Villalobos has already matched last year's home run output with three round trippers already in this young season. He and Dozier are both returning starters and anchor the middle infield with real ability. Dozier adds speed to the mix, and he was an All-Southland Conference player last year. It's always a good sign for team to have quality, experienced players in the middle of the diamond. Sanchez has been the team's leading hitter so far this season, but he's probably playing a bit over his ability level. Still, it's been nine games of hitting 400, which isn't easy to do. While he's not that good, you have to some ability in order to hit that well for an extended stretch. Actually, the Jacks have been living up to their mascot, relying heavily on the team's power. They've hit ten home runs in nine games, and they rely on the longball to score runs. In the Box, that's not a bad strategy.

What do you think? Mid-week game with a guy on the mound who still thinks he can be the Sunday starter? This is a big game for Bonvillain to remain in the conversation for the weekend rotation. He's lost his gig right now, but it's a long time until June. He can work his way back into the coaching staff's good graces, but he's got to make a positive impression now. The last thing he wants is a reputation as a guy who pouts. He wants to show he can react well and that he's a team guy. I really think we'll see the best Bonvillain start of the season tonight.