And a Better Know Your Opponent

Your defending NEC champions! Hey, they made the NCAA tournament last year, and promptly lost two games by a combined score of 29-9. In the closer game, the Pioneers lost by 9 runs to UNC-W. That pretty much demonstrates the gap between Sacred Heart and LSU. This is a pretty big fish in the small pond they inhabit. Changing ponds is probably not the best idea.

Bonus fun fact: Bobby Valentine is now their Athletic Director. No word if he still wears the Groucho Marx glasses.

Sacred Heart has only played three games this year and got swept by UL-Lafayette. Take that for what it's worth. They don't have enough games yet to qualify for the ISR, but let's just assume it's not good. 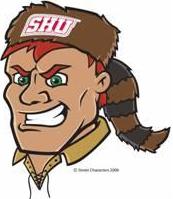 Not really an ancient logo, but more of an alternate logo. Hey, it's a frat guy in a coonskin cap! Let's win one for Chet!

I'm sticking with the Sub Pop theme, given our weekend opponent. This is just an excuse to dig through Sub Pop's catalog in preparation for playing another Seattle export. But with the east coast covered in snow, let's at least choose a video that involves people walking through the snow to have some sort of tenuous connection to Sacred Heart. Well, that and the name. The Head and the Heart are a damn entertaining live act which doesn't quite come through on record, but they are a joyous good time. And look, I know you're trying to find bands that sound like Mumford and Sons, right? Someone's buying all of those albums. Tonight's selection is The Head and the Heart: Lost in My Mind.

Yeah, SHU did not announce their Game Two starter before taking the field for their matchup with SFA, so your guess is as good as mine. Even if they did announce a starter, there's only three games worth of data to look at, so I really have no idea the relative quality of their potential starters. How's that for honesty? But LSU is going to do the same thing. Mainieri will start Rumbelow and I'll be surprised if any pitcher goes more than three innings. It'll be an open up the pen kind of night as both teams just try and get through the game and preserve their staff for the weekend. Get everybody some work, but don't waste anyone for the more important games this weekend. That goes for both teams.

Matt Charmello's one hit on the season is a home run, so it's not all bad. Murphy stole 25 bases last season, so aside from putting up some video game numbers in a losing effort last weekend, he adds speed to his arsenal of weapons. The three returning starters here were three of the four players to get over 10 at bats in the first series. So this is a team that is still trying to figure out who they are, and they will play with lineups and feel free to use their bench at the drop of a hat. It's not that they have a strong bench, it's that they don't know what they have at all right now. Such is the way of things in the early goings of the season.

Yes. Not only did they get swept by the Lesser Louisiana, they have to play SFA earlier in the day. So LSU gets to play a team on the second half of a double header miles and miles from home, while they get to roll out of their own beds after a normal day. LSU already has the edge in talent, and now they get a massive edge in scheduling? Ouch. Sacred Heart would be better off to spend all of their resources trying to win the day game against a more evenly matched SFA squad, and just concede the nightcap. Tell your kids you got to play in the Box, but this is one of the longest upset shots of the season. Sacred Heart is a decent team, but like Bodie tells us, the game is rigged, man. If SHU can overcome this stacked deck, it will be a massive accomplishment.

Radio only tonight, and only on 100.7 in BR due to the basketball game.

Remember these?? They're baaaaack! twitter.com/LSUBaseballPro…