1. Well look who's got the fancy extra stats. Thanks To Bill Connelly and his people at Football Study Hall, there was a nice, handy database of some advanced receiving numbers. Explanation: the top row of numbers notes how many each wide receiver was targeted by LSU's quarterbacks (really, just Zach Mettenberger), the average yardage per target, and what percentage of the total wide receiver targets that player accounted for. Second line, the player's catch rate (i.e., the number of catches accumulated out of their total targets), followed by their rates on standard downs (first & 10 situations, other downs where there's an equal chance of a play being a run or pass) or passing downs (third downs and other obvious passing situations). In general, passing-down catch rate will be lower than standard-down, as the degree of difficulty of the play raises slightly due to target specificity (you're probably trying to hit a pass of a specific distance) and defensive difficulty (because they expect you to be passing). The 60-percent range is a good baseline for catch rate -- most really good receivers are usually somewhere in that figure on all downs, slightly better on standard downs and slightly worse on passing downs. Elite guys will see their catch rates get up into the 70s.

2. The returning starters feature four names we're all pretty familiar with by now: Jarvis Landry, Odell Beckham Jr., Kadron Boone and James Wright. Last season, we wondered whether they would be a strength or a weakness without a true, No. 1 go-to guy like Rueben Randle. It was one of the 2012 team's major questions, and frankly, it wasn't answered in a positive. The issues with catching a ball should be evident in the above numbers (Note: not every missed ball reflected in a catch rate is a drop -- bad throws, batted passes, etc...). I don't have a hard number on how many drops this group, specifically Beckham, Landry and Boone, had, but it was a significant amount, and they all took their turns struggling. Beckham, expected to be the No. 1, had issues right out of the gate. Boone seemed to emerge, but struggled as his role increased. Landry had, by far, the best hands of the group but still had his issues at times, particularly down the stretch.

We've said it several times, but it bears repeating: this felt like a group of complimentary wide receivers without a bona fide, go-to top guy. Now, maybe one of the new guys we'll cover in the next point can be that guy, but that's a lot to ask of a new player. I still think we haven't seen the full ceiling of this group, at least when it comes to Beckham and Landry.

Beckham might have been, in many ways, emblematic of LSU's passing game issues. He hit the season with significant expectations, but when struggles began one problem begat another and he appeared to wear every single one of those mistakes on his sleeve. One drop became two drops, which led to a poor decision on a punt return, or a fumble after a long catch-and-run versus Florida. Beckham always seemed to be pressing to make every single big play possible rather than just trying to make the next one in front of him, a problem that I also believe extended to Zach Mettenberger (but more on that in the quarterback piece). The good news is that a 60 percent catch rate isn't horrible, and the problems look far more mental than physical. Beckham has always been a player that used his hands to snatch the ball. He doesn't "double-catch" or let the ball get into his body, a mechanical issue that always held back guys like Brandon LaFell and Terrance Tolliver.

Landry was much more consistent, but doesn't have Beckham's deep speed. He's a physical target that plays a lot bigger than his size. A natural receiver that made plays all over the field. Concentration was a problem at times, but Landry has the tools to be an incredibly valuable tool in whatever this "new" offense will look like. His catch figures could get better, but they aren't that far off from a lot of much higher-profile targets. Once upon a time, USC's star Robert Woods had a passing-down catch rate of just 53.8 percent.

3. Another interesting aspect of this spring is some of the new (or "new" in Travid Dural's case I suppose) arrivals and their opportunities to contribute. The redshirt frosh Dural drew some rave reviews in fall before a broken leg forced him to redshirt. He's joined by true freshmen Avery Peterson (little brother of Patrick) and John Diarse. Obviously, most expect Quantavious Leslie to fill LSU's need for the previously mentioned big deep-threat, but Dural will likely give him some competition. He's not quite as tall (6-2 instead of 6-4), but he was a fairly high-rated high-jumper in high school, and an incredibly productive deep threat in an offense that didn't throw the ball very much -- averaged 21 yards on 42 catches. What's more, he's drawn some rave reviews this spring, and most think he's surpassed Wright and Boone to start with Beckham and Landry when LSU goes to a 3-wide look. Johnson has allegedly had some fantastic catches in practices and scrimmages, but may still need to add some more weight. Diarse, as Kris detailed, is more of a pure gamer. It wouldn't shock me at all to see him see the field this fall on special teams, but not much at all on offense. Dural's potential is clearly the most exciting, but with Leslie's arrival looming, there's still plenty to shake out here.

4. Among the talk of the changes Cam Cameron has brought to the LSU offense, a consistent theme has been a streamlining of the wide receiver positions, and their role in the playbook per the usual Air Coryell principles. I've talked about it before, but one of the main ways Don Coryell's offense was developing a route numbering system and breaking down play calls to something simple that could be called quickly. For example, see below, a play called "839 F-Flat," called out of the typical two-back pro set: 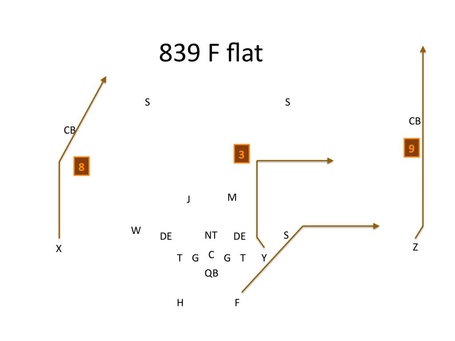 The numbering refers to the routes run by the X receiver (8), the tight end, designated as the Y receiver (3) and the Z (9). The F, or fullback, runs a flat route. LSU already runs variants of this play, and the concept (and playcalling system) can be easily applied to other formations, with a few tweeks. Every set has an X, Y, and Z, but maybe a set uses an H-back instead of a fullback, or a slot receiver. For another example, "525 slot-post" would feature the X and Z each running five routes (a curl - we'll have more on the route trees in a later, longer post), the Y running a shallow cross (2) while the slot runs a post.

It also brings the notion of the X, Y and Z as more defined positions. The X, or split end aligns to the left of the tight end, on the line of scrimmage. He's typically a bigger, more physical player because he'll more often be jammed at the line of scrimmage. Players like Boone, Wright or Dural fit this mold, or you can just picture Anquan Boldin if you want to call back to Cameron's most recent team. The Z is what is usually called the flanker. He aligns right, slightly off the line of scrimmage and has the option to go in motion. This is usually the smoother, quicker target, as he'll have some space between himself and the cornerback. Think Torrey Smith for the Ravens last year. In LSU's offense, players like Beckham and Landry (when he's not in the slot) will play the Z role. The Y will likely be the tight end, though that designation may change in four- or five-receiver sets.

5. It's not going to grab a ton of headlines, but evolution of the LSU's tight ends may be one of the more telling things about not only this offense, but this roster as well. It's no secret that it's a position that has seen next to nothing in terms of actual football touches in the last few seasons. There have been a lot of factors involved: the oft-discussed QB issues affected how often everybody caught the ball; big, burly blockers like Chase Clement and Mitch Joseph don't exactly scream "gimme the ball"; Deangelo Peterson, despite his Tarzan build, played more like Jane; plus, when your offense has to lean so run-heavy, balls for the tight ends really just mean less for the receivers, whom were already a bit starved for attention. Cameron's offense appears to be looking to change thison its own, but a a talent infusion with five-star recruit Desean Smith coming in this summer will certainly help as well.

Thus far, junior-college addition Logan Stokes appears to have the starting job locked up, but what's interesting is the talk of Travis Dickson moving to a true H-back role. Obviously this is somewhat of a well-known term, but in short, an H-back is a tight end/fullback combination player that will line up offset from the line of scrimmage in a variety of spots to serve as a lead blocker and receiver. Think guys like Jay Novaceck and Frank Wycheck, or Brad Smelley for Alabama in recent years. The role fits the shorter, slightly undersized Dickson incredibly well, and it could also provide a much faster path to the field for Smith when he arrives this summer. H-backs can help with formation leverage in the running game and create mismatches in the passing game, including for other players, by shifting strengths and defensive responsibilities. Dickson has been relatively unused during his time at LSU. He lined up out wide a couple of times throughout the season, but it seemed largely just for formation purposes, as he saw few looks. And then suddenly, he exploded versus Ole Miss, catching his entire season's worth of balls in that game. From then on, Mettenberger seemed to target him a bit more, but was never quite able to connect. Dickson doesn't have Smith's big-play potential, but he's flashed some nice hands and could be a solid safety valve/red-zone target.

Stokes and sophomore Dillon Gordon are taller, heavier blocker types that fit the typical tight end model. Big, monstrous-looking guys. The former shows some nice hands in his JUCO highlights, but was largely recruited for his physicality. The latter, from some reports, has some very soft hands. Big mits that just seem to absorb the football, from what I've heard, but he's practically a skinny tackle, and will struggle to get open against SEC defenses. But the world needs blocking tight ends as well, and so does this offense. What's also important will be for all of these guys to rotate, both at tight end and H-back, because even when the fall arrives this team will only have four scholarship tight ends on the roster.