Comparing Alex Bregman and Austin Nola's freshmen seasons at short stop, a look at Jacoby Jones' turn around, and examining the impact of Christian Ibarra

Enough has already been written about Alex Bregman's terrific season at the plate. We knew coming in the kid would be good with the bat, but no one had a sniff of a clue that he would have such a tremendous year. However, it was always said that there would be a bit of a drop off defensively with Bregman replacing Austin Nola. And the numbers do show a slight drop off in efficiency. Bregman has committed 12 errors as a freshman in 52 starts for an error rate of 0.23 errors per game. Nola started 36 games as a freshman and committed 6 errors, an error rate of 0.17 per game. Bregman has a fielding percentage of 0.945. Nola's was 0.960. This isn't a knock on Bregman at all, his defense has been very good all year. He has committed some costly errors at times, but he has been as good as a replacement for Austin Nola as we could have hoped for. Nola will be the defensive benchmark for LSU shortstops for some time, and that's a tough standard to meet let alone exceed.

Jacoby Jones has had a tremendous turnaround from his mid-season doldrums at the plate. You can see in the chart below just how hot Jacoby was to start the year, how he came crashing down rather quickly, hit rock bottom, then figured things out. He did have a slight drop off in production against Texas A&M last weekend, but his overall turn around has been great to see. The best thing is that Jacoby is hitting with power again. His slugging percentage is consistently in the 0.400-0.600 range over the past few weeks. He can now protect guys in the middle part of the order, so it is less likely to see teams pitching around the Bregman/Katz/Rhymes/Ibarra line of destruction. Ideally, he should hover in the 0.250 to 0.350 part of the chart for his batting average. If he does that, this team will be in great shape. 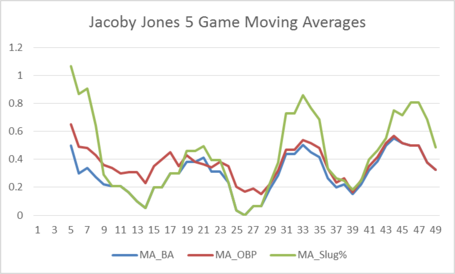 Speaking of the middle part of the order, Christian Ibarra is having one hell of a year at the plate. He has been the model of consistency. His moving averages are roughly flat throughout the year, there are almost no peaks or valleys to his game. He has provided protection for Katz and Rhymes by punishing opposition when they pitch around those two. His batting average is 0.307 with runners on base, further proving that it is not a good idea to pitch him in the middle part of the lineup. He also has good pop with his bat. Ibarra's 5 home runs have him tied for second most on the team with Jones and Bregman, and his 39 Runs Created is third behind Bregman and Katz. 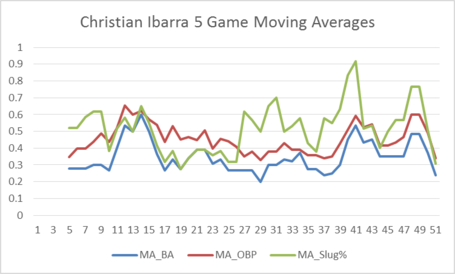 Ibarra has also been a fairly solid third baseman, but like Bregman we need to see how his defensive compares to Tyler Hanover last year. Ibarra has a slightly lower fielding percentage at 0.924 to Hanover's 0.939, and his error rate is slightly higher at 0.20 per game compared to Hanover's 0.14. Like Bregman at short stop, this is a some what expected drop in defensive efficiency, but it is nothing to get overly concerned about.

Overall, the team is in good shape heading into the last regular season series. The Tigers are hitting 0.310/0.394/0.439 as a team and have fielding percentage of 0.981. Right now, LSU needs to be in control and maintain mode before hitting the post season grinder. If they can maintain their production and consistency, they will make a deep run in the SEC and NCAA tournaments.

I'll have an update on the pitching later in the week. Stay tuned!