So here we are, at the final weekend of the year and playing for approximately nothing. LSU cannot win the SEC and has already won the West. A national seed and a home regional are a virtual certainty. Really, this is just a chance for this year's team to take a final bow for a great regular season before the real season begins, and we all get down to the serious business of adding another date to the Intimidator.

Ole Miss has secured a spot in Hoover and a place in the postseason as well. They have just as little at stake as LSU does, but I'm sure we'll find some way to gin up some hatred. I'm not sure how, but we'll manage. 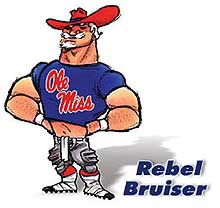 Here is your quick reminder that this actually happened. You are welcome.

William Faulkner (author of books I don't understand, but pretend to)

Because this weekend is more of a victory lap for one of the best teams in baseball, this week's musical selection is of one of the best bands on the planet right now. Thre's too many bands in the world making music designed for you to listen on your headphones, in your own little world and there's not enough bands who can crank the amps up to 11 and rock your f'n socks off. Until you've seen a band in which the bassist will stage dive and continue to play while crowdsurfing, well, you haven't really seen a great rock n roll show. They are from New Jersey, but I don't think we should hold that against them. Every so often, Yankees have a decent idea. In the spirit of the best baseball team, I give you the greatest band. And also a tribute to our beloved opponents, the Rebels: "You'll always be a loser, and that's okay!" Titus Andronicus - No Future Part Three: Escape From No Future

This is a team that wants to beat you with its pitching. Also, if you're not excited for the season finale, in which Bobby Wahl and Ryan Eades should have an epic pitching showdown, I don't know what to tell you. How often does the last game of a series have the best pitching matchup, and then have that on the final day of the season? Sign me up. Don't think it is just the starting staff which is excellent, it is the bullpen as well. Brett Huber (1.80 ERA, 11 saves) is one of the best closers out there, and the pen is full of guys who make outs. There's another six pitchers with at least 15 IP and an ERA under four. Just like LSU, there are almost too many options in the pen. The team has a staff ERA of 2.92, and that's no fluke. This isn't the best rotation in the SEC, that would be Arkansas, but it is the best top to bottom staff. When the Rebels win, it is because the pitching came through... and Ole Miss has won a lot more than they have lost.

This is a top heavy offense. Stuart Turner is an amazing hitter, and then there is a collection of guys, none of whom are slugging over 400 and only one gets on base at a 400 clip. It's definitely a case of Don't Let Turner Beat You. Easier said than done. I wouldn't call their offense terrible, but it is certainly not scary. There's no big bat lurking on the bench, and most of the players get on at a decent clip with just a smidge of power. When Ole Miss scores runs, it is by death by a thousand paper cuts. No one is a downright automatic out, so rallies can come from the back of the order. And while Turner is their leading run producer, he is not doing it in overwhelming fashion. The whole lineup is contributing.

While we always want to beat Ole Miss because they are so Ole Miss-y, LSU is taking this weekend so seriously that Mainieri is resting his ace starter for the postseason. The Rebels are too good of a team to beat with one armed tied behind your back. You have to think the Rebels will take at least one game this series, but it's also up to the bats and the rest of the staff to pick up the slack and defend the home field. Let's end the season on a high note, before the next season begins.