Looking at what the starting pitching does well, what makes them effective, and potential areas of concern.

Here is a breakdown of the various event types that happen with our starting pitching. You have ground out rate (GO%), fly out rate (FO%), walk rate (BB%), strike out rate (K%), and hit rate (H%). The first chart is the complete season totals and the second chart is exclusively SEC opponents. 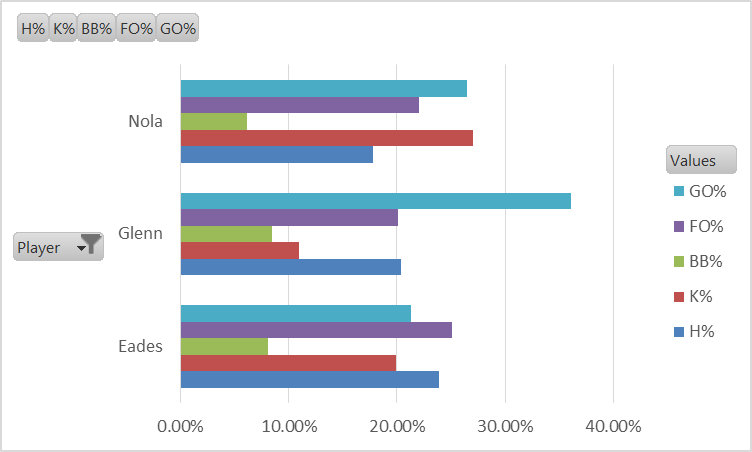 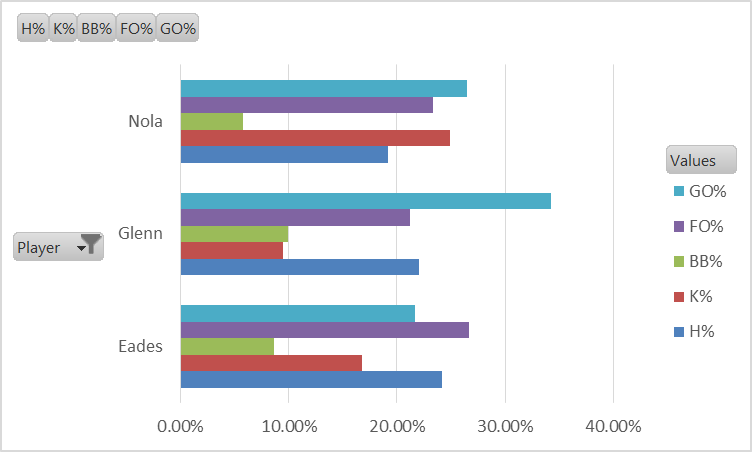 Aaron Nola is the most balanced player in the LSU rotation. Nola gets his outs almost equally between strike outs, ground outs, and fly outs with all of them being above 20%. I like that his strike out rate is high because it means the ball is not in play, which reduces the chances of a hit or error. Out of 333 at bats against Nola, only 95 (28.5%) have had runners on base and 46 (13.8%) have had runners in scoring position. Nola limits base runners, which limits scoring opportunities. This is how he has managed to be effective all season. There is no glaring flaw or area for concern with Nola's stats.

Cody Glenn has been the least consistent starter for the Tigers, but there are some interesting things about his stats. Glenn is the most consistent ground ball pitcher we have. The majority of his outs (36%) are ground outs. That number holds when you control for SEC opponents. Usually this leads to less extra base hits, but that hasn't been the case with Glenn. He's given up 11 extra base hits, which is tied for the most with Ryan Eades. Out of 275 official at bats against Glenn, 112 (40.7%) have been with a runner on base and 62 (22.5%) have been with a runner in scoring position. Glenn benefited from beating up some weak opponents early on. If you control for just his SEC starts (the second graph) his numbers are less impressive. His hit rate is above 20% and his walk rate is above 10%. Glenn needs to limit walks and maintain his composure if the Tigers want to make a deep run in the post season.

Ryan Eades pitches under the most pressure of any of the Tiger pitchers. Runners are constantly on base against him. Out of 313 official at bats against Eades, 145 (46.3%) are with a runner on base and 84 (26.8%) are with a runner in scoring position. The good thing is that Eades is not giving up a lot of walks. His walk rates are below 10% for the entire season and when controlling for SEC opponents. So a lot of this could be attributed to a combination of two things, lack of command/control with balls in the strike zone and bad luck. One can be corrected, the other you can't control. His strike percentage is high at 66.6% with only one start below 60%, which means Eades is hitting the strike zone, just not the right part of the zone. In starts where Eades is effective, he has a WHIP somewhere around 1.0 to 1.300 and a Batting Average on Balls in Play (BABIP) around 0.300. In his two bad starts (Arkansas and South Carolina), he had a WHIP above 2.0 and a BABIP of 0.500. He is more biased to fly balls than the other starters with a fly out rate around 28%. As long as Eades has solid command and is locating his pitches properly, he will give up a few hits/walks since he is primarily a fly ball pitcher but limit the damage to only a few runs per game. If his command/control is off, opponents can get to him early and score in bunches.