Now, where did we put those brooms?

Things haven't gone precisely as planned for the Aggies in their debut baseball season, which I'm sure most A&M fans would gladly trade for their football success. You won't catch too many Aggies complaining about the trade, but they did think they would do a better job this year. However, they can still rally and make the NCAA tournament, which makes them a very dangerous opponent this weekend. The Ags desperately need wins.

That is the profile of a bubble team, and likely one that is on the outside looking in. the Aggies need to get that SEC record closer to .500 and that RPI needs to get into the 40's or so to be a viable candidate for an at-large bid. The committee hates taking more than 8 SEC teams, so they need to improve their profile to be more attractive than Kentucky, the 8th place team. 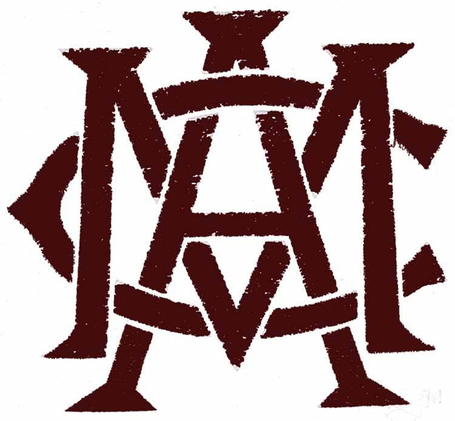 How awesome is that? That thing looks like a cattle brand. Hell, it probably was. I like the current A&M logo, but I'm partial to clean, uncluttered designs. The block ATM is a classic.

Norman Borlaug (winner of Presidential Medal of Freedom, Congressional Gold Medal, and the Nobel Prize, which is like the EGOT of academia)

Davey Johnson (1997 AL Manager of the Year, fired that offseason by Peter Angelos... no, I'm not a bitter Orioles fan, why do you ask?)

Robert Neyland (has a stadium in Tennessee named after him)

Texas, of course, has more than its fair share of great musicians. Now, if I were the type of guy to just enrage our rivals, I'd make our pretentious music video some band from Austin. Close enough, right? On top of a famous indie scene in Austin, Texas has given birth to two famed subgenres of country: red dirt and outlaw. Houston is home to a fabulous hip hop scene as well. What I'm saying is, there's a lot of great music in Texas, though A&M is known more from the country twang than the pretentious indie rock. But have no fear, there is some A&M approved country music for the scarf wearing crowd. You don't get much more Texas than the legendary T-Bone Burnett, who is pretty much worshipped by anyone who has even a passing interesting in country music. He's best known as a producer, and while he tends to work with high profile acts these days, or lending his famous name to movie soundtracks, he did get together with another Texas legend a few years back: Steve Earle. Earle is more rock n roll than just about anyone else on the planet, and he's been churning out great music for a few decades now that usually exposes just how lame both modern country and rock truly are. Anyway, get him together with T Bone Burnett, and good things are gonna happen. So in the spirit of Texas, here's Steve Earle ripping fake Texan George W Bush (he's from Connecticut, people) a new one: Steve Earle- Little Emperor

Parker Ray has pitched his way into the rotation, and this will be only his third start of the season. This is a top heavy staff, as there is only one pitcher in the pen who has thrown 10 innings and has an ERA under 3.00 (Jason Jester: 2.55 in 35.1 IP). The key for LSU is to get to the starters early, and then expose the soft underbelly of the bullpen. Mengden's ratios are pretty darn great, so I expect he'll be a hard guy to rough up, but Ray and Pineda's underlying numbers are not as scary as their ERA's. Also, for the first time in what seems like forever, LSU will go up against three righties in one weekend. The book on LSU has always been throw the lefty at them, but the Aggies just don't have that option. This is a solid staff, but not a great one.

As a team, the Aggies slug 366. To put that in perspective, LSU gets on base at a 395 clip and slugs 442 as a team. When I say the Aggies have almost no pop, I mean it. What they can do is run. The Aggies steal at 69/92 rate, which is both a lot of steals and at a good success rate. They will sacrifice a lot, and be the most buntastic team they possibly can. You know how I feel about that, and it shows in the 4.38 runs they score per game. They try and keep the score low and win the game by manufacturing the winning run late. All I can say is, good luck with that.

They really should be. LSU has gotten through the toughest part of its schedule with a 4-2 record, which isn't as impressive when you realize we lost our first series of the year. But after a sweep of Florida, it's time for LSU to put the foot to the floor and start getting into full postseason form. The Aggies are the kind of team that can give you fits, but you are always one big inning away from blowing their doors off. I just don't think the Aggies can put up the amount of runs needed to compete with the LSU offense. However, their best chance to win will be tonight's game on national TV. LSU will hold Nola for his usual Friday start so Cody Glenn gets to go up against the Aggies ace. We are conceding the first pitching matchup in order to have a massive edge in the next two games. If Glenn can scrape out a win, this weekend could get ugly for the Aggies.