We're still about a week away from LSU players reporting to camp, so the amount of actual LSU news to talk about has hit rock bottom (which is better than the alternative, I assure you). But that does mean the slightest rumor becomes the most interesting thing to talk about. Some guy named Pat White claimed on twitter that Zach Mettenberger has "a potentially serious back injury. He doesn't run or lift at practice." None of the established LSU media even acknowledged the rumor until TigerSportsDigest, the LSU Scout site, put up something brief about it. Looking back at SEC Media Days, I did not see a single report that he appeared injured or in pain except for one seemingly random question about his shoulder. Given that this story is staying behind paywalls, it's pretty safe to say that at most whatever is going on with Mettenberger's back isn't really a concern, or else everybody would be talking about it.

Whether by coincidence or to make a tongue-in-cheek statement, the official LSU football twitter account released the above photo, along with a few others, of Mettenberger and other players standing around taking pictures for this year's gameday program covers. As you can see, the uniform changes we noticed in the Peach Bowl appear to be here to stay. 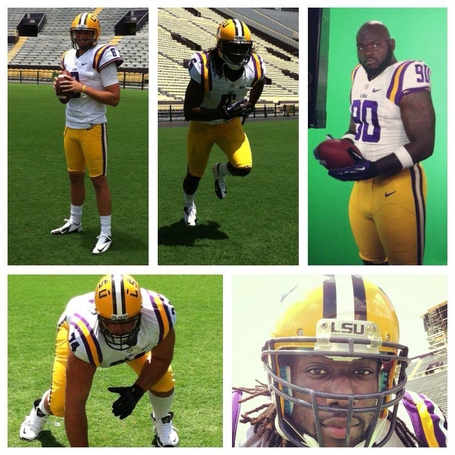 Earlier this week, in attempt to overload us with even more of the same offseason questions, a bunch of SEC coaches including Les Miles went up to ESPN for a day to appear on various shows. I've posted Les Miles' one on one interview with Chris Fowler below. One of the more interesting things that happened was Nick Saban breaking down a few plays from last year's championship game, which Smart Football has dissected into a really great look at how Alabama works on the field.

Tiger Rag's football preview hits stands soon, and it looks like it's going to be very worth the read. Check out this preview of editor Cody Worsham's very extensive interview with Cam Cameron. If you look carefully, the play Cam is diagramming in that picture might look familiar. Cameron was also on ESPN Radio in BR this week, emphasizing that LSU is going to be "...a vertical passing team. We're going to throw it over your head on every down if we can."

There's been a ton of ink spilled from media days, so here's a quick roundup of a couple articles:

LSU's New Offense is About Simple Changes (the Advocate)

A roundup of the best quotes from Media Days (SB Nation)

And on a less serious note, add "trafunktery" to the Les Miles dictionary.

All this talk of separation brings with it many unanswered questions. A big one is what to do about programs like Boise St. who seem to be stuck on the outside, but worthy of inclusion.

The other big national topic of the last few days is how different conferences game officials seem to have different interpretations of the NCAA's new rules regarding hits to the head and mandatory ejections. The head of officials for the ACC says that the famous hit Jadeveon Clowney delivered in this past year's Outback Bowl would have warranted ejection, while other officials aren't quite able to decide. Like the celebration penalty changes of the last few years, expect this to become a fiasco in the coming season.

USA Today has an interesting interview with Clemson CB Darius Robinson, one of the five active college football players who has joined the landmark Ed O'Bannon likeness rights lawsuit against the NCAA.

Should for-profit colleges be allowed to join the highest ranks of NCAA competition? That's the question brought up by the ADs of the P12 as tiny Grand Canyon University begins it's transition phase into D1.

Summer College Baseball is starting to wind down as the US Collegiate National Team completed a 5 game sweep of Cuba to finish their season with a 7-3 international record.

This is the most horrible article ever written. I weep for our northern friends.

Tailgater's take note: there is some new construction being done on the south end of Tower Drive to remove parking spaces.

Happy Birthday to our favorite cat, Mike VI, who turned eight yesterday and enjoyed a cake of sorts. 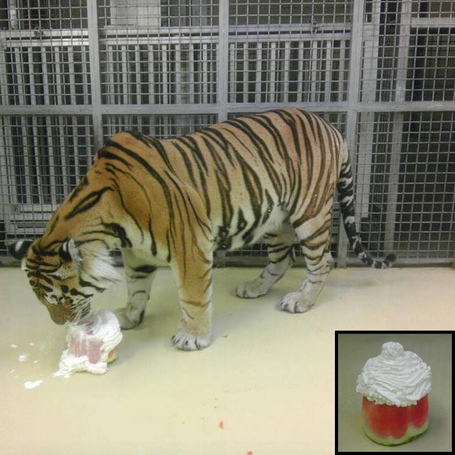 Could be the best picture of the day. @LSUCoachMiles takes a pinch of #ESPN grass. @lsufball pic.twitter.com/bpykyuOXQA