Has the offseason finally reduced us to madness? You tell me.

I've never really done a jambalaya recipe in this space. A variant. But not the genuine article. I've been looking for a reason to do it, and then it came to me. In a dream, if you will. I may, or may not, have been feverish at the time. Frankly, that's none of your concern.

I've heard of people substituting hotter peppers for the traditional green bell peppers before, and my wife had recently used some canned chipotles with adobo to make an enchilada sauce. The thought seemed too intriguing to pass up, and then an old idea of using Abita Turbodog in the steaming liquid of a rice-based dish came to mind as well.

Truthfully, a big reason jambalaya is such a popular tailgating dish, is that it's a relatively easy and cheap way to feed a lot of people. This version is a bit more complex, and due to higher quality ingredients, not necessarily the perfect tailgate dish. Besides that, the result, frankly, is not for the faint of heart, or the weak of stomach. This jambalaya is beyond the laws of man. It looks out into the abyss and smirks at its own reflection. It as another level of flavor. It is...

Note: I had some leftover pulled pork from a 4th of July barbecue that I substituted here. I gotta tell ya, it made a huge difference. But use what you have on hand. On the salt - I've always been taught to over-salt slightly when the time comes, because you'll lose some in the steaming process. In this case, I overcompensated slightly. My theory is that I didn't take into account the saltiness already inherent from the pulled pork, the chicken stock and the chipotles & adobo.

1. In a large Dutch oven, at least 8.5 quarts, brown the ground/pulled pork over medium heat until the fat begins to render slightly. Add the diced onions and cooked until wilted. If you do use pulled pork, you may need a little extra oil, maybe a tablespoon or no. Stir occasionally. 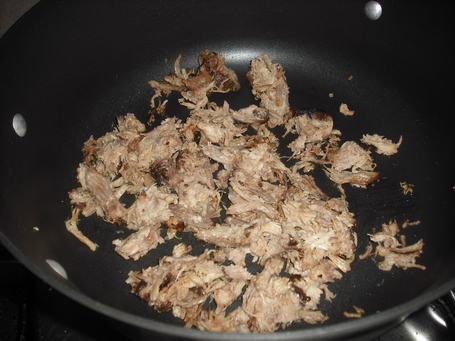 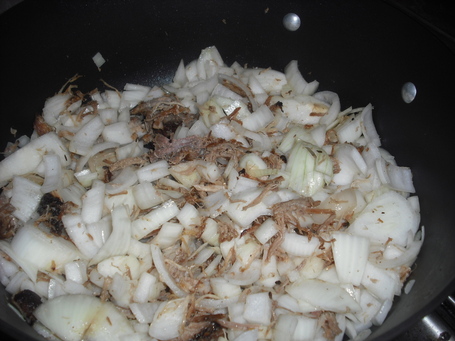 2. Once the onions are good and wilted, add the diced pork and continue to brown. The fat will again render off, and you'll want to wait for most of the liquor to evaporate before the next step. 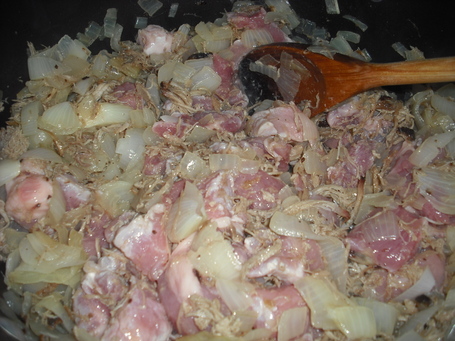 3. Add the minced garlic and all of the sausage, stirring well. Again, cook until you see some more liquid form in the pot and reduce by about half or so.

4. Add the peppers, stirring well, and cooking until wilted. 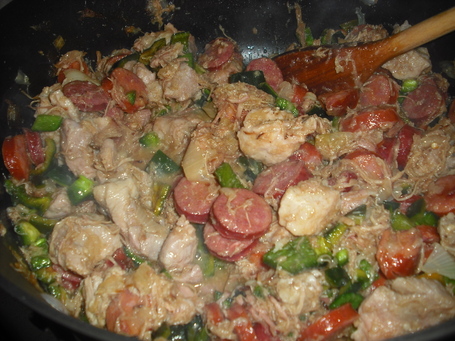 5. While all this is going on, spoon your chipotles/adobo sauce into a food processor. Add a few table spoons of chicken stock just to give it a little more liquid, and pulse until relatively smooth. 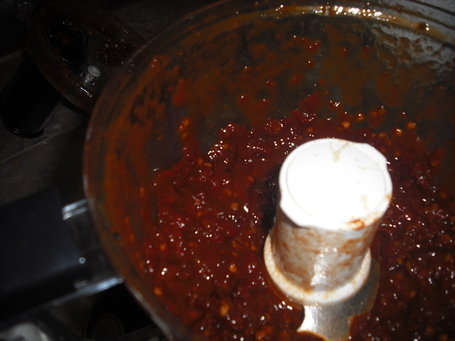 6. Add the ro*tel into the pot and stir well, then add the beer, the worcestshire, the thyme and the rosemary. 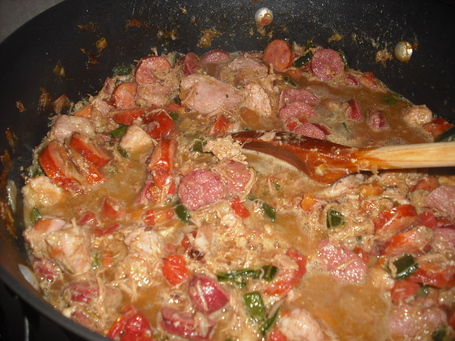 7. In a large bowl or pitcher, combine the processed chipotles with the remaining chicken stock and mix well. Add to the pot and mix well. Bring to low boil, tasting and adjusting seasonings as needed. 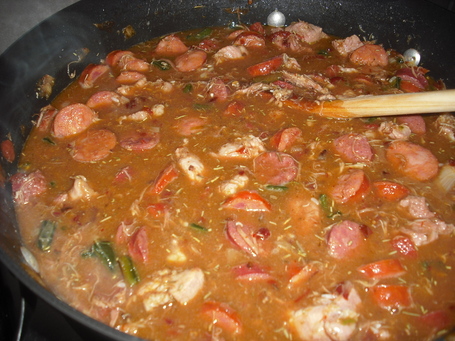 8. Add the rice, stir well, reduce heat to a low simmer, then cover the pot well. Simmer until the rice is cooked and the liquid is absorbed. It may take an hour or so. Stir every so often to make sure the seasonings are rotating in the pot well. 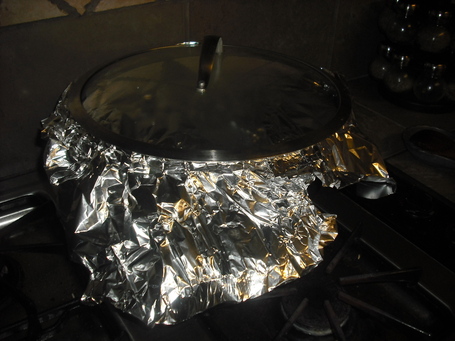 This will feed at least 10-12 people well. The result is a bit of a funky combination of smoky, sweet and very spicy. I oversalted mine slightly, but so long as you're mindful of that, this is epic. 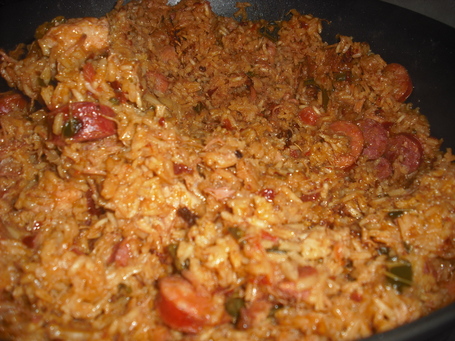 **Editor's Note: With gameweek about to start this will conclude the recipe series for now. Some special editions might pop up from time to time though. But still -- GAME WEEK Y'ALL.**