All hail the Mettensavior edition

When we talk about ATVSQBPI, we're used to some other team's quarterback breaking the scale. We're used to seeing some guy from Oregon or some QB playing a Sun Belt squad racking up those gaudy stats which completely dwarf everyone else's. Well, I present to you Zach Mettenberger: 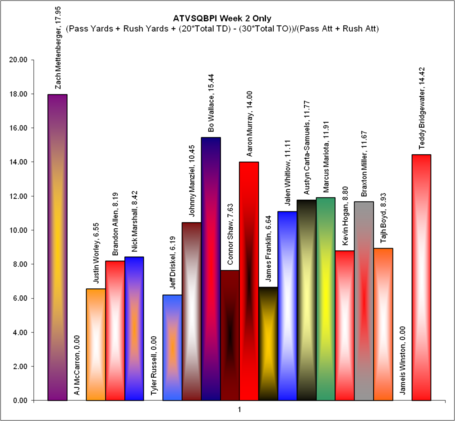 The Mettensavior has finally arrived. OK, it was against UAB, which isn't a Sun Belt team, but they do a pretty good impression of one. But isn't it nice to see an LSU QB with a big purple line on this thing for once? It wasn't the "best" performance of the weekend, quality of competition still matters, but it is a great sign to see LSU just demolish an inferior foe.

However, the best performance of the weekend was clearly Aaron Murray's 14.0 against USC. Georgia didn't win the SEC East this weekend, but they took one giant step towards doing so, and it was keyed by Murray's big game. That's what big time QB's do. They play their best games on the biggest stage, and this was the game on Georgia's schedule. Murray has a bit of an undeserved rap for not showing up in big games. He's usually played well, just not well enough to win. This week, he left nothing to chance.

And how the hell did Jeff Driskell score a 6.19? Can you believe he threw for 291 yards? Yeah, neither can I. That game was brutal to watch, but his numbers didn't look horrific at the end of it. This goes to show that numbers can tell you some things, but they can't tell you everything. Because Driskell looked awful. 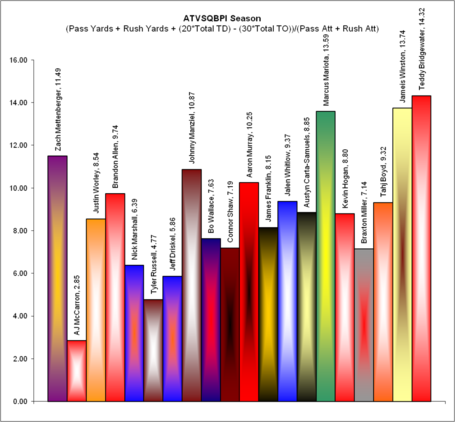 One more note on Aaron Murray. He's got a 10.25 and he has played, by far, the most difficult schedule of any of these guys. I hate handicapping the Heisman this early, but Murray was my preseason guy and I see no reason to back off of that. He has taken his game to the next level.

Looking at the other guys above 10, we've got two people we expected and two we didn't. Terry Bridgewater is going to put up video game numbers all year against the traffic cone defenses he will face and Marcus Mariota is playing Name That Score with Oregon's offense. But James Winston is just a freshman, albeit this is just one game's numbers. And there's the Mettensavior again. Let's see if he can stay in this rarified air.

Most guy's numbers are severely inflated right now because of schedule effects. When even Kentucky's quarterback is flirting with a 9.37 rating, we know not to take these numbers too seriously. It's early, and teams are taking the chance to run up some big numbers on outmatched foes. Even Kentucky. 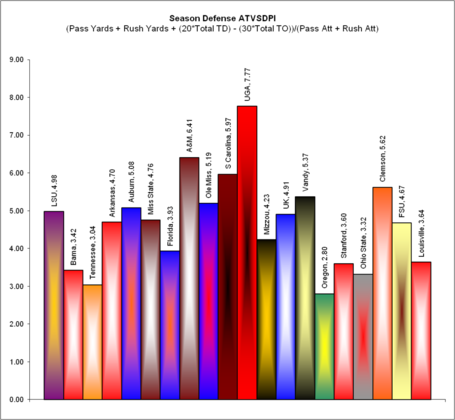 We'll cut Georgia a little bit of slack given the teams they have played, but it's not a good sign that they are allowing the equivalent of 7.77 yards per snap. If the Dawgs are going to rally, and they are far from out of national title contention, they need to tighten that defense up. And start playing teams from somewhere other than South Carolina.

The interesting thing here is that for all of the hype Oregon's offense gets, look at how great the defense is. Oregon's defense doesn't need to be Alabama's to win the title, but right now it's been even better. And Oregon didn't get to play Virginia Tech.

I do enjoy early season quirks like Tennessee boasting the SEC's best defense, mainly based off forcing about a million turnovers against Western Kentucky. That's not going to last, but it is still cool to see Tennessee aspiring to competence again. LSU's defense hasn't been porr by any means, but right now, it's been middle of the pack. And middle of the pack is not something that we're used to around here. Chavis needs to tighten that up as the season gets ramped up. We aren't at Code Red just yet, but it's no accident the coaches are talking about some personnel changes on defense.