Life as an LSU Tiger Bandsman: Do It Again

Artists do not create new works in a single day. The LSU Tiger Marching Band does not mold its Saturday nights in Tiger Stadium in one day either.

Share All sharing options for: Life as an LSU Tiger Bandsman: Do It Again

By now, the newness of the semester and football season has worn off. Members of the Golden Band from Tigerland have settled into their studies (heh) and a schedule of rehearsing four days a week. Tuesday through Friday afternoon finds Tiger Band practicing at the field (simply known as the band field) behind the New Band Hall on Aster Street. Each of these rehearsals lasts 90 minutes, meaning the band gets in six hours of rehearsal a week for each home game, in addition to the usual Saturday rehearsal. They're out on the field, rain or shine; since this is southeast Louisiana, both often happen in the same day. Gamedays don't wait, so the band does what it must to put on shows with consistency each week.

Honestly, the band needs all of the time they can get. Directors and other staff members prepare between four and six different halftime shows each football season, with some being repeated throughout the course of the year. Sometimes they'll have two or more weeks to put a show together, allowing section leaders and bandsmen to focus on the minutiae of drill, music, and choreography. Other times, they're tasked with putting together a show in four days time. While this may sound daunting - and it can be - it's just one of those things you get used to during your tenure with the band. Pregame is also a big part of these rehearsals - we'd run it on Thursdays and Fridays usually - but the major objective is to get each halftime show ready.

The theme of rehearsals with the Golden Band from Tigerland is redundancy. Practice makes perfect, and repetition is the name of the game. Every musician knows this, and embraces it. For a Saturday night performance, members run through music and drill an untold number of times over the course of the week until everybody gets it right.

This is about as compelling as opening and closing a door several times in a short period of time. You start, you stop, you start again only to quit halfway through. It can be frustrating, but as the cliché goes, practice ultimately makes perfect. You do this week in and week out for an entire semester. While the music and the drill change every few weeks, it all quickly becomes routine. I hesitate to say that it can become boring, but it can certainly become monotonous. Start. Stop. Start. Stop. Go back to the beginning, do it again. Be it with feet marching or fingers pressing valves and keys, it's like 90 minutes of stop-and-go traffic. Move when you must, stay put the rest of the time. It's not like you couldn't chat with those around you during practice (I was guilty of this) or slack off and not give "maximum effort" (also guilty) all of the time, but it could wear thin.

As I said previously, a majority of rehearsal time is spent working on that week's halftime show. During my time with the band I always felt that the halftime show was an afterthought to much of the crowd, despite us focusing on it with much of our rehearsal time. Everyone wants to see and hear Pregame - that much is for sure. But the stands always seemed a little thinner at the half, with good reason usually. By then the crowd is either drying out or close to breaking the seal, so a respite from the Louisiana heat is necessary for some fans, even if they don't happen to be drinking. I never blamed those who left. As someone who makes up for the tailgating he didn't do in undergrad, believe me, I completely understand.

But those who stay are rewarded by getting to see and hear some cool moments. During the 2009 game against Vanderbilt, the Louisiana Music Hall of Fame inducted the LSU Tiger Marching Band. We were performing a show with music written by Louisiana artists in the middle of the rain, purple raincoats and all, with the induction happening in between tunes. Those who remained in the stands got to see something that I am still absolutely proud I was a part of. 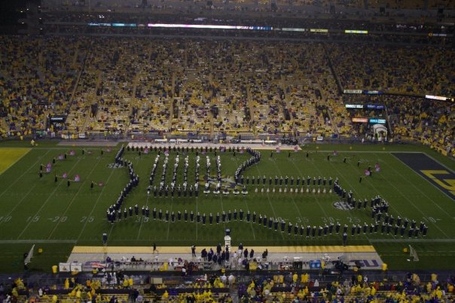 Those of us on the field are rarely able to see what the final product looks like until after the game, but we knew how good it looked based on the screams from the crowd. If I had to pick a singular thing the band formed while I was in it, this was it, no contest, it felt absolutely wonderful to finally perform it. We worked on this set for a long, LONG time, and the reaction the raucous, rain-soaked crowd gave us was well worth it.

However, the best moments aren't always the loudest ones. On September 10th, 2011, I remember the stands being more full than usual. We had been working on something special in remembrance of the tenth anniversary of the September 11th attacks. I don't think the crowd knew about it in advance, so I chalked it up to coincidence. But for some reason, I couldn't shake the feeling that they knew what was coming. We had planned a show of patriotic music to commemorate the occasion. During the heart of the show, we were set to perform a rendition of Amazing Grace that I won't soon forget (skip to 2:45 below, or just click here).

It was a wonderfully reverent moment. The swell of crowd noise during a ceremony for an LSU alumnus who had passed away in the attack on the Pentagon quickly quieted, as if someone had hit a mute button. I had never heard a full Tiger Stadium so silent, and for some reason I doubt I ever will again. I was so in awe of the moment I had to stop playing to take it all in. With my vision obscured by sweat and the brim of my hat, it felt as if I were living in a painting, a wonderful mass of color that sat in absolute stillness.

Nothing but the music moved. It is truly hard for me to find the words to fully describe how this moment makes me feel. "Beautiful" falls short. All I can say with certainty is that something truly wonderful happened that night. After a long week of work, we put together an unforgettable moment, one that I'm glad we shared with so many.

Those moments make the hours of redundancy completely worth it. The thought never occurred to me until after my tenure with the band had ended that the nature of art is repetition. A painter makes thousands of brushstrokes and splatters before the canvas bears what he wishes to have upon it. A sculptor molds marble with millions of similar chips using a hammer and chisel. Musicians practice things over and over until performing them is second nature. Each work of art is different, but the repetition of technique is apparent in the creation or performance of each.

In the case of the LSU Tiger Marching Band, a mass of individual but similar brushstrokes on the canvas of a green field move about to create something beautiful each Saturday night. The brushstrokes become more refined with each recurrence, and 325 individual points of purple, gold, and white merge into a single piece of art capable of eliciting the broadest of emotions. If it were not for the repetition of weekday afternoons, we would not have these moments, and Saturdays could not be so special. The process itself may be monotonous, but the feelings the final product of the process can bring forth are damn near indescribable - for those on the field and in the stands.

Part V of this series will appear the last week of the month.

If you are a fan of the LSU Tiger Band, you can see them perform up close and personal on Tuesday, October 29th, in the Pete Maravich Assembly Center at their annual concert,Tigerama. All proceeds from the event go towards funding the band's trip to Ireland to march in the Dublin St. Patrick's Day Parade.