5 Big Things: What UAB in Review Tells Us Going Forward

5 Big Things highlights five major takeaways from the previous game and what they could mean for LSU going forward.

Share All sharing options for: 5 Big Things: What UAB in Review Tells Us Going Forward

I love watching LSU football. I even enjoy re-watching the games, each play 3, 4, 5 times for in-depth review. But ick, this one was tough to rewatch. Not because of heartbreak. Moreso it was the type of bland, boring dissection of an outmatched opponent that makes your eyeballs roll back into your head and down your throat. A delicious cocktail of vanilla schemes, 75% effort and dragons.

But I can't complain too much. LSU did what it was supposed to do, escaped mostly injury free, and onward they march. LSU outclasses UAB in so many ways on the field, it's tough to draw any major conclusions... though I got my Odell Beckham Jr. 4 Heisman shirts printed already. So let's look at 5 Big Things heading into Kent State.

The performance of the rushing attack to date is... uninspiring... at best. As I documented in Upon Further Review, the OL continues to struggle to get a push up front. There were marginal improvements from week 1. We rushed for 4.5 YPC over the 4.1 YPC from last week. Vadal and Hawkins both looked improved as run blockers. How much of that is competition? That's what we won't likely know for another two weeks.

But I must acknowledge the dynamic Jeremy Hill brings to this rushing attack. Alfred Blue still doesn't seem quite himself. Hilliard is running strong, but still not to the explosive level we saw at the end of 2011. Terrence Magee is our second best back to date, and he's hardly posting monster numbers. But Hill is a different story. In his first action this week he posted an 8.3 YPC, the highest total for any back thus far (sure, only two games, I know). So here's some visual evidence of what Hill brings to the table. 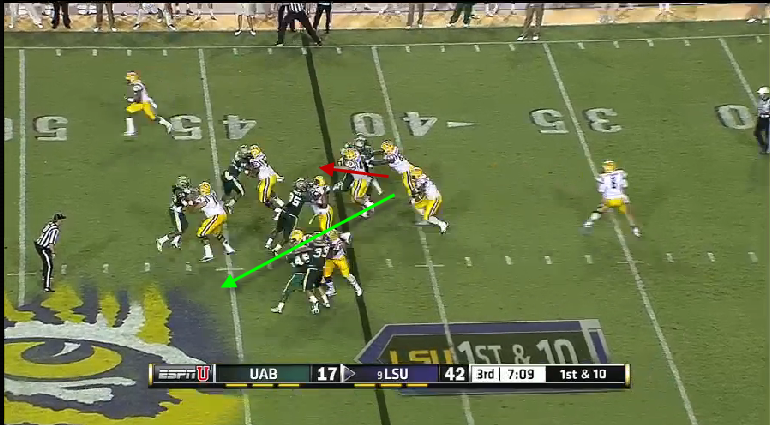 Here's an obvious example. This play is designed right. You'll see that Hawkins and Neighbors are in control of the DE and OLB to that side. Porter has his man hooked. Turner does a great job getting to the 2nd level and getting a hat on the LB. The hole is there. Except, back on the left side, look at the massive hole created due to outstanding blocks from Collins and Gordon. This time Vadal is on the 2nd level, hat on the LB. The hole on the right would likely net a 4-5 yard pick up, but Hill's vision is such that he can spot the cutback lane and then explode through it. In the above shot you'll see he's already beginning his cut to that hole.

Now, I'm sure your initial reaction may be that I'm exaggerating here. "Of course he would cut back, there's a huge hole there!" For comparison, let's take a look at a few other runs from other backs: 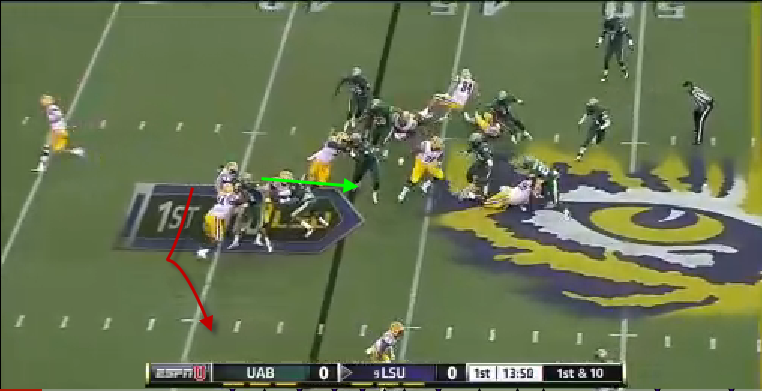 Similar play, only to the right. You'll notice it's not blocked nearly as well, but the running lane is there. Porter is 2nd level, while Hawkins and Copeland have sealed off the right side. Turner is engaged and Trai is hunting for bodies on the 2nd level. Rather than follow the inside blocks, Blue decides to bounce outside... which proves costly, as he's taken down for a 1-yard loss. My contention here is that Blue wasn't able to spot the hole through the mass of bodies, whereas Hill would likely keep that one inside the hashes and taken a nice 5-7 yard gain.

2) The Emergence of Kwon Alexander

I'll stick by my assertion that when Kwon knows what he sees, he's a force on the field. I think in the 2nd half of the UAB game you saw his confidence begin to grow. It's the moments when he's not clear what he's looking at that he looks timid and ineffective. He's probably the most physical of all the entire group, not to mention he flashes outstanding speed. Kwon was really becoming a playmaker last season before he broke his ankle. I think we're starting to see that player come around again.

LB play hasn't been a strong suit of the defense thus far. Barrow doesn't look the same. Welter oscillates between bad and terrible. Lamar Louis hasn't been any better. Chavis is still trying to find the right mix. Right now I feel as if Barrow/Louis/Kwon may be the best trio, but this is really going to come down to who puts their best foot forward as we head into SEC play. This needs to be the final week of auditions. I hope three players emerge against Kent State.

Kwon emerging as a stable and consistent playmaker should strengthen the overall core of the defense.

Jalen Collins was flat out benched last week. After a series of porous tackle attempts he found himself squarely on the bench and not for a series or two. And no other starters were summarily benched, so it wasn't a case of resting him up for the rest of the season, nor was it a Craig Loston "minor injury so no reason to risk it" type of deal either.

I've not read any practice reports this week, and while it wouldn't surprise me if Collins got the starting nod again, Miles' lunch time presser indicated that Collins (or others for that matter) don't exactly have a strong hold on their starting positions. One thing we've seen consistently under the Chavis regime is that he will play his best 11 (we can discuss the merits of D.J. Welter in another forum). There's no reason to believe Collins will simply be handed his starting spot due to seniority.

Tre White is fantastically talented kid. I raved about his potential in Better Know a Freshman, even noting that he could be starting as soon as this season. Yet, my inclination was that Tre would be our 4th or 5th defensive back, used in the slot, etc. The fact that he's already supplanted one of the starting corners is a surprise... but only a mild one.

What I really love about White is that despite his slight stature, he's physical and aggressive. Jalen Collins looked to absolutely avoid contact at all costs. That's something you can deal with when you have a guy who is an elite man cover corner, but even that aspect of his game isn't shining. White did get beat early against UAB, thankfully Austin Brown missed it, but I don't remember a single other pass coming his way and he was routinely first in line to come up in run support. Tough, tenacious, and athletic as all get out. Check, check and check.

Look for White to lock down the corner spot opposite of Mills, if not this week, then in the coming weeks.

4) Return of the Freak

Johnson, from all reports, had a tremendous offseason. He's touted as a first round NFL prospect by many outlets. While he's not had nearly the same quality of career as Glenn Dorsey, his NFL upside may actually be higher due to his unique athletic talents. But where is the production now? To date he's totaled 6 tackles and 1 TFL. Again, it's not that he's been totally silent and getting blown off the ball every snap. But I think many of us, myself included, where anticipating that Glenn Dorsey 2007 type of season.

One commenter noted that he's been seen grimacing after a few plays, nursing his shoulder a bit. There's no reports about an injury, so unsure what to make of that. Perhaps he's a little dinged up. But if that were the case, why not rest him against the UAB's and Kent State's of the world?

One possible rationale is that he's simply commanding more attention. UAB was pretty deliberate in their decision to routinely double team both he and Ego. They took their chances against our ends and tried to preserve the pocket up the middle. Both Johnson and Ego had relatively quiet nights, so I guess in worked in a sense.

Another possible explanation is one of luck. There are moments when Freak flashes that brilliant explosiveness that makes him so hard to block. As much as skill and athleticism play into the art of the sack, timing, particularly for interior linemen, is equally important. Perhaps in the coming weeks the chips will fall more in his favor and QBs will go down more regularly.

5) Odell Beckham Jr. Coming Into His Own

Throughout the offseason it became a popular sentiment to tout Jarvis Landry as not just our best receiver, but potentially the best player on our entire team. This isn't without merit, but through the first two weeks of the season Odell Beckham Jr. has officially put your prognostications on notice.

He currently leads the nation in All-Purpose Yards. He's currently averaging 27.8 yards EVERY TIME HE TOUCHES THE FOOTBALL. Obviously kick returns and the FG return skew that a bit, but if we throw all that data out, he's only averaging a measly 21.6 yard per touch. Essentially, getting Odell Beckham the football is the equivalent of traveling a fourth of the length of the field. Do I anticipate these numbers to continue? Hell no, but boy, it's fun to think about.

When's the last time LSU trotted out a true all purpose threat like this? You might even hark back to the day of... gasp... Kevin Faulk. Yes, I said it. Faulk's meaty numbers in the rushing attack likely put him on an unattainable plateau, but Beckham at least has a stake in the game. One could even argue he's the more explosive of the two.

But let's look at the LSU record Beckham is more likely to approach. Currently, Domanick Davis holds the single season LSU record for All-Purpose yards with 2,120 in 2002. Beckham has already amassed nearly a 1/3 of that total in two games. To break the record he'll need to account for roughly 168 All-Purpose yards a game for the rest of the season. Considering he's nearly double that output in the previous two games, it's certainly within reason, if not strong possibility.

But this is all a really long way of saying that Beckham has really emerged as a talent in his own right. Throughout his career he's been plagued by curious drops and lapses of focus. The interesting thing is, he's got a great set of hands... no one, not even Jarvis Landry, plucks the ball out of the sky like Beckham. ESPN highlighted how large his hands are last week.

What's even more encouraging is that he's emerging as a legit down field threat, one that we lacked last season. If Beckham can continue to be a guy that can consistently take the top off the defense, then Landry and company are going to have gobs of room to work underneath. It's going to give the LSU offense an over the top and underneath dynamic we haven't seen in years.

Oh, and not that there were really any major concerns, but don't you think All-Purpose superstar recruit Speedy Noil must be sitting back and saying, "That'll be me next." LSU doesn't have to recruit on vague hopes and promises of improvement anymore: Odell Beckham is the embodiment of what recruits can become.