Another season, another chance for us to bust out our favorite metric, invented at the ATVS Labs. That's right, it's the ATVSQBPI time. Special thanks, again, to ORTiger's hard work putting together these charts and getting me the data so I, um, don't have to do any work.

OK, so has everyone caught up? This is a group project, as the metric does not just have one author. It also relies heavily on the concepts from whatever football sabermetricians like to call themselves. We appreciate any input, and we're always tinkering on the formula. Feel free to tell us how we're stupid and how we can make ATVSQBPI better. All the smart ideas are Richard's, and the bad ones are mine.

We'll ease our way into it this year, and just look at the season totals and not worry so much about conference games. There's also, obviously, no need to isolate last week's performance from the season totals. Without further ado: 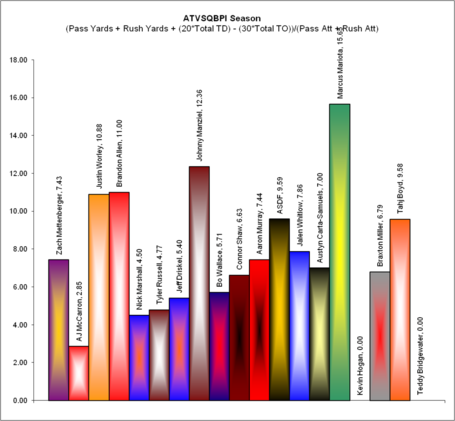 Yes, we know we need to add Jamesis Winston to the chart. The data was compiled before we knew he was going to be awesome. Also, this does not include the Sunday games, so we missed out on Bridgewater's numbers. He did not score a zero, we just have him at Did Not Play. The results are only through Saturday.

With those caveats out of the way, we can then throw out Marcus Mariota's ridiculous numbers because the Ducks didn't play a team with a pulse. So... look who is #1 already. Johnny Manziel didn't play the first half or much of the fourth quarter, and sure it was Rice, but he didn't miss a beat from last year. He came in, shook off whatever rust he had, and immediately torched Rice's defense. Sure, it's just Rice, but the Owls were giving A&M fits in the first half, and Manziel crushed whatever faint hope they had of a victory.

The other two impressive performances come from Tahj Boyd and our very own Mettenstache. The quality of Georgia's defense is an open question, but let's assume that it doesn't outright suck. At worst, the Dawgs are a below average SEC defense. Boyd didn't light up Alabama, but he also wasn't playing against Rice. Boyd put up a huge number, driven primarily by the fact he scored five touchdowns. Take away the touchdowns, he still scored a 7.26. He had a very good night without the scoring, but the touchdowns made his performance truly superlative.

Zach Mettenberger equaled Aaron Murray's night, only in a winning effort. This also demonstrates how the metric doesn't overly punish a low completion percentage so long as a guy is getting good yardage when he does connect. Mett gained 252 yards on 32 attempts, which is a very solid night against a defense of TCU's caliber. Aaron Murray put up a nearly identical ATVSQBPI but got there in a totally different way: 323 yards passing coupled with 2 turnovers.

Take care of the football, people. Murray essentially loses his yardage advantage by giving Clemson the ball twice, while Mett never turned the ball over. Turnovers are a killer, especially in a close game like the one Georgia played in. Mett made the big play, Murray didn't. Simple as that.

On the low end of the scale, it's shocking to see AJ McCarron down there. He's been one of the top performers in the ATVSQBPI, consistently gaining yards while not turning the ball over. He's usually the model of efficiency.

Well, against Virginia Tech, he was pretty awful. 110 yards passing with an interception does not get it down. Throw in -23 yards rushing from sacks, and you have a pretty terrible night. Now, it's hard to get too down on a guy who won by 25, but it merits watching. Either VT has a great defense or Alabama has some serious issues on offense. I'm leaning towards option A, with a little bit of "it was a blowout so we kept things under wraps" thrown in.

Now, let's look at the defenses: 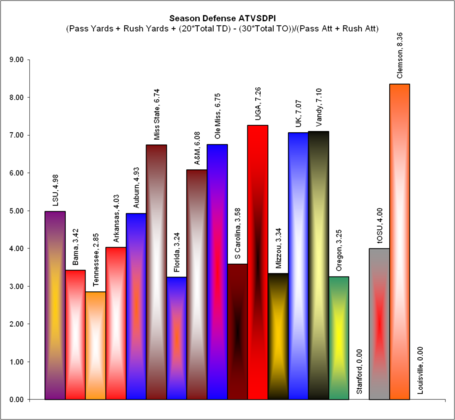 Yeah, Clemson put up the big offensive numbers, and then gave it back on defense. Since we know Murray had a good not great game, we can figure it was the Georgia running game breaking the scale here. They will do that to a lot of teams.

Of the teams over a 6.0 on the defensive metric, the biggest concern is from Texas A&M. OK, aside from Kentucky, but let's just assume they stink and have abandoned all hope after losing to Western Kentucky. Vandy and Ole Miss traded body blows from offenses that looked pretty good, and MSU largely held an explosive OSU team in check. That all makes sense, but Rice? I know guys were suspended, but Rice marched up and down the field on A&M, and that can't be a good sign.

LSU and Auburn both put forth good defensive efforts against offenses that should be able to move the ball this season. Neither performance was great, but both were pretty much what you need from your defense to win games.

I'm genuinely surprised to see Arkansas down in the low numbers, flirting with competency. UL-Lafayette can play pretty well, and the Hogs shut that offense down completely and never let the upset bid get going. Toledo was also a chic upset pick, and Florida strangled the life out of them. Both teams earned easy wins, keyed by their defense's performance.

However, the star of the weekend was the Alabama defense. Now, I know Virginia Tech's offense is terrible, but it's not THAT terrible. Outside of one long run, the Hokie offense was completely inept. Alabama staked their claim that while the offense may not be as a great as advertised, the defense could be the best in the country. People are just glossing over how great the Bama defense played in an effort to raise questions about their offense. That would be missing the story. Bama's defense is legit.