There's many more reasons to hate UAB other than the fact that they beat LSU that one time. I think.

Share All sharing options for: Ten Reasons to Hate UAB

On September 5th, 2000, UAB beat LSU by a score of 13-10. It was the third game of the Nick Saban era, and dropped LSU's record to 1-2. To this day UAB leads the series between the two teams 1-0, and that should be worthy of your anger alone. However there are many other reasons to hate UAB. Here are ten.

1. UAB has a class in its theatre department that teaches students how to show up uninvited to parties of people they have never met, only to take all of the available alcohol. Being a commuter school with no real party culture, UAB offers this course as an elective. Nine times out of ten, people who do this are UAB alumni.

3. UAB plays its home games at Legion Field, which played home to many Iron Bowls. That small tie to two of LSU's SEC West rivals is enough, right?

4. They stole their main logo from the Mortal Kombat dragon, I mean come on it's practically the same thing

6. Graeme McDowell, professional golfer, also went to UAB. But that isn't necessarily a reason to dislike UAB. McDowell is the exception to the rule that all UAB athletes, past and present, are jerks (see: Joe Webb, Roddy White).

7. UAB doesn't even have enough history for me to make a full list of ten reasons to hate them like I planned, so I'm going to stop here.

But really, I hope we start kneeling the ball with five minutes left in the game because we're up eleventy-billion touchdowns. Oh my God I hate UAB so much.

Also UAB has a dumb mascot. Seriously, it's just a stupid alligator/snake/hellbeast hybrid that looks like its a Sesame Street reject. 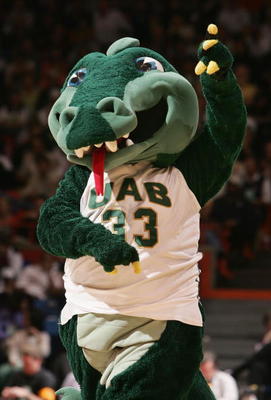 AND NO I'M NOT HOLDING A GRUDGE SHUT UP.