Hey folks, Zach here, instead of our house chef Billy. I'm new to this whole recipe thing, so before I get into the recipe proper, here's a bit of a backstory. If you follow me on any form of social media, you've probably noticed that I've been doing a lot of cooking lately. My girlfriend (hi Ali!) and her family got me a small smoker for Christmas. Since then I've more or less been on a journey to try and teach myself how to make decent barbecue. This serves as a disclaimer because I've only been doing this for a month, and I'm still a novice. If you have any tips for me, let me know.

I've managed to smoke a few pork butts well enough and learned how to make decent pulled pork (or so my friends say), using websites such as Jeff Phillips' Smoking-Meat dot com, which has been an invaluable resource for me on this culinary quest. On his website, Jeff has a recipe for smoked macaroni and cheese (with bacon!) that I had been dying to attempt. Last weekend I finally got up the gumption and made a modified form of Mr. Phillips' recipe. How did it turn out? To make a long story short:

Now then, on to the recipe! Please note that this recipe can also be used to make a great baked macaroni and cheese, since not everyone out there in the blogosphere has a smoker. Regardless, here's how I made it.

First and foremost, get some water boiling. Once it's ready, dump the 16 oz. of large elbow macaroni into the pot. If you're going to being using a smoker, cook the macaroni al dente, or just until it's slightly tough. Once the macaroni is ready, strain it, then rinse it with cold water to stop the cooking process. It'll take on more moisture in the smoker. If you're going to be baking it in the oven, cook it as you normally would cook pasta.

Next, cook the bacon to the point of crumbling. I did this by baking it in the oven at 400 degrees until it seemed about right, though mine didn't quite get the crumble point. Being the improviser that I am, I drained the fat off a bit and pulled it apart by hand. It worked well enough for me, but you might want to crumble it if that's your style. Set it aside, you won't need it for a few minutes (and try not to eat too much of it as you cook). 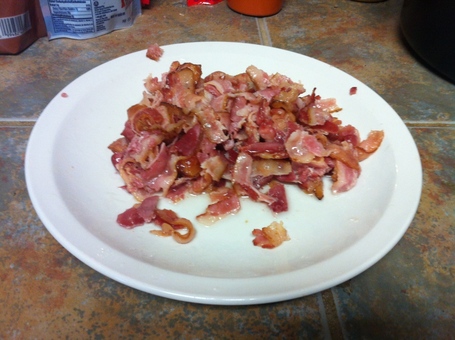 Now it's time for the best part: the sauce (woohoo!). It's flour-based, so it takes a bit of time to work with. First, melt the stick of butter at low heat. (Late disclaimer: I didn't pretend that this was healthy at all, and I advise you to follow my lead) 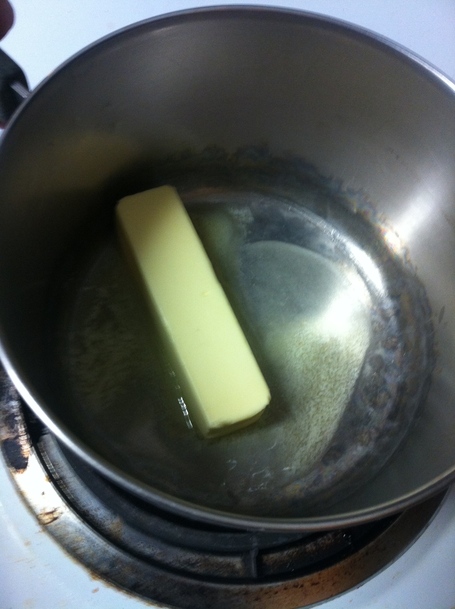 Mix the flour, salt, ground pepper, and paprika in with the melted butter. If possible, use a whisk to mix it in as well as you can. When doing this, be sure to try keeping your sauce from sticking to the bottom of the pot and burning on. 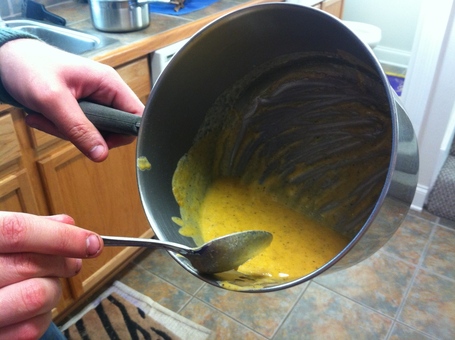 Once you've adequately mixed the butter, flour, and spices together, it's time to add the five cups of half and half. Keep stirring the pot with a whisk, and turn up the heat on your stove a bit to counter the coldness of the half and half. The half and half/butter combination should begin to thicken as it heats. 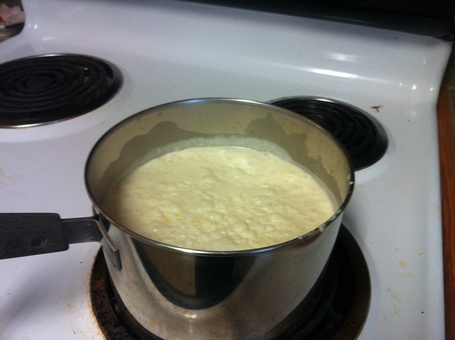 After much preparation, it's time to finish off the sauce. Take the half and half/butter mixture and add in the four cups of grated mild cheddar cheese. To expedite the process, I poured the cheese into another pot first, then poured the half and half/butter mix in onto it as I stirred. You should have a thick, yellow sauce once all is said and done. 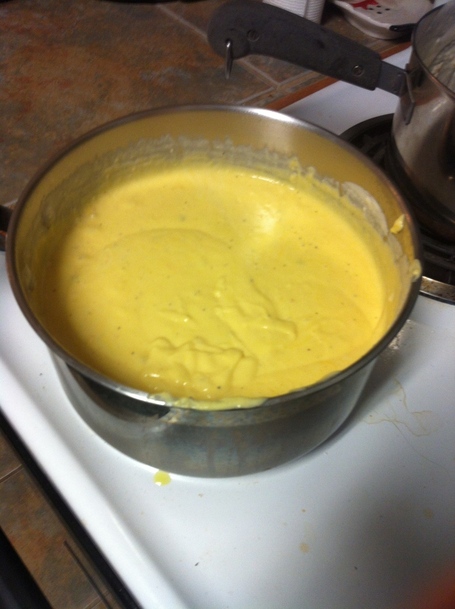 Add in the pasta to the completed sauce. The result looks delectable by itself, but now you've got to prepare it for smoking (or baking)! 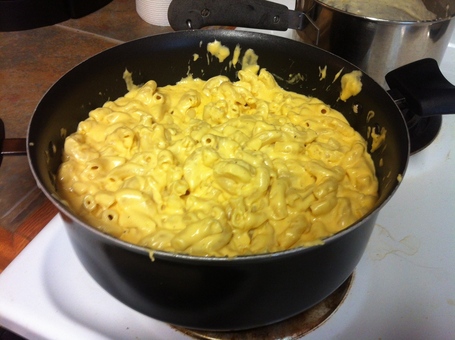 Add about half of macaroni/sauce mix to your baking dish (I used a modified, non-stick Dutch to fit my smoker), then add about half of your grated cheese mixture on top. Use as much cheese as you'd like for this, depending on if you like more or less. Add in the rest of the macaroni/sauce mix on top of the first layer of cheese, then top with bacon and the rest of the grated cheese mix. 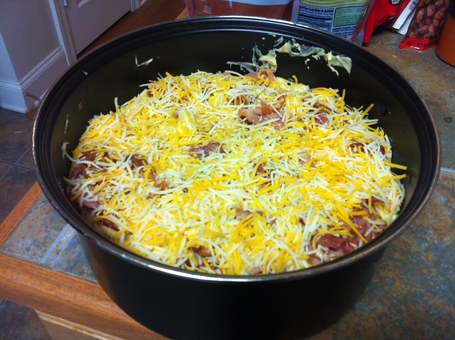 Now it's time to smoke or bake, depending on what your capacity allows for. If you're smoking it, get your smoker to around 225 degrees and add in your wood of choice (I used pecan), and put your baking dish in uncovered. The cook time will depend on how much smoke flavor you'd like for the whole mixture to take on. You can pull the dish out of the smoker when the top layer of cheese reaches the desired texture or color. I left it in the box for about 45 minutes, and the top layer was browned and overpoweringly smoky to some, so I stirred it into the whole pot in hopes of balancing it out (it worked). If you're working with an oven, I'd set it to 250 and let it bake until the edges of the top layer begin to brown 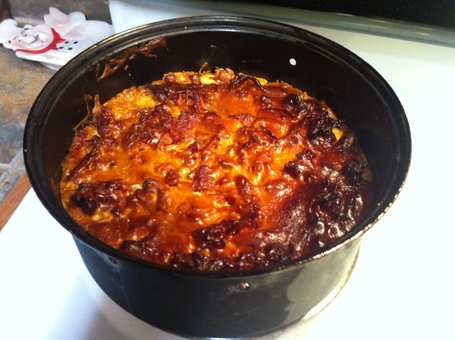 Here's what it looked like after I mixed it all together. 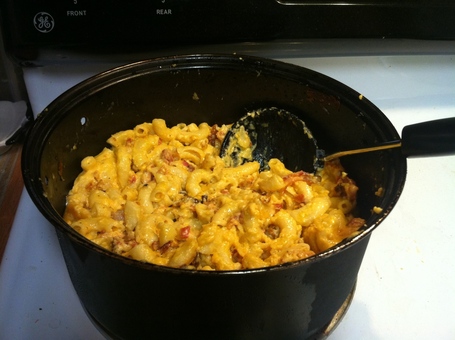 And there you have it! For an added twist, top the macaroni with some pulled pork (I had a butt in my smoker while the macaroni and cheese cooked) and a finishing sauce on top. The result is a somewhat strange - I was skeptical while trying this recipe - but I was very pleased with it. The smokiness mixes well with the cheese, and the gooey texture of the pasta and sauce makes it a very unique combination. Adding in the pulled pork turns the whole thing into a delicious bowl of un-health that will have you salivating. 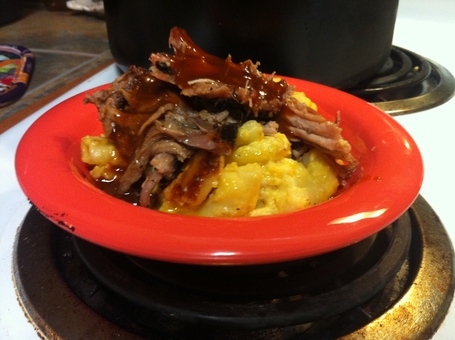 Once again, hat tip to Jeff Phillips at Smoking-Meat.com for all of his knowledge and expertise.