Tomorrow is the big day. Why not make it a little more fun with a little bit of drankin'?

If you're anything like me, the first Wednesday in February usually starts at the wee hours of the morning, typically with some bourbon-laced coffee and/or a Bloody Mary before moving on to beer around, oh, 8:30 A.M. Frankly, National Signing Day is as close to a National Holiday for me that I'm damn near close to filing a petition to have it officially instated. Ok, so you're nothing like me? Ok.

So yeah, go ahead and tweet me anytime on NSD, and I'll shoot back a pic of whatever it is I happen to be downing at the moment. I'm not kidding. Go ahead, hashtag it or something. #WhatchaDrinkinPaul?

But, you know, who likes drinking alone? We have a cure for that. Special thanks to all ATVS writers for contributing and friend of the site, Derek Ponamsky for his clever suggestions as well. Introducing: 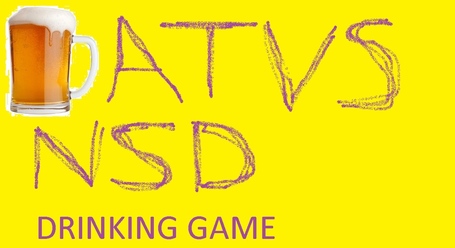 We should be used to a lot of these in our recruiting coverage (see also, the NFL Draft), but that doesn’t mean we can’t be tired of them. Drink whenever you hear the following:

Hat tricks. Puppies. Babies. Suspenders. Every year, some recruit finds a new way to make a spectacle of his college choice.Sometimes, their parents make the spectacle. This isn’t going anywhere, so you might as well enjoy it:

Recruiting coverage at ESPN is…something. Tom Lugenbill and the ESPNU crew do their best, and you’ll see tons of awkward current or former coaches that enjoy a healthy love-hate relationship with this entire spectacle. If you watch enough of it, you can almost predict what might happen:

This is what we’re here for -- to bear witness to some of the most important recruits in LSU’s history joining this program, and setting us up for more years of fantastic football under Les Miles. Do what an LSU fan does, drink up, and have some fun:

As always, drink responsibly you heathens. I'd prefer that none of you die... unless you are an Alabama fan. Then, I probably wouldn't care. Just kidding, I don't want you to die either. Watching you suffer when we beat you is too precious.

Feel free to add more rules to the comments below!